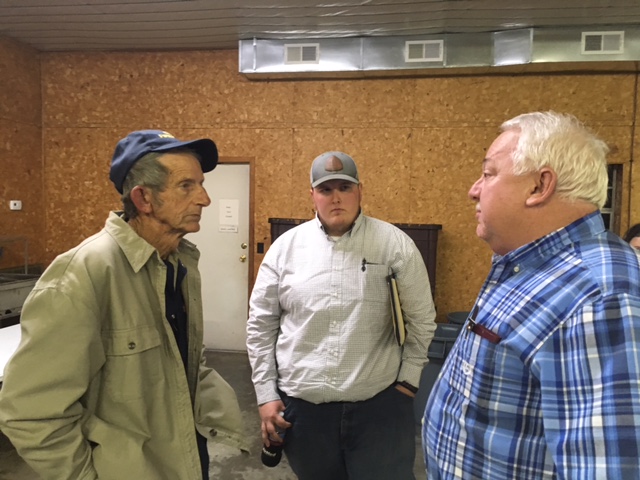 BETHSADIA – On Thursday evening the board of the Bethsadia Volunteer Fire Department (BVFD) met amid high department and community tensions over the recent mass resignation of seven members, including the assistant chief.  This departure leaves the BVFD with only four certified firefighters and no EMTs.  Local residents filled Bethsadia Station No. 1 to voice their concerns and hear from those involved on both sides of the controversy.

Dan Willingham called the meeting to order, and began with a call for peaceful discussion.  He offered to the public a clarification of the different duties of the board and firefighters, pointing out that the board's role is purely administrative with no direct hand in firefighting or EMT operations, and that the firefighters and EMTs are the ones who answer calls.

"I thank the firefighters," he said, "they're the real go-getters."

Willingham also addressed the resignees' claim that the board had done away with elections in 2011 by stating that such was not the case.  According to him, the lack of elections has been due to the lack of a quorum at the board's November meetings, when elections were held.  Under the bylaws, representatives of at least 30 households must be present in order to vote on board members.  Willingham went on to note that all current board members' terms have long since expired, but the board has continued to serve due to the lack of any elections.

As so many people were present with things to say, the board suspended the normal rules of order to go straight to public comments in their agenda.  Willingham opened the floor, asking that people speak one at a time and state their names.

The first question came from Janet Freeman, who asked simply, "Why don't you have another election?"

Willingham responded, "If 30 people show up, you can have an election."  He then went on to clarify the point that the bylaws are not currently worded to allow a special called election, except under specific conditions that did not appear to have been met.

It did not take long for the requested order to begin dissolving among speakers.  Questions came rapidly, occasionally on top of other questions, from anonymous speakers.  One man wanted to know if his household could move its membership to another local fire district, in response to which Joe Golden, president of the Cullman County Fire Association, walked the audience through the procedure for fire districting.  Another asked about the numbers of certified firefighters and EMTs, and was answered by BVFD Chief Buddy Carden that there were currently four certified firefighters and no EMTs.  Several questioners called for detailed explanations of the resignees' reasons for leaving.  One wanted to know the certification status of remaining BVFD members.  One wanted to know about training opportunities for firefighters.

In some cases, speakers had no questions, just frustrations to vent.  In several cases, these statements drew aggressive responses from board members, leading to loud verbal exchanges.  Increasingly, though, the questions and comments came to center on two topics: "What will it take to hold a board election?" and "What do we do in the meantime, without firefighters or EMTs?"

On the second question, board member Alan Edwards assured the audience that services could still be provided through the BVFDs partnerships with other agencies.

"Others will come to help: Logan, Good Hope, Cullman," he stated, "and people from Bethsadia will be there as well."

After yet another speaker asked about the resignees' reasons, former BVFD Assistant Chief Maurice Reynolds rose and spoke.

"This is not a witch hunt," he began. "We are not out for blood."  Reynolds went on to praise Carden for his many contributions to the BVFD and community, but also to question his ability to lead the department.  Among his biggest complaints about the chief was a supposed laxity on the issue of firefighter safety; he claimed that Carden had told inexperienced firefighters that they did not have to wear protective gear.

"Safety, safety, safety is my number one concern," Reynolds insisted.  "Yes, when we go out on a fire scene, we're there to put the fire out, but we've got to do it safely.  When we're out on a wreck scene, especially out on the interstate, we're there to help who we can with what we can, but we've got to do it safely."  He concluded, "There were several issues addressed, and there was nothing done about it."

Reynolds also addressed the issue of firefighter training, arguing that he had made efforts to find times on different days to accommodate all personnel, but that training sessions had been poorly attended.  Board member Jason Dean countered that the board had funded many training opportunities, and that the resignees owed something to the community for that.  He also took exception to the very public nature of the resignations.

"People have arguments all the time," Dean stated, "and when somebody has an argument, they come to that person and they hash it out, they try to make things better, and they don't go to the paper the next day and write up an article accusing people of different stuff, and then involve a Birmingham news agency to try to fight your battle for you when you should have just come to his house and sat down and drink coffee with him."

When public comments resumed, so did the calls for a special election.  The bylaws were still held up as a barrier, to which local resident Laura Nichols asked if the bylaws could be amended.  A short time later, her husband Jason Nichols read an excerpt from a copy of the bylaws that had been emailed to him during the meeting, which seemed to open the door for a change to the election date.  He then called on Willingham to bring such a change before the board, to which the attorney replied that such discussion by the board would have to wait until after public comments had concluded.

During this time, the conversation also began to involve the possibility of a resolution between parties that would bring the resignees back to the department.

Carden himself, quiet for much of the evening, stood and addressed the resignees who were sitting in the front of the audience: "Are you willing to talk to me?"

One audience member chimed in: "I want to see them back together, because at 2 o'clock in the morning I might need them."

During a short break at the end of public comments, Reynolds went up and spoke privately with Carden.

The board then moved into its business session, with many members of the audience staying to see the results.  Working through regular affairs, the board eventually came to new business.  At that time, Randall York made a motion to amend the bylaws to allow for a special election.  After amendments and discussion, it reads:

"If there fails to be a quorum at the annual meeting on the day designated, the meeting may be called and held as a special meeting, and the proceedings may be held as at an annual meeting, provided the notice of meeting shall be advertised in a newspaper of county-wide circulation, on the fire department Facebook account, and webpage at least 30 days prior to the meeting, with such meeting date to be set by a majority of the board of directors."

The motion to amend passed, though the proposal must be formally presented at the next meeting for a vote.

After the meeting, Reynolds told the Tribune that he and the other resignees intend to continue as firefighters and EMTs, probably with the Logan VFD, if things don't work out in Bethsadia.  He was also overheard speaking with Carden and planning an informal breakfast meeting for Saturday morning.