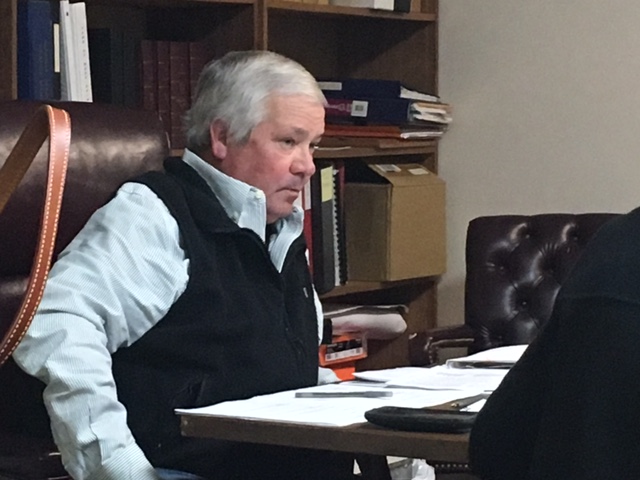 Mayor Kenneth Kilgo prepares to call the meeting to order.

The meeting got underway with an opening of the floor for public comment.  State Rep. Corey Harbison, R- Good Hope, addressed the council.  He said that West Point is not in his district, but the people of West Point are neighbors to and have close relationships with his own constituency, so the town and its leaders should not hesitate to call on him for assistance when needed.

The council then moved on to its consent agenda.  Kilgo presented the financial report, pointing out to new members that a formatting issue with the spreadsheet made the monthly report appear to contain a budget shortfall.  He assured the council that the town is, in fact, on budget and doing well financially.  He also reported that the town was able to pay all regular bills within budget, so the matter did not require a vote.  Road work, on the other hand, did go about $9,000 over budget; a motion to pay that bill passed without discussion.

Next, the financial report, along with minutes of the October and early November meetings, passed without discussion.

Kilgo then addressed the council about getting the new session off to a good start, recommending a 5 p.m. work session before the Dec. meeting.  He proposed a planning approach used at the beginning of the previous session in 2012, which he called SWOT: focusing on Strengths, Weaknesses, Opportunities and Threats to identify the biggest needs and biggest risks faced by the town and council during the current session.  Kilgo pointed out that, with the use of this approach last time, the top three identified needs had all been successfully addressed during that session.

The council then moved to old business, with the closely-related topics of the turn lane at the town's main Highway 157 intersection and economic development around that intersection.  Kilgo explained that Greg Black of Black Development, owner of Dale's in Hanceville, has been buying property along the highway near the intersection, with the intent of constructing a gas station and store.  Other construction, possibly including a grocery store, restaurant or even a strip mall is under discussion.  Kilgo was insistent, though, that whatever else is built there, Black's station and store is a "done deal."

The development of that project and adjoining properties will be helped by the construction of a 1,400-foot deceleration and turn lane along Highway 157 leading to the intersection.  This construction will require the relocation of the sewer pumping station near that site.  Kilgo explained that, if the town will secure the necessary permits, the site developer has agreed to pay construction costs, including relocation of the pumping station.  To cover the cost of pre-permit engineering work, the permit itself, and multiple inspections, he proposed the allocation of $15,000 to cover all town expenses.  A motion to allocate passed.

Two related issues found their way into the discussion.  A question was raised about the ability of the current sewer system to serve the new developments.  Kilgo assured the council that the system currently operates at less than 50 percent capacity, and all new development will not add up to enough increase to overpower the system.  A second question concerned the potential impact of the new businesses on existing business.  Kilgo responded that the council's job is not to protect one business from another, but to do what is best for the town as a whole.

The council then moved to one order of new business: the question of whether to give the town clerk and parks and recreation director a raise or a one-time pay adjustment (which was done last year).  The decision was made to follow last year's policy, and the council voted to give each of the two a one-time $2,000 adjustment.

Kilgo then gave his report.  He noted that the fire station project was continuing, and that the town's Christmas lights will be going up this week.  He then addressed the West Point Elementary School playground project, suggesting that the town could help get grants for the renovation project if the school signed a joint use contract with the town for the playground and tennis courts.  Kilgo concluded his report by inviting new council members to participate in an upcoming Cullman Area Chamber of Commerce trip to Montgomery, to meet and speak with legislators.

When member reports were requested, only Town Attorney Dan Willingham spoke.  He offered three pieces of advice about how to generate tax revenue for the town:

-Tell West Point residents to make sure they let court staff know they are town residents when they buy their car tags.

-Encourage local residents to annex their property to the town, noting the advantages of being in-town residents.

-Encourage local residents to buy their gasoline in town, as the fuel tax remains completely in the town, while many other taxes do not.

There being no other business, the meeting adjourned.