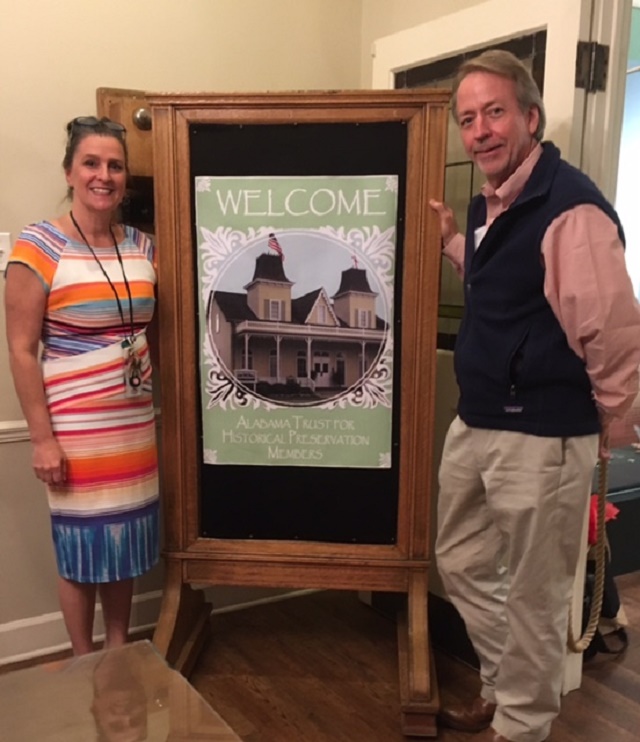 CULLMAN – If you see strangers wandering around Cullman this weekend, staring at old buildings and taking pictures, it's okay. They're on our side.

On Friday, the board and other members of the Alabama Trust for Historic Preservation arrived in Cullman for a three-day visit.  In a program known as the Preservation Lyceum Series, the Trust schedules weekend group tours in various towns, so its members can learn more about historic places and preservation efforts around the state.  In information provided to the Tribune, the Trust explains the series as an opportunity to "travel the highways, byways and crossroads of Alabama exploring, experiencing and engaging in preservation."

According to the Trust's First Vice President Bo Osborn, the group's decision to come to Cullman was based first on a simple lack of experience in this area: "We've just never been here before," he laughed.  As the group studied the Cullman area, preservation and reconstruction of historic structures in the wake of the 2011 tornadoes also became a big point of interest.

The Trust's board met at the Cullman County Museum in the afternoon, and were joined by others in the evening for a lecture and reception led by the museum's Events Coordinator Julie Burks.  Also on hand to greet the visitors were Cullman Mayor Woody Jacobs and Councilman Andy Page.

Burks gave a presentation on the early history of Cullman County and city, then focused on the city's efforts to rebuild its historic downtown after the 2011 tornadoes.  She noted how the rebuilding effort emphasized preserving the traditional feel of downtown Cullman through the Facade Improvement Program and other plans.

After the presentation, guests were treated to food and drinks in a reception sponsored by the Cullman County Historical Society.  Then the museum's tour area was opened for casual touring, with mood music provided on dulcimer and banjo by local mountain music performer Dr. Bill.  After the tour, Trust members headed out for supper at the Cotton Gin.

On Saturday, the group will visit the Abbey Church and Grotto at St. Bernard Abbey, then go to Southern Accents Architectural Antiques to discuss artifact rescue efforts with owner Garlan Gudger.  The group will enjoy lunch at All Steak, then will have the option of walking or driving tours around Cullman before finishing the day with a tour and supper at Peinhardt Farm.

On Sunday, the group will have brunch at Top of the Town, then tour the Shrine of the Most Blessed Sacrament in Hanceville, before heading home.

For more information about the Alabama Trust for Historic Preservation, visit www.alabamatrust.info.