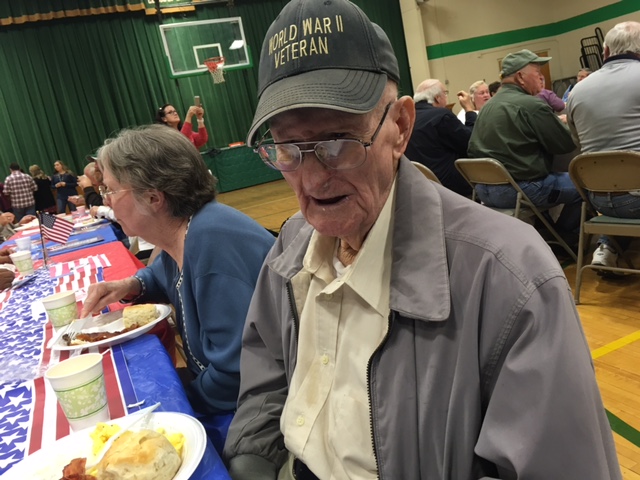 HOLLY POND – On Thursday morning, Holly Pond High School (HPHS) invited local veterans to breakfast at the school.  The event, put on by the Key Club and Builders Club, was expected to serve between 60 and 75 vets and their spouses.

Bob Palys, a retired HPHS teacher, still volunteers as the Key Club's sponsor.  He, his wife Melba and club members did all the preparation, cooking and serving.  Palys sees the event as an opportunity to honor those who served.

"We do it in respect for veterans and celebration of our freedom," he said.

Around 30 students and adult volunteers worked together over the last two weeks to get ready.  According to Palys, everyone was eager to help.

"We have the utmost respect for veterans," he said.  "I've never had trouble getting volunteers to work."

Veterans from the Korean and Vietnam Wars through Iraq and Afghanistan were honored.  Folks were mourning the lack of remaining WWII vets, when in walked Earl Howard, a 91-year-old infantry machine gunner who served under Patton during the liberation of Europe.  He was a special treat, entertaining listeners around the table with stories of his adventures in Belgium and Germany.

The respect shown by the club and school to community veterans is returned in kind.  Vietnam War Marine vet Bartee Bryan has attended all 24 breakfasts, and speaks highly of the program.

"You don't know how proud we veterans are of Bob and the Key Club," he said. "It's a great tribute to the veterans.  It's one day a year when these men and women get recognized for what they did, and it gives these kids an opportunity to meet and talk with these veterans.  The interaction is great."

HPHS Key Club President Landon Hunter summed up the school's feelings about the breakfast.  "We just want to say 'Thank you' to all the veterans for all their service.  This is the least we could do."

Later, the school celebrated local veterans with a heartfelt and touching ceremony. The elementary, middle and high schools – as well as a few of the townspeople – gathered in Felton Easterwood Gym and were soon joined by the veterans in the community, who had just been served a complimentary breakfast by the Key Club. Their entrance was celebrated with a standing ovation from the crowd and a medley of J.P. Sousa's music played by the band.

A few members of the Cullman JROTC presented the flags for the pledge of allegiance, and a small ensemble from the choir sang the national anthem as the ceremony began. Vice Principal Steve Miller welcomed everyone to the assembly and thanked the veterans profusely for their service and sacrifices. He then announced a break in tradition: instead of having one of the veterans come up to speak to the students, the students would speak to the veterans.

Freshman Alliyah McGriff was the first to speak, giving a warm and thankful speech to the veterans in attendance and commending them on their bravery. Evan Rainey, the sophomore speaker, delivered a speech about the history of Veterans Day and heavily emphasized the importance of both the holiday and the people it celebrates. After he finished, the ensemble came together again to serenade the gym with the classic hymn "It is Well with My Soul."

The song was followed by a speech from junior Kolby Holcombe, who also gave her thanks to the men and women in attendance for their sacrifices and courage. The final speech was delivered by senior representative Andrew Shaw, whose speech placed the utmost importance on honoring and thanking those who fought for our freedoms. This heartwarming declaration concluded with Andrew thanking the veterans for the freedom and opportunities that they have secured for "us, our children and our children's children."

A moment of silence to remember the fallen soldiers came after the speeches, with Taps played by senior band member Mackenzie Weaver. The assembly was concluded after a short but respectful video, after which many people stayed behind to talk to the veterans and thank them personally.