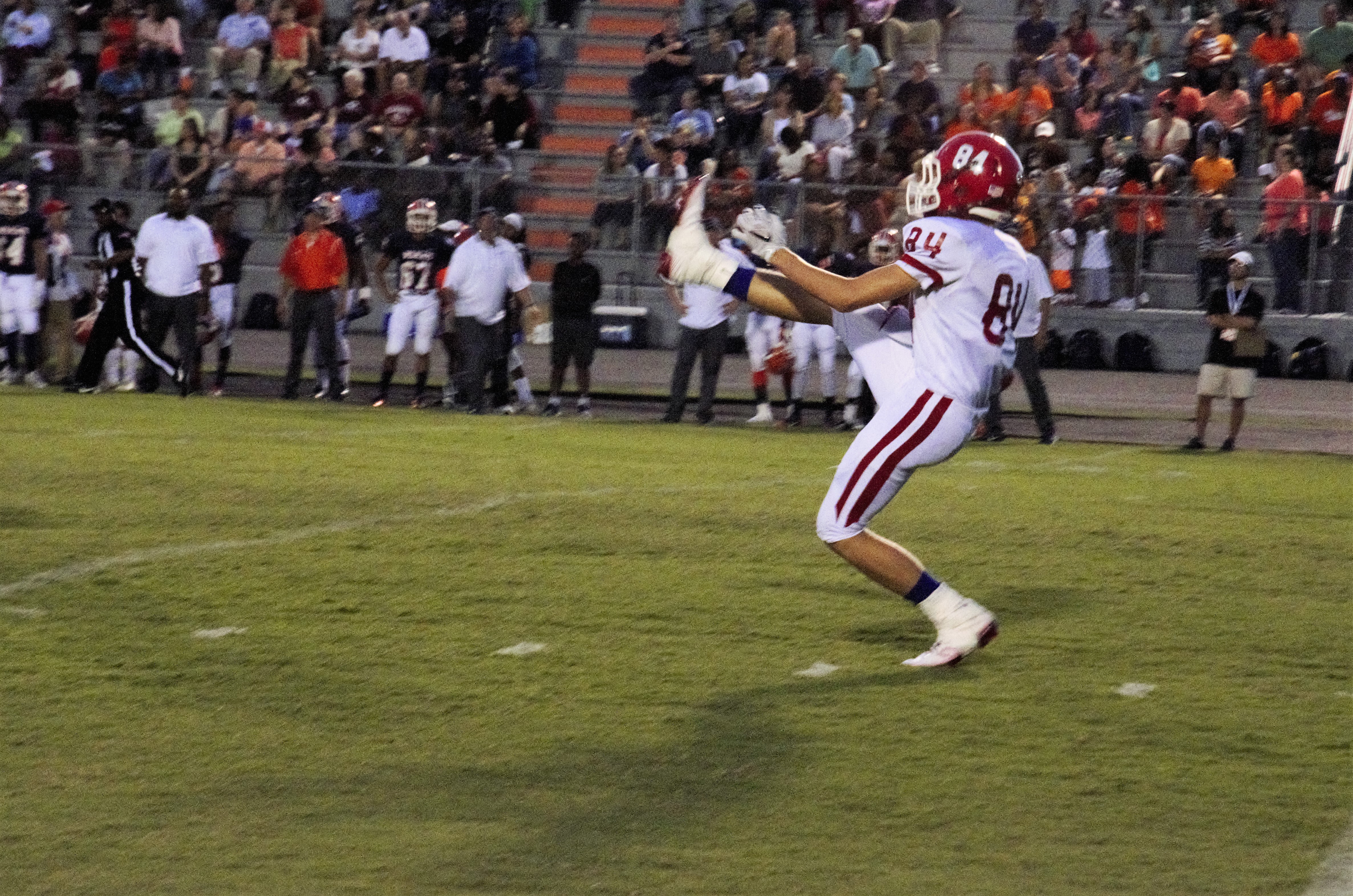 FULTONDALE – It was a rough night for the Vinemont Eagles as they took Interstate 65 into Fultondale to take on the Wildcats. Fultondale rattled off 326 yards of offense on their way to a 55-14 victory.

It looked like both teams were in for a long night in the turnover department early in the first quarter. Vinemont’s Garrett Boland recorded the first turnover of the game, ending an early Wildcat threat when he jumped the route and intercepted freshman quarterback Jayson Jones.

Fultondale quickly took possession of the pigskin when Brandon Kelley fell on a loose ball that was put on the ground by Vinemont and took full advantage of the turnover. Walter Blair got things going with a 28-yard rush down to the Eagle 10 to set up a first-and-goal to go situation.  Two plays later Jones was in the end zone from a yard out. The PAT was successful and Fultondale took the 7-0 lead late in the first quarter.

Not wanting to be outdone, Vinemont put together a drive of their own at the end of the first quarter and it came to fruition just 1:04 into the second when Boland connected with senior wide receiver Colby Nicholas for a 27-yard TD strike. Vinemont converted the PAT and quickly tied the game at 7-7 with 10:56 left in the half.

Fultondale quickly broke the tie on their very next possession when Blair took the handoff from Jones and sprinted 75 yards down the near sideline for the score. After the PAT, Fultondale took a 14-7 lead that they were never in danger of losing.

Vinemont set up shop at their own 35 on the next possession but they were unable to move the ball and were forced to punt to Fultondale. The punt was a good one and took one Vinemont bounce. It was scooped up by Austin Alexander for the Wildcats in a risky move as he was surrounded by Eagles, but he made the first two defenders miss and then he was off to the races and the end zone for a 73-yard punt return for a touchdown. Following another Vinemont three and out, Fultondale crossed the plane of the goal line again, this time with a leap over the line by Jason King for the 1-yard plunge. The PAT was good and put the Wildcats on top 28-7.

Down but not out, Vinemont showed some flashes of brilliance on their next drive. Boland connected with Nathaniel England twice on the drive for a total of 47 yards, helping to move Vinemont deep into Fultondale territory, all the way down to the six. Boland took to the air one more time in the drive with mere seconds left before the half but unfortunately for the Eagles, the ball found the hands of Ga’quincy Mckinstry of Fultondale who returned the ball 98 yards for the pick six. Following the PAT, Fultondale took a commanding 35-7 lead to the half.

Fultondale added touchdowns on their first three possessions of the second half, a 1-yard plunge by James Gowdy, a 10-yard TD pass from QB Jones to Khalil Yow and a 4-yard score from Blair, putting the Wildcats up 55-7. Vinemont found pay dirt for the second and final time when, in the fourth, Jack Hill found England over the middle for a 19-yard touchdown.

Vinemont played hard and left everything on the field but could not overcome the early onslaught by Fultondale, falling to the Wildcats 55-14.

Vinemont falls to 1-3 overall on the year as they prepare to travel to Addison next week to take on the undefeated Bulldogs, who trounced Lynn 48-14.