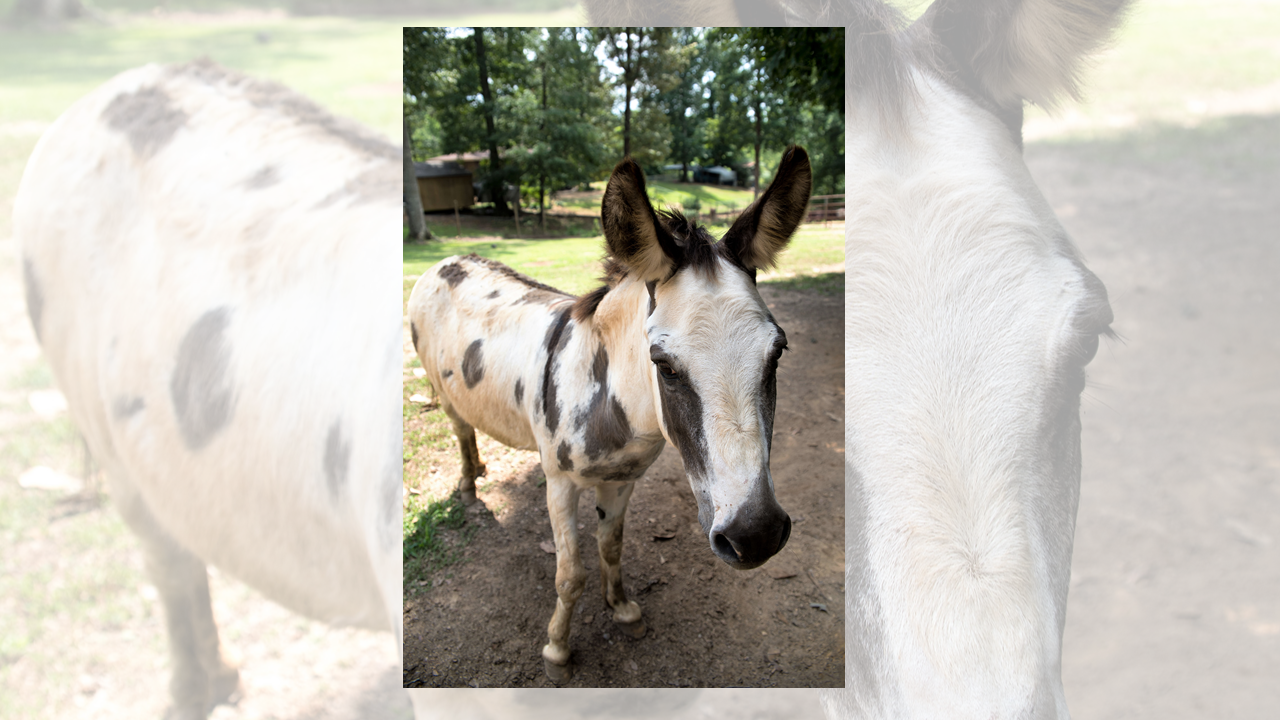 With his playful personality and a mischievous twinkle in his eye, Noah keeps life fun at the sanctuary and reminds Shaffer daily why she dedicates most of her time to animal rescue.

"That's mama's sweet baby," Shaffer said of Noah, whom she named after Noah in the Bible because the two have similar survival stories.

God commanded Noah to build an ark that saved him, his family and many animals from drowning in the flood. Shaffer saved Noah from drowning on the day he was born about 12 years ago.

"I thought he was dead," Shaffer said. "I breathed life back into him. This is the result."

Noah matured quickly and never re-joined his fellow donkeys. He spends his days playing with a large, blue plastic ball in a fenced-in area at Shaffer's sanctuary.

Noah lets Shaffer know when he wants her to throw the ball so he can fetch it. He also lets her know when he's finished sharing the ball.

Another rarity at 2nd Chance is Buck, a half-donkey, half-zebra Shaffer found on her property.

When Shaffer relocated from Warrior to the 16-acre property in rural Blount County in 2010, she inherited pot-bellied pigs and Muscovy ducks. She has given some of the ducks away, but they continue to multiply, as evidenced by the unending supply of eggs Shaffer finds around the property.

Over the years, she also has had a Pygmy goat named Grace that she rescued and took care of for 13 years; multiple rabbits; a box turtle she found in her back yard one day; five horses; and a pond full of catfish, bream and bass.

Shaffer said her veterinarian once praised her rescue efforts.

"He said 'You save them when I can't. You just will them to live,'" she said.

Shaffer's horses include 34-year-old Tony, who was her Arabian show horse and 1991 state halter champion; 21-year-old Platinum Persuasion, a half-Arabian, half-quarter horse; Dallas, whose dad was a paint horse; Angel, a white Appaloosa mare and rescue; and Draco, a black gelding.

Shaffer spends about $150 a week on grain to feed all five horses. Digestible grain for seniors costs $19 per 50-pound bag.

Shaffer spends between $40,000 and $50,000 each year to keep the sanctuary open. With about 46 dogs, 15 cats, the other animals and facility maintenance costs, her budget is stretched to the limit.

Donations are Shaffer's primary need and ensure the sanctuary, a non-profit organization and no-kill facility, continues to be a haven for animals in need of a temporary or permanent home, depending on their adoption success.

All donations to the sanctuary are tax-deductible. Checks can be made to 2nd Chance Animal Sanctuary, P.O. Box 193, Hayden, AL 35079.

Donations also can be made via PayPal at sshaffer01@bellsouth.net.

For more information about the sanctuary, email Sandra Shaffer at sshaffer01@bellsouth.net.