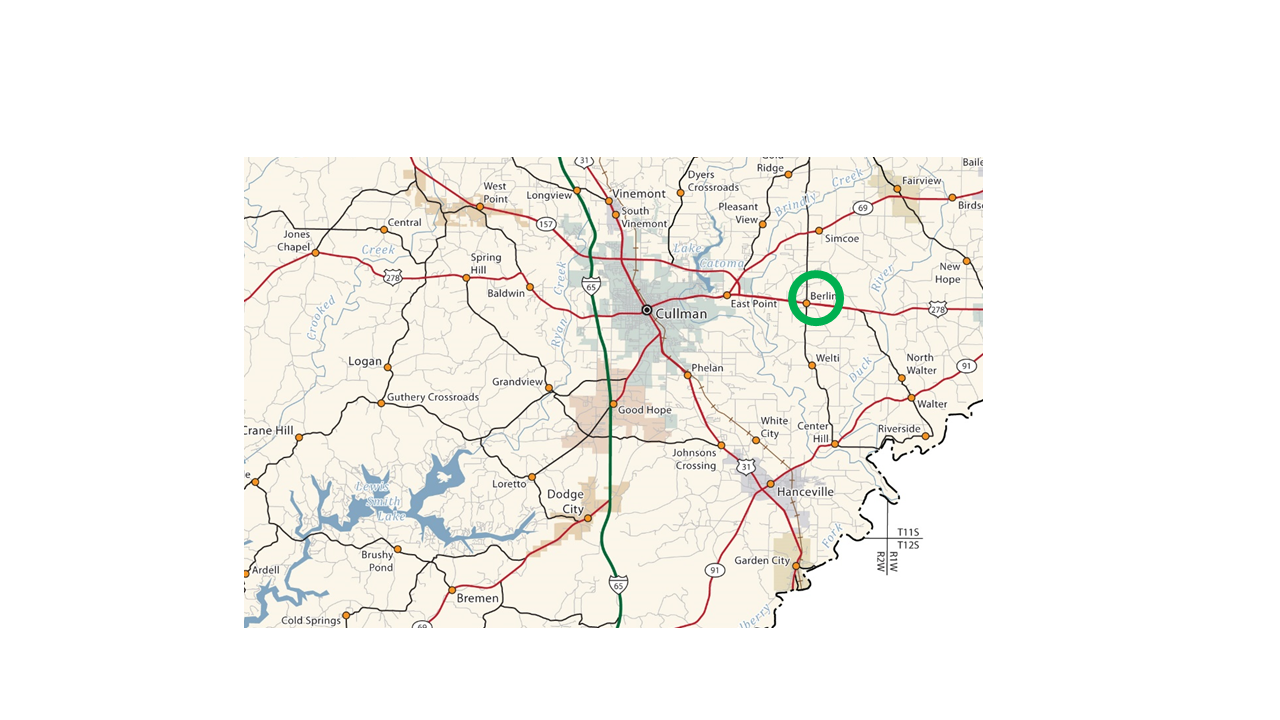 BERLIN – The community of Berlin is taking the first steps toward incorporation. This Saturday, April 9, there will be an open house at the Berlin Community Center from 2-7 p.m. Residents are encouraged to attend to get information and, most importantly, sign the petition for incorporation.

Community member Patrick Bates has taken a lead role in driving the incorporation efforts forward. Bates researched and produced an informational pamphlet for everyone in Berlin. He also created a presentation to share with the community. All of that information and more will be available at the community center on Saturday. Bates and others will be on hand to answer any questions and to collect signatures.

Berlin, located in east central Cullman County, about five miles east of Cullman, is "one of the oldest, most densely populated communities in Cullman County that remains unincorporated."  The community is centered around the intersection of U.S Highway 278 and County Road 747, known as Walker's Corner.

And how many people actually live in Berlin? Bates says that the precinct area is 16 square miles with somewhere between 2-3,000 people; however, the incorporation at first will only involve 2-3 square miles. He estimates that area includes between 800-1,000 residents. "I think we'll fall above the Vinemont and Holly Pond range, size-wise."

According to Bates, a significant amount of tax revenue collected from residents of the Berlin community is redistributed elsewhere due to Berlin being unincorporated.

Bates said, "There's other people in the community that want this (incorporation) for other reasons, but my main reason is financial. We pay into taxes and that money gets redirected elsewhere. We want them to benefit our community."

He says that the first question everyone asks him is "How much are my taxes going to go up?" According to his research, he said, "They shouldn't go up at all. We already pay the taxes. They're just going to other things in the county. Incorporating would mean that money would go into our town."

Here are some facts and figures that Bates has compiled for consideration:

Sales Taxes
Cullman is unique in that sales taxes are uniform across the county at 8.5% (exceptions being City of Cullman, Fairview and Dodge City which have an additional 0.5%). A $100 purchase made most anywhere would be subject to $8.50 in sales tax and distributed roughly as follows:

The tax revenue for other municipalities is split among them based on population. With a population of only 500, in the last three years Berlin would have received:

Bates also cites additional population-based taxes which would provide revenue to Berlin, such as gasoline taxes and payments made by TVA in lieu of property taxes.

Thanks to data available for the various taxes, according to Bates, it is possible to estimate the revenue Berlin would have received from the major sources during the 2015 fiscal year:

If the incorporation happens, Berlin will face the one required duty of a town: road maintenance. That includes everything from repaving, patching and mowing. The town could contract with Cullman County or solicit bids for the jobs. The Berlin community contains between 20 and 30 miles of public roads, not including U.S. Highway 278.

Besides the financial benefits, Bates says the second biggest positive would be parks and recreation. "Right now we have no public parks. We could have parks or playgrounds for families and walking trails. We do have the ball field, but that's it." Alabama law provides for towns to operate a variety of public grounds, he says.

Another area a newly incorporated Town of Berlin would face is public safety. Bates thinks the town could consider contracting with the Cullman County Sheriff's Office and the Berlin Volunteer Fire Department to improve services. The town could also apply for its own ISO PPC fire rating, potentially receiving a rating lower than the fire coverage district at large.

So what are the next steps?

As far as a town hall, Bates says that in the short term, the council might use Berlin Community Center.