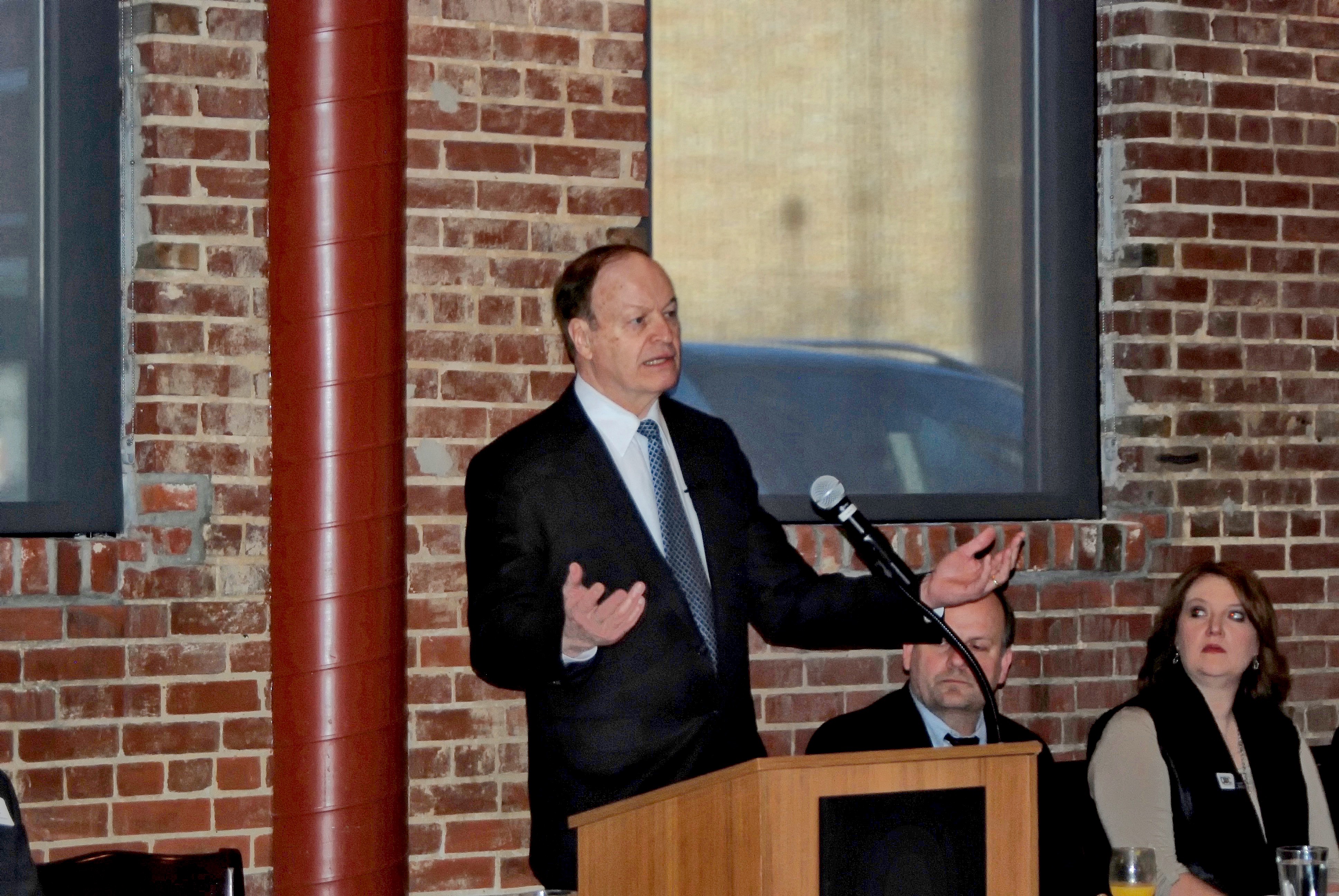 Because of your help I have been placed in a position of power which I want to use for the good of the nation, you are certainly a part of that.”
Sen. Richard Shelby

CULLMAN – The Cullman Area Chamber of Commerce hosted a special breakfast for members of the community Tuesday morning, with special guest U.S. Sen. Richard Shelby, R-Ala. The senator gave an update on what’s going on in Washington D.C.

Sen. Shelby spoke highly of Cullman County. He praised the town, saying, “Cullman is a clean city and you keep it that way. It says a lot about you. You work hard and you have a good work force. It is a good place to live and a good place to do business.”

The senator did not shy away from the controversial topic of gun control and his belief in the Second Amendment.

“I’m a Second Amendment kind of guy,” he chuckled and told the crowd a joke. Then he got serious and continued, “I believe we have a constitutional right (to own guns). It’s in the Constitution, Second Amendment. Most gun owners in America don’t commit a crime. Do you believe for one second that terrorists are criminals that own registered guns? Look at Chicago, Illinois. It is one of the most restrictive gun areas in the world and it is also the murder capital of the United States. Seems like some correlation there. That’s what we are fighting in Washington, among other things.”

The Syrian refugee crisis also came up, and the senator was clear in his stance against Syrian refugees coming to the United States.

“We don’t know anything about these people,” he said. “You know that out of so many, there is bound to be a terrorist, terrorist sympathizer or would-be terrorist in there. Even the F.B.I. Director says it would be very hard to evaluate, or vet these people, yet they plow on in. What is going on in America,” he asked. “Do you ever ask that question? We do too.”

He went on to talk about France and its reactions to the bombing attacks of late last year.

“The president of France, who is a socialist, the ultimate socialist, when they had the bombings in Paris, what does he do,” he asked the audience. “A socialist, he locked down the borders. He sent the police, their alpha team out. What does Obama do? He basically said it was all caused by global warming. What planet is he on? What’s going on? Don’t you ask those questions?”

The senator could not have been clearer in his disdain of President Obama.

“Americans have witnessed time and time again a president who completely disregards the rule of law, the Constitution and separation of powers,” he stated. “From amnesty to gun control, I will continue to say no to the president’s out-of-control executive fiats.”

Sen. Shelby concluded his talk by taking a few questions from the audience, thanking everyone for the opportunity and asking for support in his upcoming election.

“Because of your help I have been placed in a position of power which I want to use for the good of the nation, you are certainly a part of that,” he smiled.