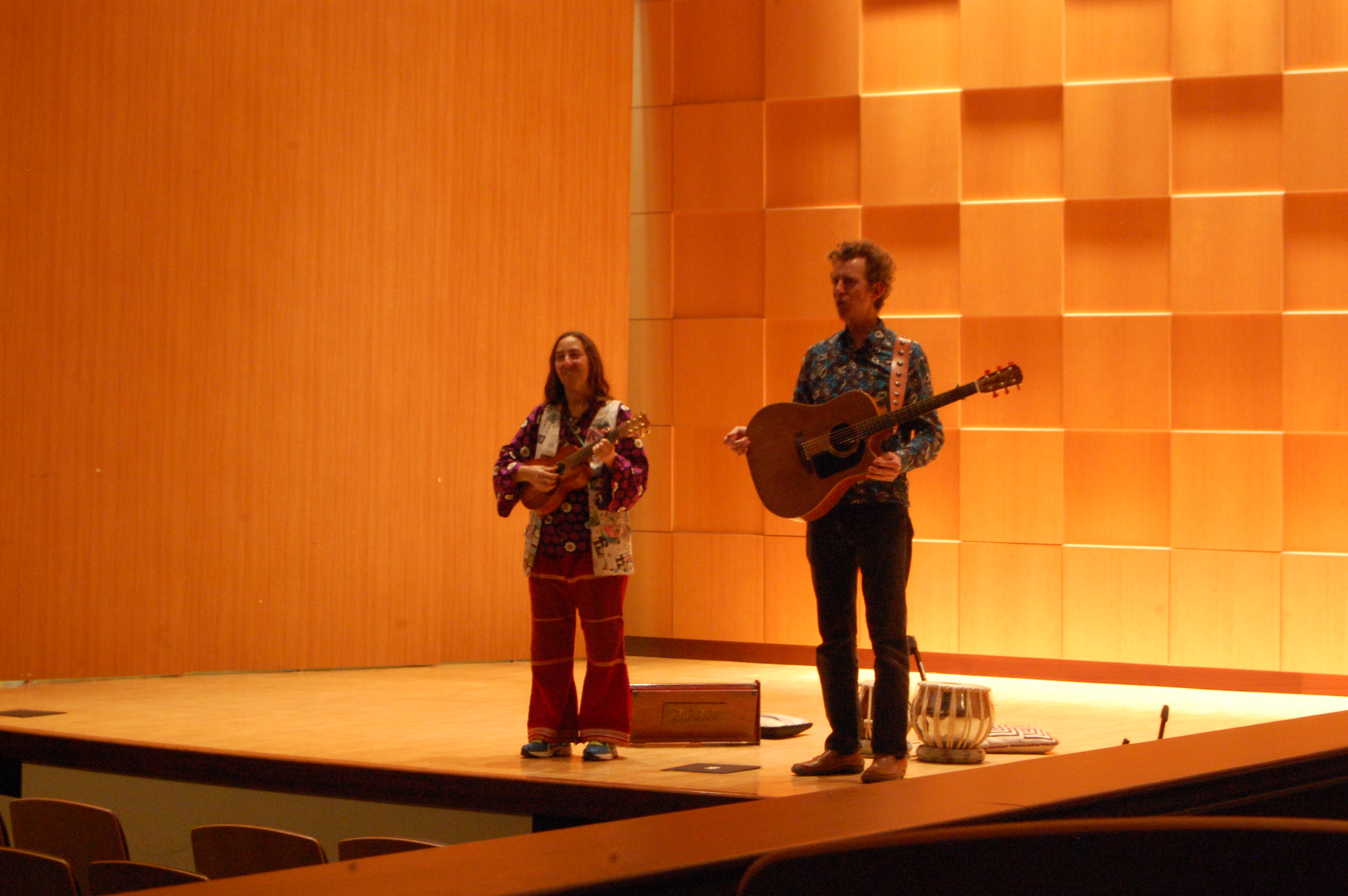 HANCEVILLE – The Southern Circuit Tour of Independent Filmmakers brought yet another engaging and entertaining film to Wallace State Community College called “Go With Le Flo”. The film was shown last Thursday evening and was accompanied by its filmmakers, Robyn Rosenkrantz and Michael Glover. Together, the two performed songs from their band Bright Blue Gorilla and also answered questions following the film.

In 1990, Robyn and Michael quit their L.A. jobs, sold everything they had (except their guitars), and bought one-way tickets to Europe. After landing a deal with Virgin Records, they launched their own company, Bright Blue Gorilla, and began making CDs and touring the world. They have written, directed and produced five feature films, 11 CDs and have had over 3,000 live performances to date. They enjoy charming audiences around the world with their music and movies.

“Go With Le Flo” is a romantic comedy in German and French shot in Berlin. Robyn said that some Berlin designers gave their original clothing designs for the actors to wear, and Berlin businesses offered beautiful locations for filming. One clothing store in Berlin let them take 15,000 euro (over $18,000 in US dollars) worth of dresses to wear around the city for their film. “The businesses in Berlin just welcomed us with open arms,” Robyn said.

“Go With Le Flo” features the main character, Florian, as a half-German, half-French owner of “Le Flo”, which is a French delicatessen in Berlin that specializes in salami. When Florian meets Camille, the daughter of a French director, it is love at first sight. Florian asks her to marry him, but does not know that she is already engaged to a movie star. Florian’s best friend, Jenny, is German and owns a bakery just down the street. She is in love with Florian, but does not know how to tell him. “Go With Le Flo” is a charming story about finding true love and taking chances.

The film includes a cast and crew of 200 people from 20 different countries. “All the actors would come on their day off. They just wanted to hang around and help out. That’s the nice thing about independent filming. It really becomes like a big family. It’s a real special atmosphere,” Robyn said. Michael added, “We really try to bring everyone together and it creates such a nice atmosphere.” Robyn said that the film was about 45 days of shooting over a 3-month period, and included 2 to 3 months of preproduction where they would cast, rehearse and scout locations to film.

“We really enjoyed making the film, and we’re about to go right back into another film in February,” Robyn said. She said that they really appreciate their audiences helping them spread the word. “That’s really how independent cinema gets around,” she said. If you would like to check out some special features of “Go With Le Flo”, you can check out the movie website to see interviews with the actors and behind the scenes videos at www.gowithleflo.com. The movie also just had a worldwide release on iTunes. Michael said, “It’s pretty easy to get music on iTunes, but getting a film on iTunes is difficult.” They are excited about the release and also added that it can be viewed on Amazon and Google Play.

Inspiration for stories comes from Michael making notes when he gets an idea or hears a little joke. He said that no matter what it is, he writes it down. Over time, he has enough to make a script. “I write the scripts in about a week because I have all the notes, and all the scenes start to work out in my head,” he said.

Robyn said, “With traveling so much, you meet so many interesting people and just hear so many people’s different stories. We get so much input all the time so it’s not hard to make up songs and stories I think. We’re very blessed to live this life as artists.”

Check out the film’s website at www.GoWithLeFlo.com and also visit www.BrightBlueGorilla.com to see other work by Robyn and Michael.