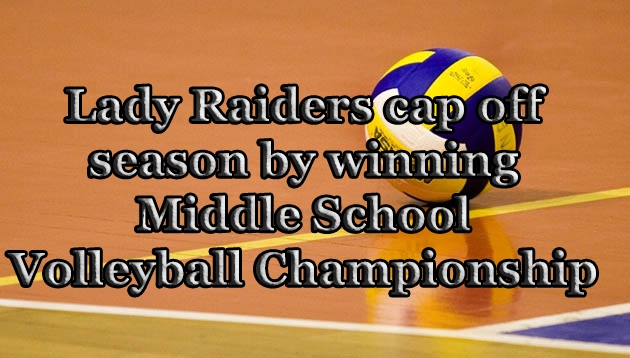 FAIRVIEW – Coming in as the No. 1 seed in the middle school division, the Good Hope Lady Raiders capped off a fine 2014 campaign by winning the Cullman County Tournament Monday evening without dropping a set in three assignments.

Good Hope downed Vinemont in the quarterfinal round 25-14, 25-11 then put Cold Springs out of contention in winning the semifinal assignment 25-11 and 25-9.

That set up the championship match with the No. 1 seed and the No. 3 seed Fairview Lady Aggies. Fairview had stunned No. 2 West Point in the semifinals 25-23 and 25-10. Fairview was down 22-17 in the opening set when the Lady Aggies went on a run and finished off the Lady Warriors to gain momentum for the rest of the match.

Good Hope served well in getting the lead to stay at 8-7 in the opening set. Four consecutive points on serve from Makailey Speegle extended the lead to 15-9.

A pair of points on serve by Chrissi Smith moved the score to 18-10. Then the attack was finished off by two aces from Bridgette Rollins, a service point from Sabrina Peek and Speegle scoring on a volley to close out the set by the final of 25-14.

Five points in a row by Rollins sent the Lady Raiders to a 10-2 advantage in the second game with Fairview desperate to stay in contention.

Alee Tucker got her chance to display an accurate serve and did as she tallied seven consecutive points and the lead grew to 17-4 for the Lady Raiders.

Kyler Hembree accounted for a block and a kill on the front line during Tucker's time serving with the Lady Raiders on their way of taking home the championship hardware.