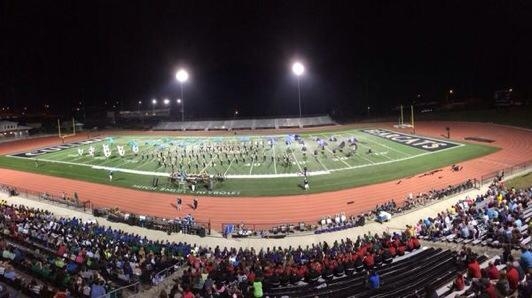 “The Band Exhibition was started 31 years ago by the local band directors at the time to provide an opportunity for the band students in the Cullman County area to come together and see each others’ halftime show performances,” explained Christopher Smith, Cullman High School’s Band Director. “Over the years, it has provided a wonderful opportunity for the bands in our area to perform, fellowship, and enjoy a wonderful night of music together. The event has grown into one of the premier events of the season for each band.”

There was something a little different about this year’s Band Exhibition. Not only was there delicious food available in the concession stand and thousands of happy fans cheering for their favorite bands, but there was an added attraction as well.

“This year’s exhibition will feature educational booths provided by NASA as a celebration of NASA week in the city of Cullman, which will conclude with the Cullman High School Band’s presentation of their ‘Space and NASA Themed’ show entitled ‘From the Earth to the Stars Above,’” Smith smiled proudly.

Each band’s performance was the result of many days of hard work and dedication from the many students, band directors, parents and booster organizations. Each school had unique and very entertaining shows and the crowd went crazy with applause as the bands marched proudly off the field.

Cullman Middle School, the youngest group of the night did very well! They performed “Pompeii” by Bastille and “Feel this Moment” made popular by Pitt Bull & Christina Aguilera. These guys may be young, but they show tremendous talent and will be a great asset to Cullman High School’s band when the time comes.

Hanceville High School marched to the tunes of Bruno Mars and a good time was had in doing so! They played Bruno’s hit songs, “Locked out of Heaven”, “Treasure” and “Runaway Baby”.

Vinemont’s band’s show was entitled, "Return to Graceland" the music of the King, Elvis Presley. They played “Can't Help Falling in Love”, followed by “Burning Love”. As a tribute to Elvis' days as the Gospel music singer, they did a version of “Amazing Grace” made popular by the drum corps Phantom Regiment.  To close the show, they performed “Viva Las Vegas”.

Cold Springs did a tribute to the Beach Boys and thrilled the audience with some of the most popular Beach Boys tunes. The band brought back all sorts of memories as they played “Little Old Lady from Pasadena”, “Fun, Fun, Fun”, “Kokomo”, “California Girls”, “Surfer Girl”, and “Surfin' USA”.

Holly Pond’s band was energetic as they performed “Sharp Dressed Man”, made popular by the Duck Dynasty series on A& E, “Let It Whip”, “Tactical Instinct” and “The Best of Yesterday's Memories”. Well done, Broncos!

West Point Band’s played suspenseful and daring music as they played and marched to themes from the infamous James Bond movies. The theme songs chosen for the band to play were “Goldeneye”, “Die Another Day”, “Casino Royale”, “Skyfall” and “Diamonds are Forever”.

Fairview High School’s show was called, “Disney Around the World”. They played selections from several popular Disney movies such as “Pirates of the Caribbean”, “Brave”, “Mulan”, “Lion King”, “Tarzan”, and “Song of the South”.

The Good Hope Raider Band performed a variety of songs. Clearly the kids loved playing the following songs in front of their peers, “Malaguena”, “Get Ready” by the Temptations, “Rubber Band Man” by the Spinners, “Hush” by Deep Purple, “Bad Medicine” by Bon Jovi, “Happy Together” and “We’re An American Band”.

As mentioned earlier, Cullman High School had a “Space and NASA” themed show. They performed “Enterprising Young Men” by Michael Giacchino, “Journey of Man – Flying” by Benoit Jutras, and “Prince of Thieves” by Michael Kamen.

We would like to thank the many folks who worked so hard in making the 31st Annual Cullman County Band Exhibition a success. The kids did a fantastic job! If you are not familiar with your local band program, I suggest you take a moment and watch them perform at the next football game. I promise you will be pleasantly surprised at how entertaining our local bands really are!

‘Serving the Community and Discovering the Difference’