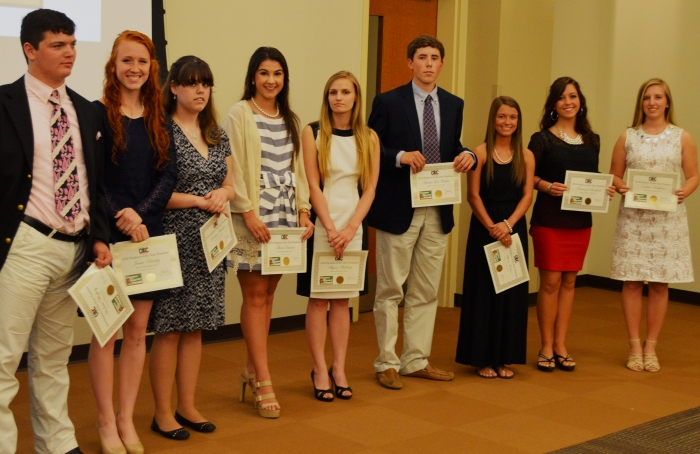 Cullman is home to some of the best and brightest students and teachers in the nation. Last Monday night, the Cullman Area Chamber of Commerce held the 2014 State of the Schools/Student and Teachers of the Year dinner to celebrate and honor these wonderful people. It was held at the beautiful new School of Nursing and Center for Science building at Wallace State Community College.

The event was presented by Chick-fil-A, and corporate sponsors included Cullman Jefferson Gas, Cullman Electric Cooperative and Wallace State. Knight-Free Insurance provided awards for the 2014 Student and Teachers of the year.

The evening began with the recognition of the head table and comments from Randy Earnest of Chick-fil-A in Cullman. Then a delicious dinner provided by Stone Bridge Farms was served.

Dr. Griffith spoke about the state of the Cullman City Schools. She is excited about the progress on the new Cullman High School building and is eager for its completion. She also stated that one of her goals is to keep Cullman the best place to raise kids in Alabama. Finally, she gave highlights of the Cullman City Schools from the last five years.

Billy Coleman’s main topic was the Cullman Area Career Center. He stated that it has recently blossomed with successful students. He also stated that the Cullman County Schools have a few exciting upcoming plans such as an alternative learning program for students whose circumstances do not allow them to graduate from a traditional high school.

Dr. Karolewics spoke about her excitement for Wallace State’s new building. She was happy to host the event in this beautiful and enormous new center for learning. She also stated that Wallace State has a new vision statement: “Learning Without Boundaries”. This will allow every students to reach his or her goals through Wallace State. She also announced WSCC’s new strategic plans entitled “Ready for College, Ready for Work, Ready for Life”.

Both students were very excited to have received such a prestigious award.

“It’s such an honor,” said Alexis Duncan, 2014 Student of the Year. “I’ve worked very hard my whole high school career. I’ve done a lot of extracurricular activities like National Honor Society, cheerleading and Leo Club, but I’m ready to start my next adventure at Jacksonville State next year. I’m just going to press on with my goals and I’m going to achieve them. This is a great honor for me.”

2014 Career Technical Student of the Year winner Isaac Lindsey also had some encouraging words to share: “I hope this shows everyone that hard work does pay off, and if you’re passionate about what you do and you work hard, anything is achievable.”