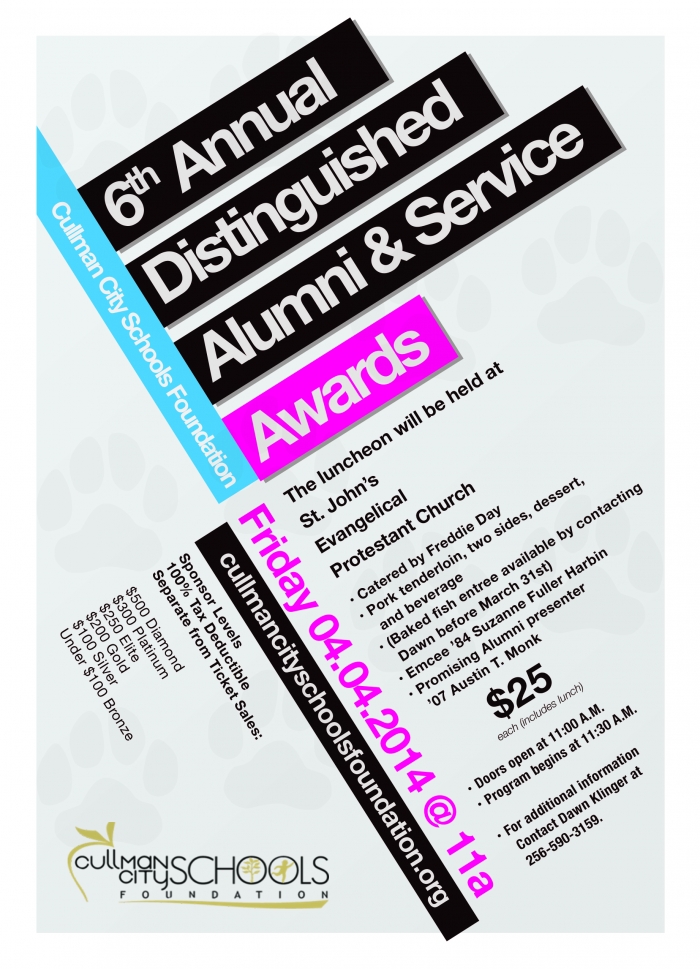 The 6th Annual Distinguished Alumni and Service Awards Luncheon will be held Friday, April 4 at St. John’s Evangelical Protestant Church in Christ Hall. Doors will open at 11 a.m. and the program will begin at 11:30 a.m. Tickets are $25 each and will cover lunch. All proceeds will benefit the Cullman City School Foundation.

This luncheon will be catered by Freddie Day. The lunch includes pork tenderloin, two sides, dessert and a beverage (a baked fish entrée is available by contacting Dawn Klinger before March 31). The promising alumni presenter will be Austin Monk, class of ’07, and the emcee this year will be Suzanne Harbin, class of ’84.

Executive Director of the Cullman City School Foundation Dawn Klinger is excited about benefiting classrooms through this event.

“The proceeds from this event will provide funding for the classrooms, which means we’re providing grants for teachers,” said Klinger.

At this award ceremony, several people will be recognized. Recipients of the Cullman City Schools Teachers of the Year award are: Jennifer Calahan, Renata Pickett, Joseph McPhillips, Branch Whitlock and Anita Moore.

“The city values Mr. Coleman very much,” said Klinger. “We really appreciate our good working relationship with him.”

Larry Taunton, one of the recipients of the Distinguished Alumni Award, is an internationally known Christian debater.

“He debates atheists and has a best-selling book from 2011, called “The Grace Effect,”” Klinger said. “It’s on amazon for 15 dollars, and we’ll have some copies available at the luncheon. Taunton is offering to sign copies of his book at the event.”

If you are interested in purchasing a copy of “The Grace Effect” or tickets for the 6th Annual Distinguished Alumni and Service Awards Luncheon, contact Dawn Klinger at (256) 590-3159. Tickets for this event will be on sale until Monday, March 31.