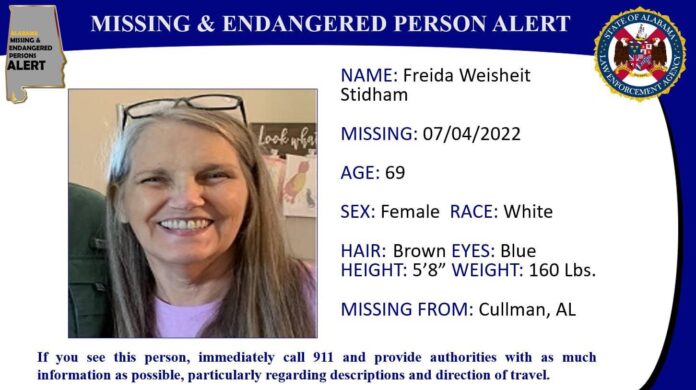 According to a release issued by the Alabama State Law Enforcement Agency (ALEA) Mrs. Stidham is a white female and may be living with a condition that may impair her judgement.

The CCSO released stated, “She was last seen on July 4, 2022 at approximately 1 pm wearing a pink shirt with the word “Nana” on it with green shorts in the area of County Road 1518 in Cullman, Alabama.”

Mrs. Stidham is believed to be in a white 2000 Chevrolet Lumina with Alabama license plate 25CK512.

“The investigation has also revealed that she may have recently been in Madison, Athens and Elkmont, AL and also in Ardmore and Pulaski, TN,” the release stated. “If anyone has any information regarding the whereabouts of Freida Weisheit Stidham, please contact the Cullman County Sheriff’s Office at (256) 735-2425. or call 911.”