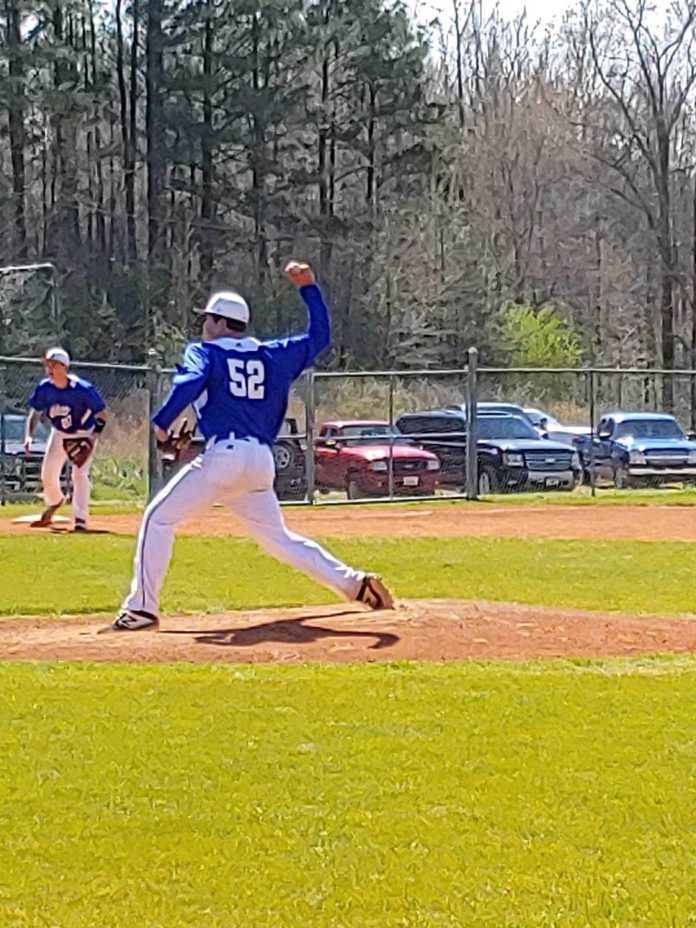 GOOD HOPE, Ala. – Addison traveled to Good Hope for a Tuesday afternoon matchup with the Raiders and it went down to the wire. In the end, it was the Bulldogs that were able to take the game 6-4.

Both starters pitched three scoreless innings, but the Bulldogs got on the scoreboard first in the top of the fourth on an RBI groundout by Hayden Lee. Good Hope tied the game in their half when Colton Williams scored on an Addison error.

Addison put up three runs in the fifth when Luke Waldrep hit an RBI double and two more runs came to score on a pair of Raider errors. The Raiders tied the game in their half of the inning on a Lane Speegle RBI single, Matt Hancock scored on an error and Speegle scored on a passed ball.

Addison cashed in on another Good Hope error later in the game when Connor Alexander hit an RBI single and Colten Tyree scored on a passed ball to give the Bulldogs a 6-4 lead. Good Hope loaded the bases with two outs, but Braxton Marshall popped out to end the game.

The Raiders trailed 3-0 after five innings but their bats caught fire in the bottom of the sixth and they took a 6-3 advantage into the final frame. The Tigers scored two in the top of the seventh to make it a 1-run game but couldn’t get any closer than that, allowing Good Hope to hold on and win it 6-5.

Colton Williams finished 2-for-3 with two RBIs in the win and Lane Speegle (one hit), Preston Bagwell (one hit) and Morgan Cook (one hit) each drove in a run as well.

Decatur took a 1-0 lead in the bottom of the third inning, but the Bearcats answered with five runs in the top of the fourth. RBI singles from Brady Patterson, Cole Fuller and Brennen gave Cullman a 5-1 lead. Back to back RBI triples from Cooper Back and Niklas Fondren helped stretch the lead to 9-1 going into the bottom of the fifth and the Bearcats pulled away to win it comfortably, 13-2.

Peyton Colvard went the distance on the mound for Cullman in the win, allowing just two runs on seven hits and collecting six strikeouts. Fondren was 2-for-5 at the plate with three RBIs for the Bearcats and Fuller (one hit) and Norton (one hit) each drove in two runs.

After a scoreless first inning, the Eagles plated seven runs in the top of the second to put the Aggies down big early and pulled away to win it with ease, 14-1. Jack Brown finished 2-for-3 at the plate in the loss and Dayne Black (one hit) collected an RBI.

Mark Dyer pitched another gem for the Bulldogs against Cold Springs on Tuesday, holding the Eagles to just two hits and collecting 12 strikeouts in the 7-0 win. Ashton James led the way for Hanceville at the plate, going 2-for-3 with two RBIs and Alex Campbell (one hit) and Tate Brown each drove in a run as well.

This matchup between the Bulldogs and Broncos was knotted at 1 after the first inning but Hanceville plated five runs in the third and four in the fourth to pull away from Holly pond and win it 14-1.

Ephrium Milne got the start on the mound for the Bulldogs and tossed five innings, allowing one run on three hits and picking up 10 strikeouts while also racking up four RBIs at the plate. Isaac Holmes finished 3-for-3 at the plate in the win and Tate Brown (two hits) drove in three runs. Drew Campbell (one hit) and Mark Dyer (two hits) each collected two RBIs for Hanceville as well.

The Warriors found themselves down 6-0 after the top of the second and even though they responded with five runs in the bottom of the second, they couldn’t generate enough offense to keep up with the Wildcats.

Hunter Persall was 3-for-5 at the plate with three RBIs in the loss and Branson Smith (two hits) drove in three runs as well. Will Franklin and Rylan Jones each finished with a pair of hits for the Warriors.