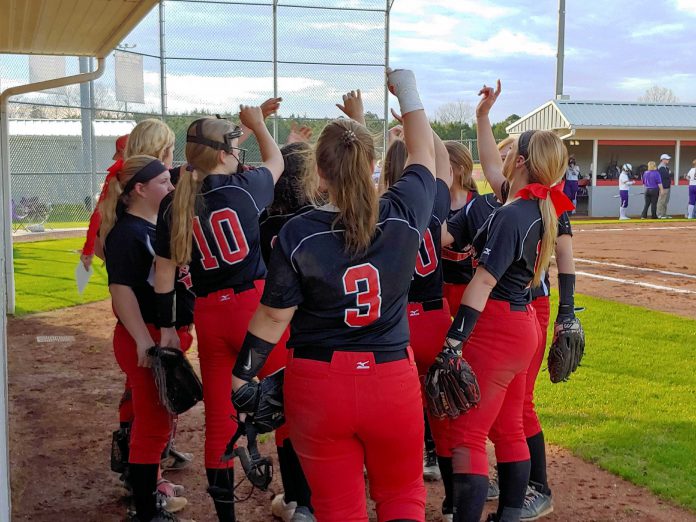 The Lady Raiders huddle up before taking the field during their 11-0 win over Fairview on Tuesday. (Sammy Confer for The Cullman Tribune)

GOOD HOPE, Ala. – Fairview traveled to Good Hope Tuesday afternoon for a matchup against the Lady Raiders and the home team wound up cruising to an 11-0 win.

Good Hope took advantage of a Fairview error to plate their first run of the game with a Bailey Swann RBI infield single. Sidnie English added a sacrifice fly and Swann later stole home to make it 3-0 after the opening frame.

Good Hope added to their lead in the bottom of the second on a Morgan Goodwin RBI bunt single and a Jacqueline Hays RBI infield single. Goodwin wound up scoring on a throwing error to make it 6-0. Angelina Flanagan hit a one-out single to left field and later scored on a passed ball to increase the Lady Raider lead to 7-0.

The Lady Aggies looked to get something going in the top of the fourth as a pair of singles got them going with two outs, but English got Devan Fulmer to fly out to left field to get out of the inning. The Lady Raiders put up four more runs in their half when Goodwin scored on a throwing error, Hays scored on a passed ball, English added a sacrifice fly and Flanagan hit an RBI single to make it 11-0. English worked around a triple from Kennedy Johnson to help preserve the 11-0 shutout victory after five innings.

Goodwin (scored three runs), Hays (scored two runs) and Flanigan (one run scored) each finished with a pair of hits and an RBI for Good Hope (10-3). Swann added a hit, an RBI and scored two runs while English chipped in with an RBI. English pitched a three-hit shutout and struck out four for The Lady Raiders and they will try to keep things rolling when they host Brewer on Wednesday.

Daisy Manasco, Rebekah Deblanc, and Johnson collected the only hits of the game for Fairview (1-6). The Lady Aggies will look to rebound from this loss as they will host Cold Springs on Thursday.

The Lady Broncos put up 15 runs in the first two innings to cut this one short and win easily over the visiting Vinemont Lady Eagles. Kalliann Perkins led the game with three RBIs after going 2-for-3 at the plate and Mattie Earl, Lexy Smith and Emili Perry each finished just behind her with two RBIs. Ciera James (two hits) and Kaylee Stallings (one hit) both drove in a run as well. Maddie Oliver recorded the only hit of the game for Vinemont.

Like they did in the first game, the Lady Broncos built a large, early lead after plating nine runs in the first two innings. However, the Lady Eagles would not be shut out this time and tacked on two runs in the third and three more in the fifth, but it wasn’t enough to overcome Holly Pond and Vinemont fell on the road 12-8.

Raleigh Olinger led the Lady Broncos at the plate, finishing 3-for-3 and Samantha Giles (one RBI) and Cidney Hays (two RBIs) finished just behind her with two hits each. Hailee Moore went 2-for-3 with two RBIs for the Lady Eagles and Emilie Hoffman collected two hits as well.

After being held scoreless for the first two innings, the Lady Warriors plated 13 runs in the third, fourth and fifth to put the Lady Knights away early. Carlie Wilkins finished 3-for-3 at the plate with three RBIs and Molly Pendley finished with three RBIs as well after hitting a 3-run bomb in the fifth inning. Makayla Brown (two RBIs), Gracie Abbot (two RBIs), Bethany Minck (one RBI) and Braelee Quinn (one RBI) each collected two hits in the win.

The Lady Bearcats jumped out to a 7-0 lead early in this one and the Lady Yellow Jackets made a late push to tie the game but couldn’t chip away at the lead and Cullman held on to win it 9-7. Brandy Peoples racked up a game-high six RBIs in the win thanks in large part to a grand slam in the second inning. Savannah Davis, Alex Stansell (one RBI) and Carlie Burnham (one RBI) each collected a pair of hits for the Lady Bearcats.

After falling behind 4-0 in the third inning, the Lady Tigers began to chip away at the lead in the the sixth but couldn’t quite overcome the lead and the Lady Blue Devils held on to win it 4-2. Abby Phillips put together a stellar performance at the plate, going 3-for-3 with two RBIs in the loss.

The Warriors built an early lead in the first two innings of this one to take control and tacked on five more runs in the fourth, fifth and sixth innings to run-rule the Hawks and head home with a 10-0 win. Blake Diestelow went all six innings on the hill for West Point and put together a no-hitter against Danville, collecting six strikeouts in the win. Eli Folds led the way at the plate, going 3-for-4 with and RBI and Hunter Persall and Whitt Laney finished just behind him with two hits and an RBI of their own.

The Lions put the Bearcats in a hole early after jumping out to a 4-0 advantage in the first two innings and Cullman was never able to chip away enough to overcome the lead and fell on the road 6-2. Brennen Norton (one RBI) and Cooper Beck both recorded two hits in the game for the Bearcats.