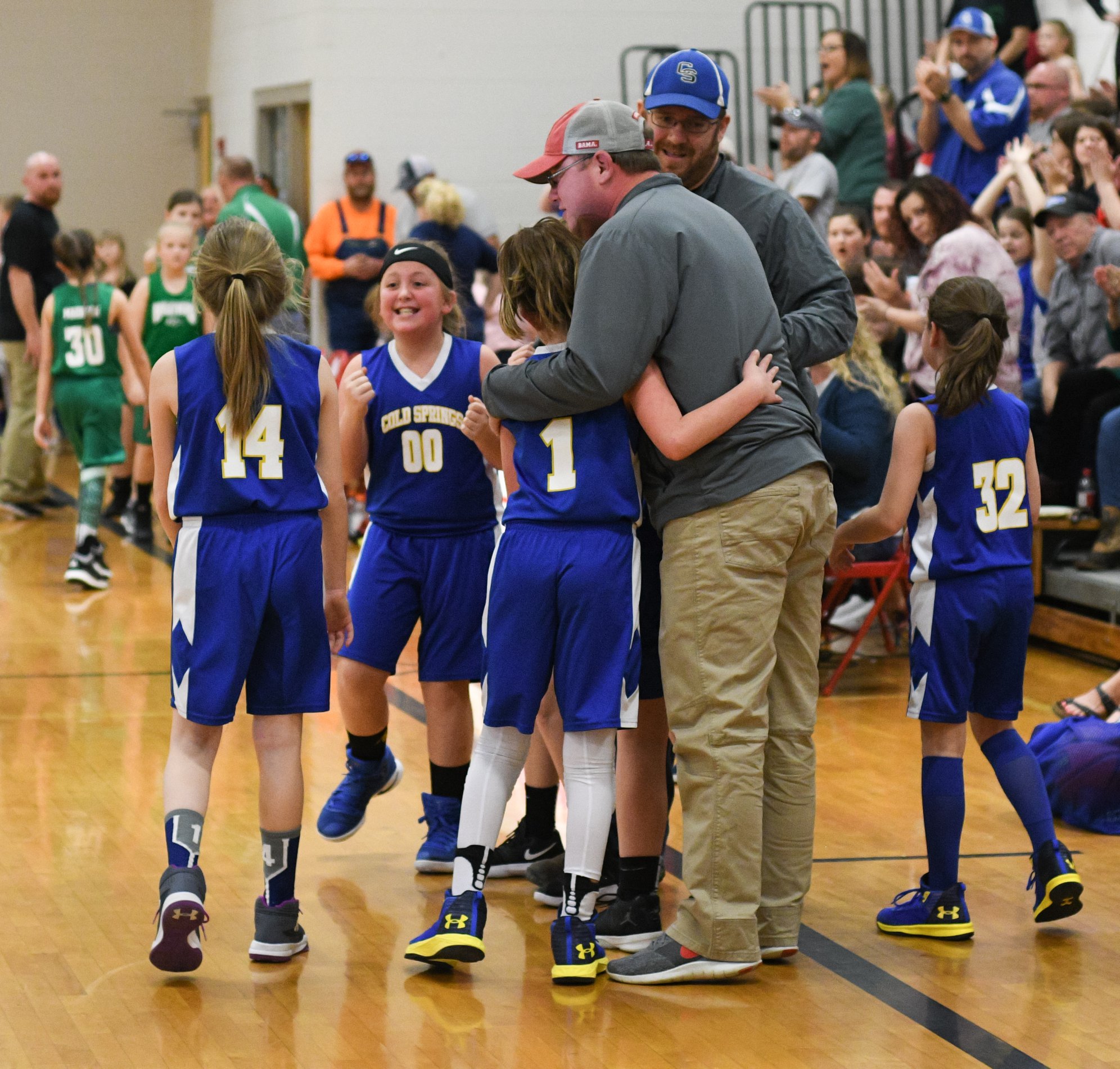 Action was fast-paced for the first period with a combined eight points scored in the first, but the defenses were able to take control the rest of the way. Cullman’s Emma Eastman got into the action early along with McKinley Varden who added two more points. West Point got into the scoring action with back-to-back buckets from Kara Parker and Jaylee Jones to tie the score at 4-4 going into the half.

The second half picked up with the same pace as the first, as both teams fought hard to score. Smothering defense by both teams made getting a shot off difficult. Cullman’s Dracen Bates added in a free throw to extend Cullman’s lead to 5-4.

That's when Jones for West Point picked up the pace and took the lead with a jumper to move the Lady Warriors ahead 6-5 late in the third. Jones added another basket to put West Point comfortably ahead, 8-5. Cullman drew within one point with less than a minute to play with an Eastman layup, but that wasn't enough for the Lady Bearcats. West Point held on to win this year’s third-grade girls' county championship, 8-7.

The Eagles were able to take a lead in the second quarter on a pair of free throws from Ayden Light, but a deep three from Good Hope’s Cohen Moore gave the Raiders a 5-7 advantage going into the halftime break.

The Eagles’ Eli Voce tied the game at seven early in the second half and Cooper Johnson knocked down a pair of free throws to put Cold Springs on top 10-8 early in the fourth quarter. Eli Drake scored inside to tie the game at 10, and a layup from Moore put Good Hope in front 12-10. Voce netted a free throw to cut the lead to one and added another basket to put the Eagles ahead 13-12 late in the fourth quarter. The Raiders weren’t able to tie the game back up and Cold Springs claimed this year’s third-grade boys' county championship.

The Lady Broncos’ Lila Sellers hit a shot to pull ahead 6-4, and Butts continued the scoring later with another stop and pop to extend the lead to 8-4. Bruer cut into the lead with a breakaway layup, pulling the Lady Eagles within a basket. Cold Springs wouldn’t be deterred as they sank a basket to end the half tied at 10-all.

Holly Pond’s Sellers stopped and popped to take the lead on the first possession of the second half, 12-10. Bruer brought the Lady Eagles to within a point after splitting a pair of free throws and followed that with a hard rebound and basket that put the Lady Eagles up 13-12. Emmylou Early hit a shot in the lane to extend the Cold Springs lead to 15-12 with 2:45 left in game.

A rebound and put back from Olivia Parker extended the Cold Springs lead to 17-12 with just over a minute left in the game and Parker dropped in another easy layup to extend lead to 19-12 with 22 seconds left in the game. The Lady Eagles won it 19-13 to take home this year’s fourth-grade girls’ county championship.

The Aggies were able to take an early 5-1 lead in the first quarter and led things 7-1 by the start of the second. The run continued for Fairview as the Aggies stretched the lead to 9-1 on a layup from Camden Cullen early in the second quarter, but Parkside was finally able to get back on the board and made it a 9-3 game.

Levi Hunt scored to make it 11-3 Aggies, but the Panthers were able to trim it to 11-5 by the half. The offense really kicked in for Fairview in the second half after a 3-pointer from Conner Scott stretched the lead to 16-5. Scott added another shot from three-point range and laid one in on off a steal to give the Aggies a daunting 21-5 lead at the end of the third quarter.

Parkside was able to trim the lead to 21-8 early in the fourth, but the Fairview lead was too much for the Panthers to overcome and the Aggies held onto win it 27-13, capturing this year’s fourth-grade boys' county title.

Vinemont and Cold Springs squared off for the fifth-grade girls’ title and neither team could take more than a one-possession lead for the entire game. Caroline Miller scored for Vinemont late in the first quarter to tie the game at 4-4, and a 3-pointer from Reagan Robinson put the Lady Eagles up 7-4 early in the second.

A steal and bucket from Cold Springs’ Sadie Smith cut the Vinemont lead to 9-7 late in the second quarter and that lead held at the halftime break. Maddie Davis knocked down a shot to tie the game at 9-9 early in the third, and both teams traded baskets the rest of the way until Ella Dickerson got a shot to fall with less than a minute to play in the period to put Cold Springs up 15-14 at the start of the fourth quarter.

Robinson hit another shot around the 4:00 mark of the period to cut the Vinemont lead to 17-16 and later tied the game at 18 with a layup. Dickerson added a free throw later in the fourth to go up 19-18 and Alyssa Guess sealed the 21-18 win for Cold Springs with a layup late in the game.

The Warriors and the Eagles were the two finalists in the fifth-grade boys’ division and West Point was able to hold off Vinemont to claim this year’s county title.

The Eagles got off to a 3-0 start in this one, but the Warriors were able to come back and take an 8-7 lead late in the first quarter on a mid-range jumper from Jackson Shelton. Briar Taylor added another basket as the opening period expired to give West Point a 10-7 lead by the start of the second quarter.

A 3-pointer from Vinemont’s Cheston Wilhite tied the game at 10-10 early in the second and he added another trey midway through the period to put the Eagles ahead 15-14. The Warriors were able to answer late in the second and Shelton scored just before the half to put West Point on top 18-14 at the break.

Baskets from Shelton and Micnk stretched the lead to 32-23 at the start of the final period, but scores from Vinemont’s Colby Kilpatrick and Wilhite made it a 32-27 game. The Eagles weren’t able to get any closer after that, and West Point pulled away to win it 38-29, capturing this year’s fifth-grade boys' county championship.

This was a tight matchup for most of the first half, but the Lady Raiders were able to create some separation in the third quarter and pulled away to win it in the final period. Good Hope’s Cammi Graves knocked down a shot to take an early 4-2 lead, but Sacred Heart was able to take a 5-4 lead midway through the first on a basket from Makenzie Cruce.

The Lady Raiders retook the lead by the end of the opening period and Addyson Burgess made it a 9-5 game after knocking down a free throw early in the second. Ava McSwain scored later in the second to cut the lead to 9-8, but a put-back layup from Good Hope’s Mattie Wix gave the Lady Raiders a 12-8 advantage at the half.

Burgess scored to make it a 14-8 game early in the third, and baskets from Graves and Lexi Collins put Good Hope on top 18-8. Sacred Heart was able to cut the lead to 18-12 at one point, but the Lady Raiders still maintained a 22-13 lead at the start of the fourth.

McSwain scored midway through the fourth to cut the Good Hope lead to 24-17, but a basket from Chloe Eisher put the game out of reach at 26-17, and the Lady Raiders pulled away to win this year’s sixth-grade girls' county championship.

This one ended up coming down to just one possession, but the Aggies were able to take a big lead early in the opening period. Alex England and Rhett Boyd each scored to make it 4-0, and a 3-pointer from Gavin Pace made it 7-0. The Bulldogs were able to cut the lead to 7-4 by the end of the first quarter on two scores from Marquies Leeth.

Leeth cut the lead to 7-5 with a free throw, and Ashton Hurst tied the game at 7-7 shortly after that. Both teams traded buckets in the remainder of the quarter, tying the game at 9-9 going into the half.

Leeth scored eight unanswered points for Hanceville to erase the Fairview lead and tie the game at 19 midway through the fourth quarter. Carson Jones scored to end the Bulldog run and put the Aggies up 21-19, followed by another bucket from Boyd that stretched the lead to 23-19 late in the game. Hurst scored to trim the lead to 23-21, but a late score from Wood made it 25-21 and Hanceville couldn’t get back in front before time expired. Fairview held on to win it 25-22 and claim this year’s sixth-grade boys' county championship.