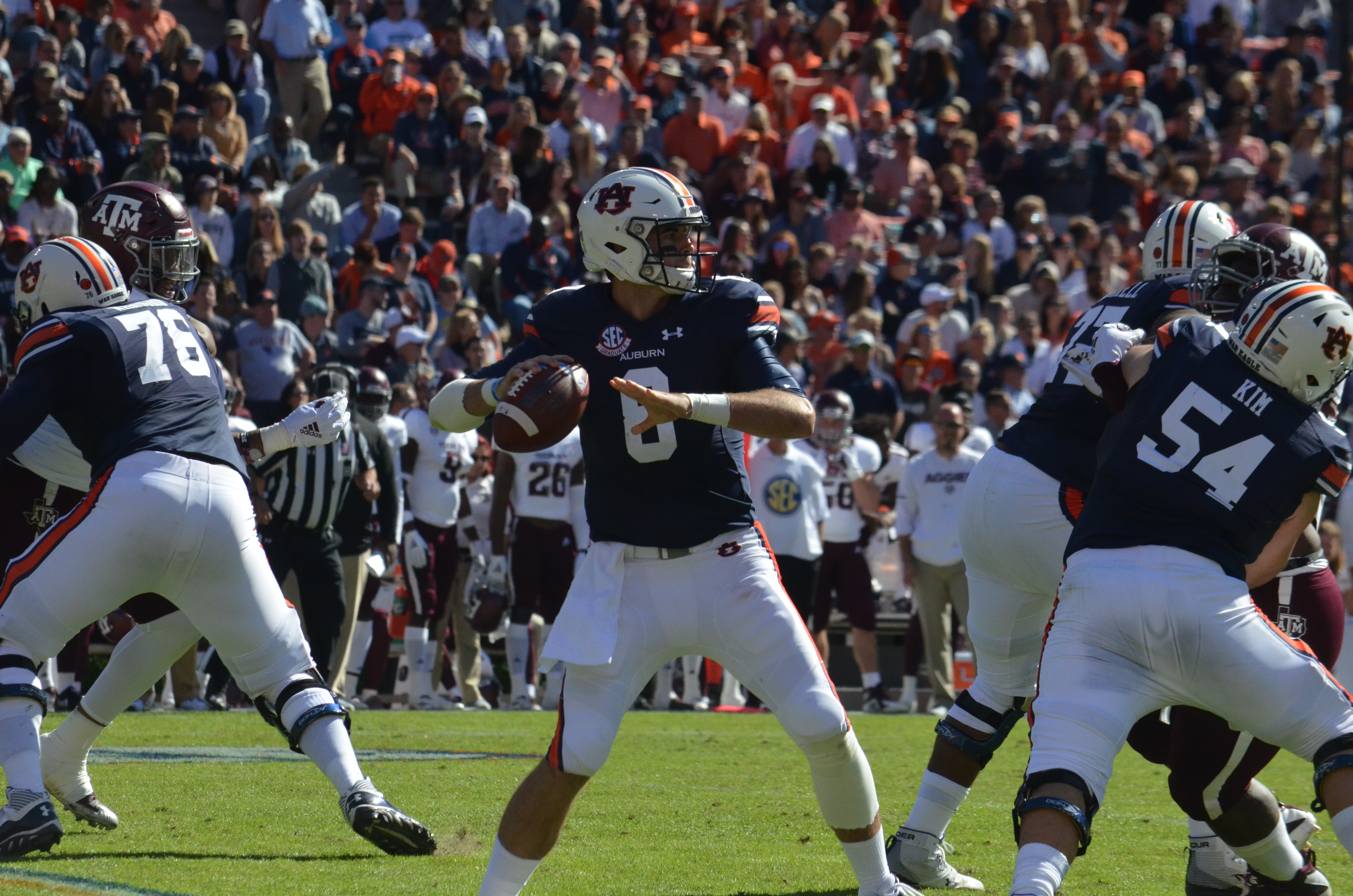 Auburn quarterback Jarrett Stidham completed 18 of his 29 passes for 239 yards and two touchdowns in the Tigers' comeback win against Texas A&M Saturday. (Nick Griffin for the Cullman Tribune)

AUBURN – It wasn’t always pretty, but the Tigers found a way to get by the visiting Texas A&M Aggies in Jordan-Hare Stadium Saturday morning. After struggling for more than three quarters, Auburn quarterback Jarrett Stidham put a ball on the back pylon of the end zone and freshman wideout Seth Williams made a spectacular catch to put the Tigers on top 28-24 with less than two minutes to play. Nick Coe sacked Aggies quarterback Kellen Mond on the final play to put away a dramatic 28-24 win for Auburn.

Auburn went backward on a lot of its offensive plays throughout the game, but down 24-14 in the fourth quarter, an interception by Tiger cornerback Noah Igbinoghene provided a spark on the sideline that led to two scores and a come-from-behind win in the SEC.

After Auburn started the game with a three-and-out, the Aggies went up 3-0 on their opening possession after a 13-play drive that took six minutes off the clock and ended with a 35-yard field goal from Seth Small. The Tigers were forced to punt on their next possession but recovered an Aggie fumble just three plays later, setting up the offense deep in A&M territory.

The Tigers struck quickly and creatively. On the first play of the drive, wide receiver Ryan Davis caught the ball behind the line of scrimmage and hit a wide-open Sal Cannella in the end zone for a 20-yard touchdown. The PAT made it 7-3 Auburn near the end of the first quarter.

The Aggies re-took the lead almost immediately when running back Trayveon Williams went 38 yards untouched for a score on the ensuing possession to go back on top 10-7. After Williams’ touchdown, the two teams exchanged punts for most of the second quarter until both added touchdowns just before the half. Stidham found Seth Williams in the corner of the end zone for six points with four minutes remaining in the quarter, but the Aggies were able to take back the momentum before halftime. A&M went 75-yards in six plays, capping off the drive with a 14-yard touchdown pass from Mond to Trayveon Williams with less than a minute to play in the second quarter. That score gave the Aggies the momentum and a 17-14 lead at the half.

The Aggies picked up where they left off in the second quarter and scored on their opening possession of the third quarter. Williams scored from 1-yard out to cap off an eight-play, 75-yard drive and put A&M up 24-14 early in the second half. The remainder of the third quarter and a lot of the fourth quarter was sloppy for both teams and neither would find the end zone again until Chandler Cox punched in a 1-yard touchdown that cut the Aggies lead to 24-21 with just over five minutes remaining. Cox’s touchdown came after an Igbinoghene interception that set the Tigers up at their own 30-yard line.

The Auburn defense forced a punt from A&M on its next possession and gave the Tiger offense one more chance to make something happen. The offense stepped up to the plate as Stidham hit Davis over the middle and he weaved through Aggie defenders all the way down to the 11-yard line. The Tigers took the lead for good on a familiar play. Stidham hit Williams in the same corner of the same end zone he found him in earlier from 11-yards out again to put Auburn ahead 28-24 inside of two minutes left to play.

A&M got down the field far enough to get two shots at the end zone but an incompletion pass on the first attempt and a sack on the next one sealed the deal for the Tigers on their home field.

The Aggies had a balanced game offensively, piling up 201 yards on the ground and 220 through the air, but the Tigers were able to make just enough stops defensively to give themselves an opportunity to win. On the other sideline, the Tigers were only able to post 19 yards rushing, by far the lowest total of the Malzahn era. Like the defense, Stidham, Williams and the offensive unit were able to make just enough plays to come back to beat the Aggies.

The games won’t get any easier for Auburn. The win at home improves the Tigers’ record to 6-3 this season with a big rivalry matchup in Athens, Georgia coming up next week.