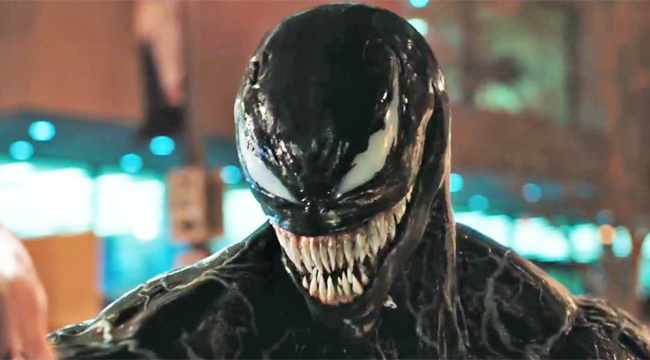 “Venom” is directed by Reuben Fleischer and stars Tom Hardy as Eddie Brock/Venom. This is the latest edition in the modern wave of comic book genre films, but unlike some of the ones that have come before it, “Venom” is seemingly two movies sharing one screen the same way our main character and the symbiote creature are sharing one body.

For those who aren’t familiar with this character already, Venom is one of the most famous recurring Spider-Man villains. As he grew in popularity he shifted into more of an anti-hero role and has been known to fight alongside Spider-Man from time to time. The challenge for this film is that Spider-Man is currently wrapped up in the Marvel Cinematic Universe and isn’t available for this Venom solo movie. Most of the interesting things about Venom come directly from his relationship to Spider-Man, so Fleischer had a tall task in front of him. Fortunately, we have Hardy in the lead role, which is always a good call.

Hardy brings an energy to the character of Venom that the rest of the film can’t match up to. As a result, everything involving Eddie and Venom, particularly their growing friendship, is very entertaining, while the plot, set up and other characters we have to follow feel like filler we have to get through until we can get our two main characters back on screen.

For those reasons, it’s hard to say whether or not this movie is actually good. If you enjoy Hardy’s oddball performance like I did, then at least half of this film will really entertain you. Hardy also provides the voice of Venom, and Hardy’s ability to act against himself is something to see. It’s funny, endearing and by the end of the film you’re really rooting for Eddie and Venom to get it done. If Hardy’s performance doesn’t work for you, as many others have said, you may really dislike this one.

Carlton Drake, played by Riz Ahmed, is one of the more bland, forgettable villains we’ve seen lately, and for the type of character they wanted in the film, Ahmed comes off as miscast. Ahmed is an actor who can bring a lot of humor, energy and charisma to a character, but in this film, Drake is so toned down it makes you wonder why they cast the part the way they did. Michelle Williams is also on-hand as Anne Weying, a love interest for Eddie. Like Ahmed, Williams has very little to do here and doesn’t make any real lasting impact on the plot. These two come off like they’re in a different movie than Hardy. Their scenes, particularly Drake’s, are a major tonal shift from the buddy comedy going on with Eddie and Venom.

Overall, I would say that if you’re looking for a version of Venom that is accurate to the source material, that’s not what you’re going to get. For me, that was a positive, but for hardcore fans of Venom in the comics that may not be the case. Everything involving Eddie and Venom is fun to watch, including the action. The final battle gets pretty CGI-heavy and a little tough to follow, but that can be said about any comic book film. Venom’s action is fast, intense and fun to watch so if you’re also on board with Hardy’s performance, you’ll have a good time.