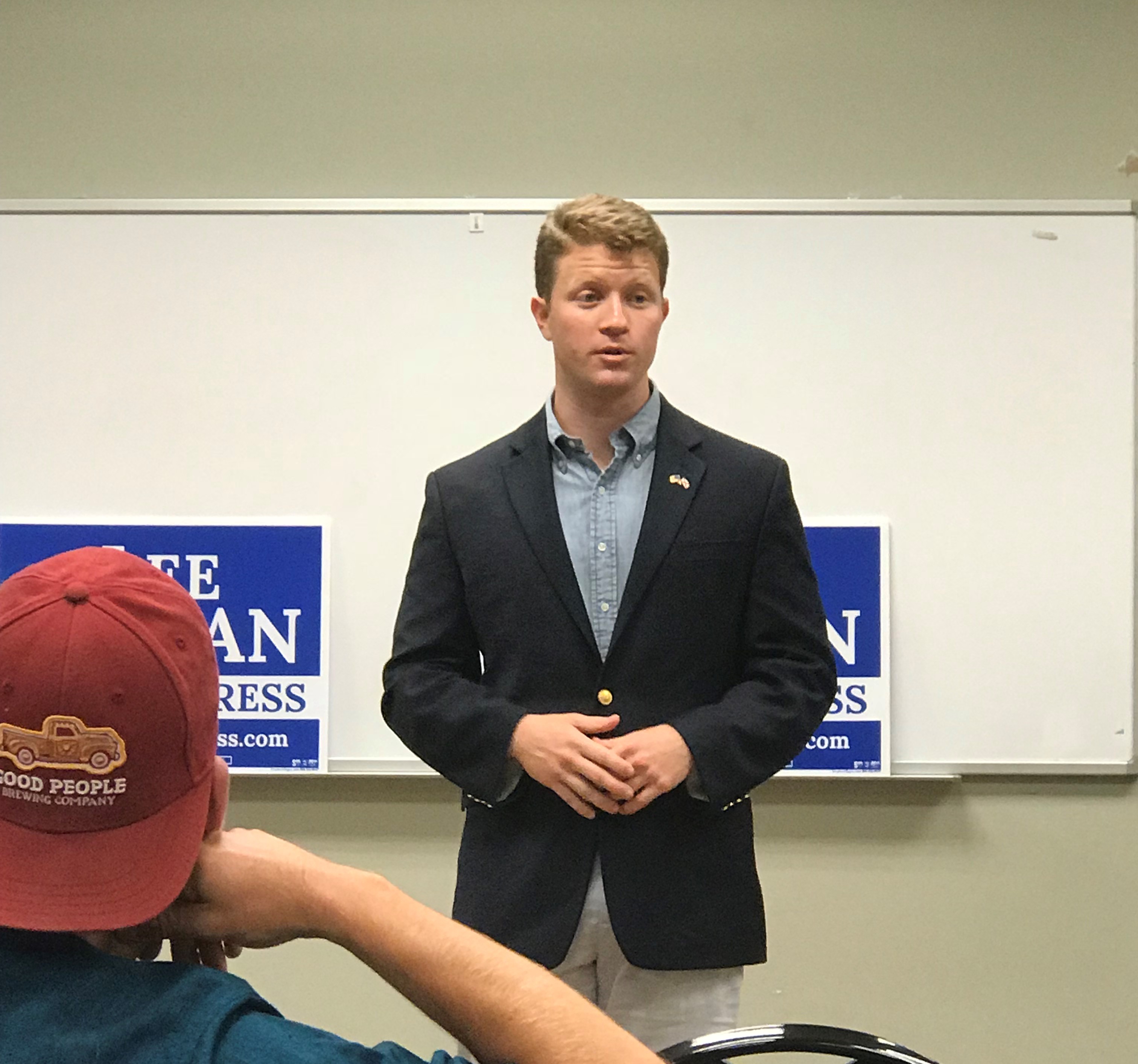 Auman is seeking to unseat 22-year Republican incumbent U.S. Rep. Robert Aderholt, who has run unopposed in the past three elections.

A native of Union Grove in Marshall County, Auman attended Snead State Community College and graduated from Auburn University. He joked with those in attendance about being an “AU-man.” While attending Auburn, he served as a youth minister and worked with individuals with special needs.

Auman said, “I’ve talked to voters across all political spectrums and all have concerns and are affected by the same bread and butter issues. I want my campaign to be evidence of how I will represent you in office.”

Before opening the meeting up for questions, he spoke about three areas of major concern: the opioid epidemic, the closing of rural hospitals and the slow economic recovery in many areas due to failing infrastructure.

Auman explained, “A study by Harvard University revealed that Alabama’s 4th Congressional District is the highest opioid prescribing district in the entire country. My opponent has not addressed this report, but he has received $135,000 from opioid manufacturers. When asked about the opioid problem, Aderholt implied that depression was one of the culprits of the epidemic. Opioids aren’t prescribed for depression. “

Auman hopes to introduce a bill requiring a national prescription database to help physicians better identify patients who have multiple prescriptions and those seeking out multiple doctors.

“If physicians are required to update the database in real time and check the database prior to writing a prescription, opioid abuse would decrease,” he said. “We need to have a national database that allows information sharing between the states.”

Auman also has ideas to reduce the high level of rural hospital closings. He supports ending the reductions in disproportionate hospital funds. He said that should have been done when the United States Supreme Court ruled a federal mandate to expand Medicaid unconstitutional and a state-level decision.

Investing in infrastructure is a way to build long-term employment opportunities throughout the district, according to Auman, who added, “Modernizing infrastructure will lead to immediate job creation and sustained economic growth. Our roads and bridges are in bad shape and I will fight for funding to fix these problems and create jobs.”

When asked about the minimum wage, Auman said, “There should be regional minimum wage based on the cost of living in that area. Adjustments should be made yearly. Studies show no evidence of negative effects on business when raising minimum wage.”

A local farmer asked Auman his views of recent tariffs imposed by President Donald Trump and bailouts paid to farmers hurt by them.

Auman replied, “The recent tariffs were a terrible idea. Tariffs can be fundamentally good, but they need to be well thought out and in coordination with other countries. Farmers don’t want welfare. They want to sell their goods and earn their living. Other countries are now finding other countries to do business with this will have a long-term effect.”

About protecting kids from gun violence at school, Auman said, “Everyone agrees that our kids should not fear for their lives at school. We can make changes and not infringe on Second Amendment rights.”

“My positions on gun safety are based on evidence, not ideology,” Auman said. His website, www.aumanforcongress.com, details his recommendations for reducing gun violence including closing loopholes for background checks and closing the “boyfriend loophole” by prohibiting convicted stalkers and abusers from owning guns.

Auman closed the town hall saying, “People are ready for a change. Let’s make it happen.”

The general election is on Tuesday, Nov. 6.