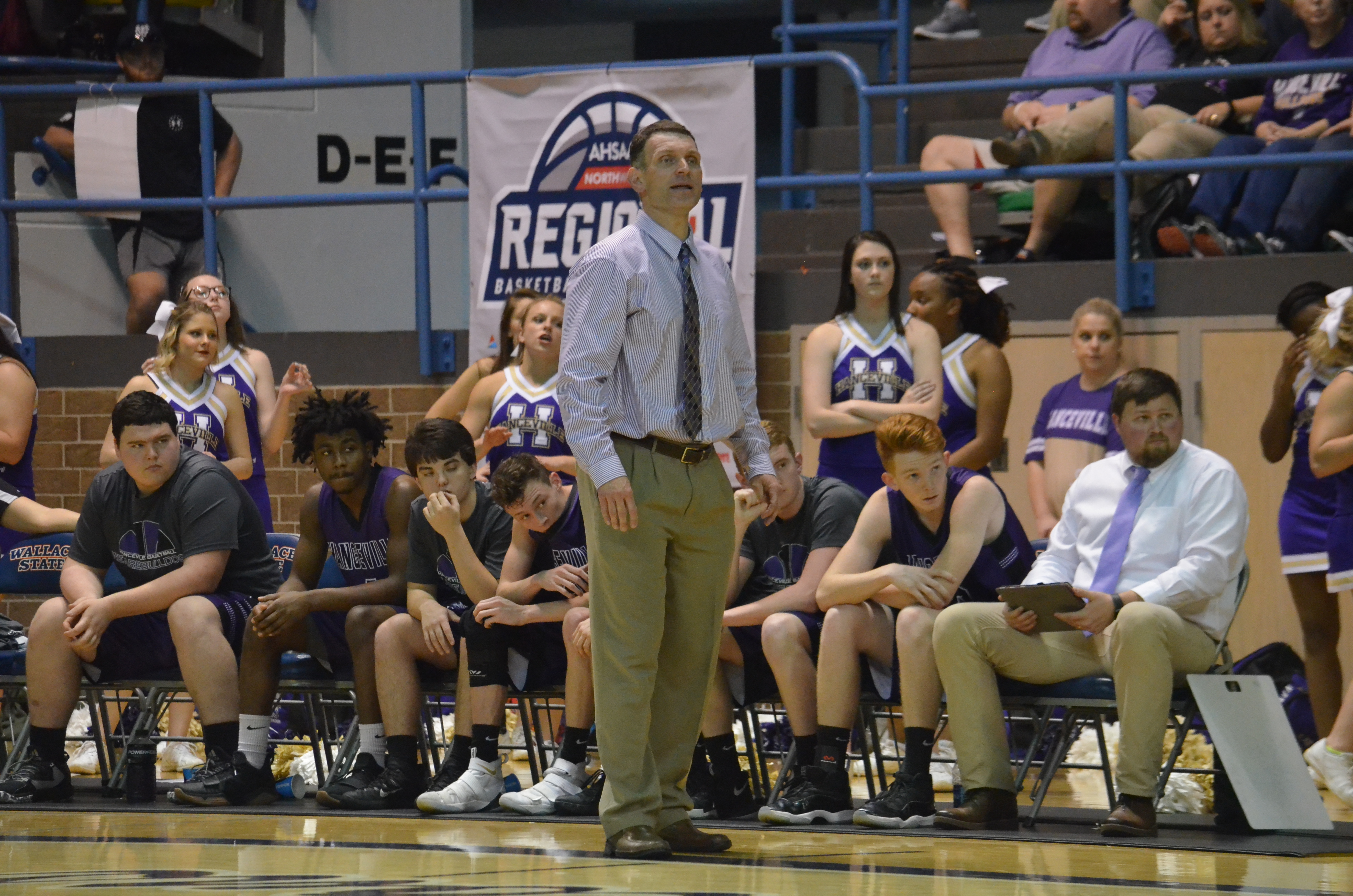 Coach Daniel Wakefield looks on during Hanceville's game against Lauderdale County in the Northwest Regional on Feb. 21, 2018. (Nick Griffin for The Tribune)

HANCEVILLE – After 13 seasons, Hanceville High School basketball coach Daniel Wakefield is stepping down. Wakefield will be the new principal at Hanceville Middle School.

Wakefield, who helped take the Bulldogs to an Elite 8 appearance last season, said he’s going to miss leading them on the hardwood, but for him, this was an opportunity he couldn’t pass up.

“There’s never going to be a really good time to step away from basketball because I enjoy it so much and I enjoy being around the guys and being around the game, but when opportunity knocks like this, you know, my long-term goal was to be in a leadership position as a principal and especially considering I was able to stay here in Hanceville, it was really a no-brainer,” Wakefield said. “A lot of people felt like it was a really difficult decision and as much as I love basketball, as much as I love coaching here, getting the opportunity to be a principal wasn’t that difficult of a decision. I’d like to coach the next 20, 30 or 40 years. I could probably coach forever, but if you want to have this position that I have now you have to make a choice and I’m glad to be here right now.”

Wakefield touched on some of the things he loved the most about his time in basketball, particularly all the players who helped build the program during his tenure.

“The thing I’ll miss the most is just the preparation. Scouting the opponent, going into practice and preparing and taking guys through drills and seeing them go through the process of getting better each day and at the end of the year having a chance to win a championship or go to the regionals,” he said. “Really just the preparation and process part of being involved in the game and obviously the excitement in the locker room with the guys jumping and smiling after a big win.”

He continued, “Obviously, I’ll miss that because that’s addictive to be a part of. I just want to thank all the guys that have played for me over the years and I hope they know how much I think of them and appreciate them for putting in hundreds of hours and working to help make our program very competitive and making it a winning program as well.”

Wakefield’s coaching presence will no doubt be missed at the high school, but he is excited to take on a new challenge in comfortable surroundings.

“I’m really looking forward to this position, mainly because I have a great staff,” Wakefield said. “I’m familiar with the staff, I feel like I have a good relationship with the community, I like the people here in Hanceville, I get along well with people here so really just staying in this community and having a leadership role here is what I’m most excited about. I’m thrilled to be here, and I think we’re going to take a school that is already successful and hopefully make it even better.”