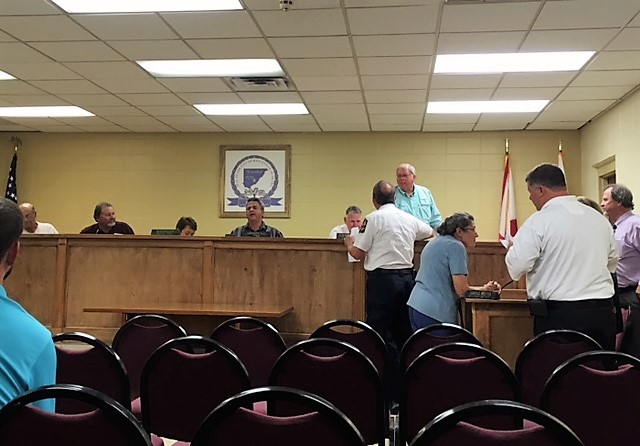 After opening with an invocation and the Pledge of Allegiance, the floor was opened to public comments.  A representative of the Hanceville Civitan Club rose to make the only address.  He thanked outgoing council members Doug Batemon and Greg Baker, who be replaced respectively by Sharon Porter and Justin Pruett, for their service the club and community.  He also gave a brief overview of plans for the upcoming community Christmas parade, which will take place Dec. 3.  Its theme will be "God, Country and Local Heroes," and will honor town officials.  Last year's problems with the directing of parade participants at the end of the parade have been addressed, so this year's event should go more smoothly.

Next the agenda was approved, and the council moved to new business.  A motion to pay all current city bills passed without discussion of any specific expenses.  Nail then presented information about an invoice from HMTC of Indianapolis, Indiana for a replacement axle for the city's backhoe, noting that he had personally gone to Indianapolis to get the axle when the seller indicated that it could not be shipped immediately.  A motion to pay the invoice passed.

Then discussion moved to a forklift the council has considered offering as surplus.  After reviewing prices on similar models in various conditions, the motion was made to surplus the forklift with a reserve of $7,500.

New business concluded with a request from Ms. Gloria Duffy (presented by Nail) for St. Boniface Church to be allowed to rent the Hanceville Civic Center for a discount price of $250.  The mayor noted that he and Duffy are related, and he therefore recused himself from the discussion and vote.  After Councilman Jimmy Sawyer warned that extension of discounts to one group could set a precedent for others, Councilman Charles Wilson stated that the rental policy currently in place should be followed.  No motion was made on the request, so no action was taken.

As the council moved to old business, Hanceville Police Chief Bob Long reminded the council about the upcoming Halloween trunk or treat event downtown, noting the event's size and the expectation of anywhere from 4,000 to 5,000 children.

Next, Fire Chief Rodger Green stated that the fire department hopes to use grant funds to purchase a Gator ATV and equip it for deep-woods rescue and firefighting and for water rescues.  He hopes the purchase can be made in the next month.  Green also sought assistance in getting word out about the current no-burn order.  He stated that the city is still dealing with residents, usually older and not active on social media, who have not heard about the order.

In reviewing the bank account balance sheet and FY 2016 actual vs. budget report, Nail mentioned no specifics, but reminded the council and other officials that revenue is always down this time of year and asked that all departments cut back on spending.

Wilson reported on drought issues, saying that the city well was at 79 feet, having recovered from a drop to 66 feet that occurred during recent pumping.  He also said that water is still available from Blountsville and other sources.

Councilwoman Kim Brown shared that a Veterans Day program will take place at 8:30 a.m. on Nov. 4 at Hanceville High School, with a reception for veterans to follow.

The council approved the minutes of last month's meeting, and business concluded with two announcements.  Wilson announced that community turkey shoots will begin next week, and will continue until Thanksgiving.  Nail said that the next organizational meeting will take place on Nov. 7 and will include new council pictures, a singing of the National Anthem by a yet-unnamed Wallace State musician and a bagpipe performance.