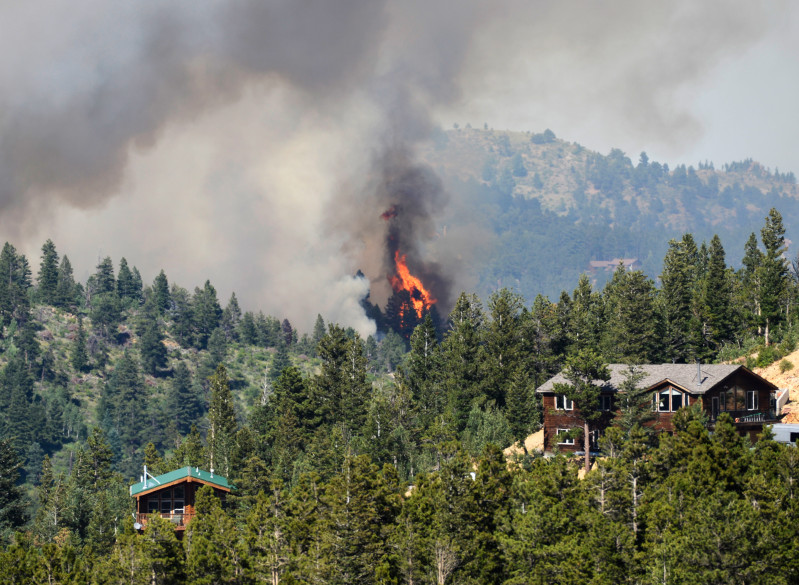 Arrests made in the Cold Springs Fire
Two campers from out-of-state have been arrested for arson.

Nederland, Colo. – Yesterday at 4:40 p.m., sheriff's detectives arrested two men at the Nederland High School evacuation site for their role in the start of the Cold Springs Fire. Jimmy Andrew Suggs, 28, and Zackary Ryan Kuykendall, 26, both of Vinemont, Alabama, have been charged with fourth-degree arson, a class four felony. The men face a felony arson charge because lives were endangered as a result of the fire.

Fire investigators and sheriff's detectives were able to determine the origin of the fire was an ad hoc campsite near the Peak-to-Peak Highway and Cold Springs Road. The two men, along with a female friend, were camping on private property and had established a campfire overnight Thursday into Friday morning. The men did not ensure that the fire was properly extinguished by dousing it with water, or making sure the ashes were cool to the touch before leaving the site. It is believed that the winds in the area, combined with the weather, allowed the fire to continue smoldering. The fire eventually spread from the ad hoc campsite, resulting in the Cold Springs Fire. The initial wildfire was reported through 9-1-1 on Saturday at 1:30 p.m.

Both men have been booked and lodged at the Boulder County Jail. Their female companion, Elizabeth Burdeshaw, 20, also from Vinemont, Alabama, is not facing charges, as she did not have any involvement in creating, maintaining or extinguishing the campfire.

For more specific information related to the current status of the #ColdSpringsFire, please refer to www.boulderoem.com/emergency-status. Updates are also being provided by social media through @BoulderOEM.

The case number associated with the Cold Springs Fire and arson arrests is 16-4041.

Nederland, Colo. – Below are the mugshots of the two men arrested for fourth-degree arson, a class four felony, in the Cold Springs Fire.  Both men have been booked into the Boulder County Jail where they remain pending bond.

The investigation of the Cold Springs Fire is ongoing, although additional arrests are not anticipated.

For additional information refer to the prior media release, which can be located at www.bouldersheriff.org under the 'News & Information' page. For current information on the status of the #ColdSpringsFire, please refer to www.boulderoem.com/emergency-status. Updates will continue to be provided by social media through @BoulderOEM.

The case number associated with the Cold Springs Fire and related arson arrests is 16-4041.

Find out more from The Denver Post at http://www.denverpost.com/2016/07/10/two-arrested-for-starting-cold-springs-fire-more-homes-threatened-as-fire-grows/.