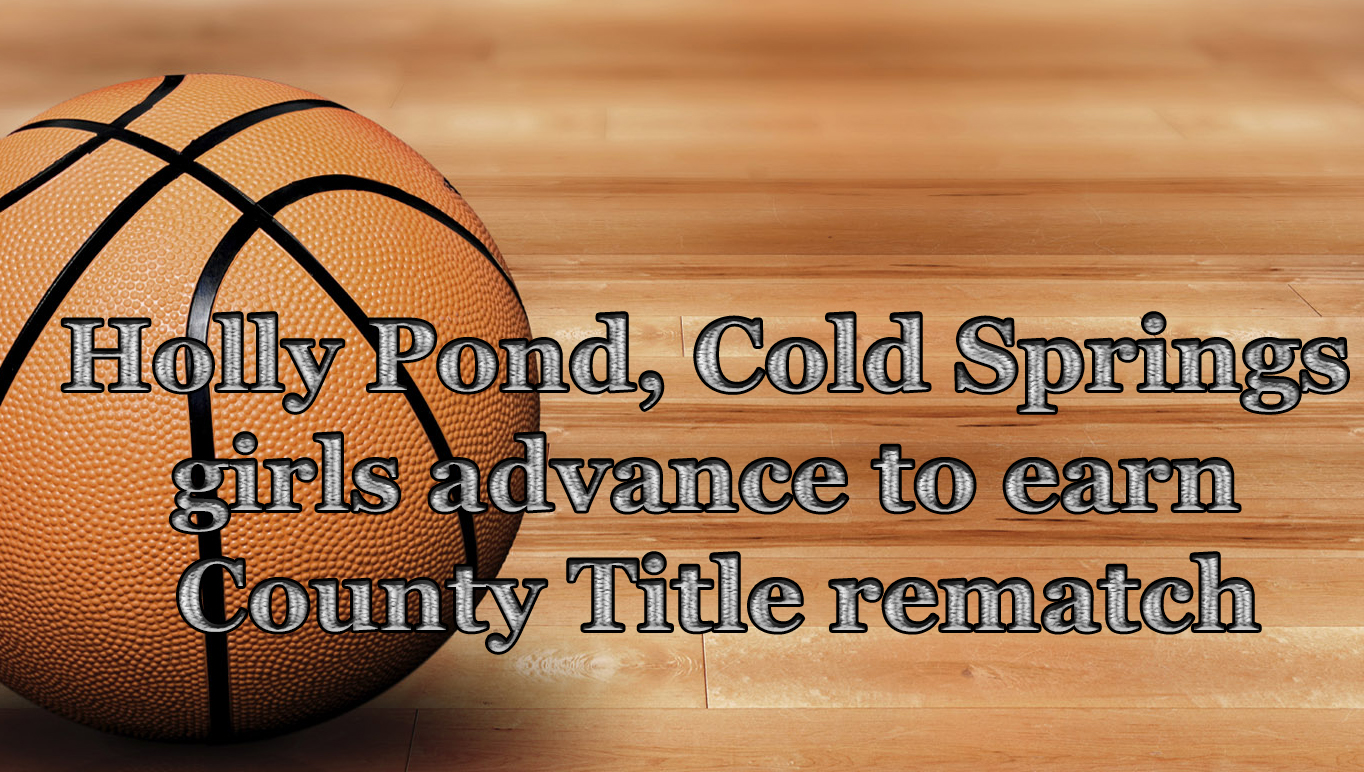 HANCEVILLE – For the third consecutive year, the Cullman County High School girls' basketball championship will be a battle between Holly Pond and Cold Springs.

That took form Thursday night in which both teams had to fight off slow starts and finish with a flurry to reach the title bout Saturday at 5:30 p.m. at Wallace State's Tom Drake Coliseum.

No. 1 Holly Pond was able to wipe out an eight-point deficit to 4th seed Good Hope early in the second period and come back to win by the score of 42-29.

Later that evening, No. 2 Cold Springs managed one point in the game's first 4:00 with No. 3 Fairview. Then the Lady Eagles got their offense going and wouldn't be denied in taking down the Lady Aggies 58-42.

Fairview's junior varsity girls grabbed a berth to the championship game by defeating Holly Pond 40-22 to begin the evening of entertaining basketball.

Good Hope got some shots to fall from the likes of Celeste Whisenant, Kaylee Maddox and Jamie Stinson early. They led the defending tournament champion Lady Broncos 11-9 after the first then started the second with a 6-0 run and a 17-9 advantage.

After that, it was Holly Pond. The Lady Broncos finished the quarter outscoring the Lady Raiders 13-4 and gained a 22-21 halftime lead when Ruth Horton drove to the basket and scored in the final seconds.

The Lady Broncos finished the game holding Good Hope in check, allowing the Lady Raiders three second half field goals in 12 attempts and just two points from the line.

Holly Pond outscored Good Hope 10-6 in the third to build a 32-27 lead and gave up just two points in the fourth in putting the game out of reach.

Stinson and Whisenant tallied 10 in the loss for the Lady Raiders, Maddox fired in seven, had nine rebounds and five blocks while Kate Kent scored two.

Seeing Fairview race to an 11-1 lead by the 4:00 mark caused Cold Springs coach Tammy West to burn a time out. Her team responded and finished the period with a 12-3 advantage and trailed after the opening frame, 14-13.

With Emme Willoughby and Keegan Johnson combining for six treys during the opening half, Cold Springs shot ahead and had a 31-25 advantage at the half.

The second half saw the No. 3 team in Class 2A go 12 for 12 from the line and add three more 3-point field goals, putting the game into breathing room with a 44-31 lead following the third.

Cold Springs, in the final 28:00, outscored Fairview 57-31 and turned a potential upset by the Lady Aggies into their 22nd win of the season and a quest to end Holly Pond's reign at controlling the county tournament.

Willoughby got 22 on the evening, shooting six for six from the line, plus scoring four from downtown. Bailey West was effective with nine of 10 free shots and a total of 16 points. Johnson added 13 on four treys, Caitlyn Hall had four points, 10 rebounds and five blocks and Camryn Crider scored two from the line.

Fairview won the fourth period by a margin of 13-1 to end Holly Pond's quest at an upset of the No. 1 seed. The Lady Broncos overcame a 10-3 first period deficit to tie the score at 17-17 before a free throw from Abby Schnittker sent the Lady Aggies to the locker room with an 18-17 advantage.

The Lady Aggies held Holly Pond to one of eight shooting in the second half for 12 percent and two of eight from the line for 25 percent.

Fairview plays at 2:30 p.m. in the title game Saturday vs. the winner of Friday's semifinal between Cold Springs and West Point.