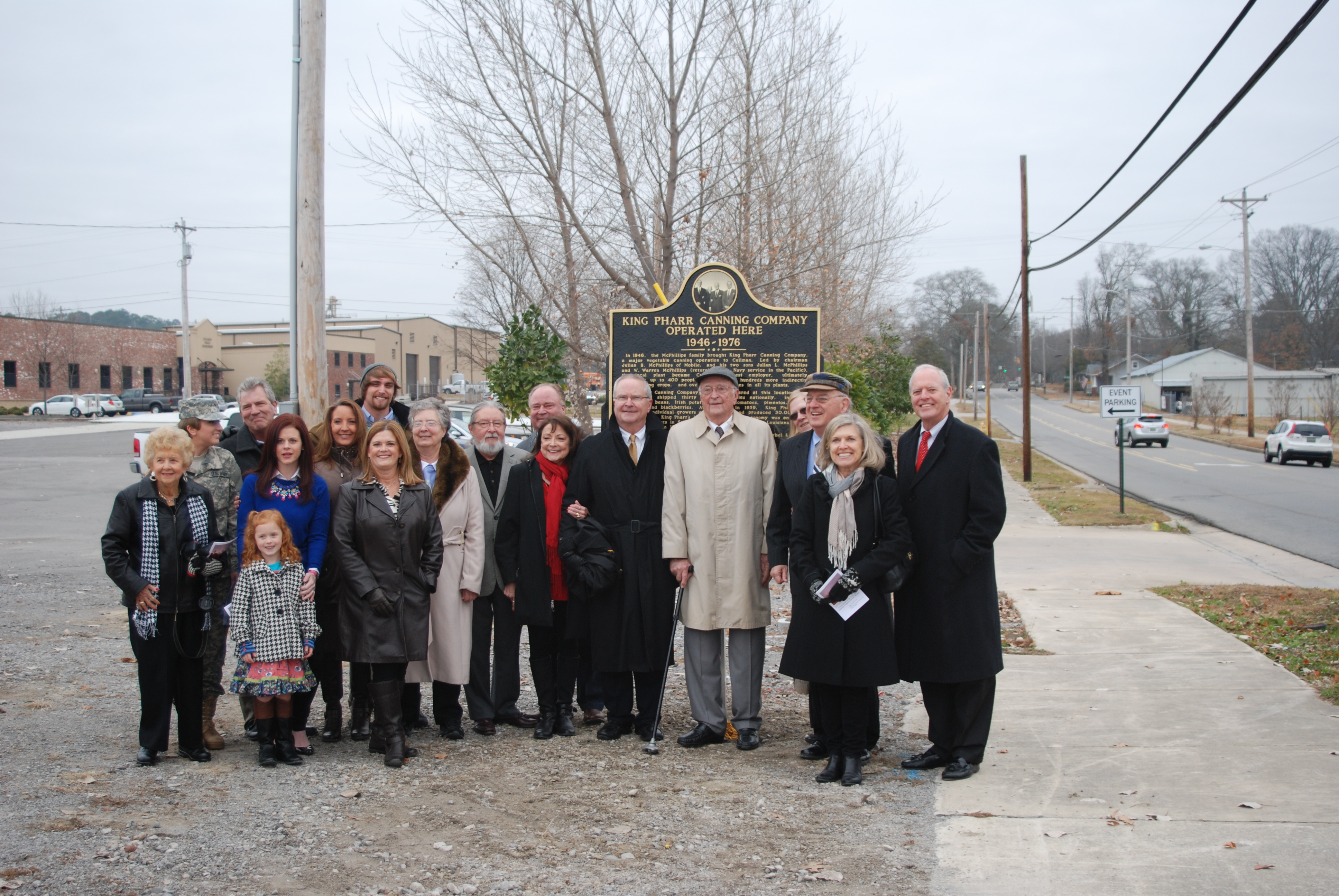 CULLMAN – On Friday, December 19, 2014, the City of Cullman received a brand new historic marker. Members of the McPhillips family came from near and far to celebrate, as well as fondly remember the King Pharr Canning Company, which was located on the property between Depot Park and the Cullman Police Station.

“We gather here together today to commemorate, with this historic marker, King Pharr Canning Company from 1946-1976,” said Julian L. McPhillips Jr. “We honor and thank the founders, namely my grandparents Julian and Lilybel McPhillips, and my father Julian L. McPhillips.”

According to Mr. McPhillips, the King Pharr Canning Company was purchased by the McPhillips family in 1946. It was a major vegetable canning operation here in Cullman. Led by chairman Julian B. McPhillips and W. Warren McPhillips, the local plant became Cullman’s biggest employer, ultimately employing up to over 400 people locally, many hundreds more indirectly in harvesting crops and over 1,000 employees in all its plants.

At its peak in 1959, King Pharr had over 2,000 individual growers on contract and produced 30,000 cans annually. The company’s impact on the local economy was enormous! As mentioned earlier, King Pharr’s headquarters were in Cullman, but they also had plants located in Selma, Uniontown, Georgia and Louisiana. The business closed its doors in 1976 due to the expanding fast food industry, leaving behind nothing but fond memories.

“We rejoice that this vegetable canning plant, which operated at this site for 30 years, helped to feed not only a nation full of vegetable eaters, it also fed the families of the many employees of Cullman and the farmers in the surrounding countryside,” McPhillips said with a warm smile. “We hope that today’s ceremony of this historic marker will help to preserve some of Cullman’s history that otherwise might be forgotten by future generations.”

The historic marker was approved by Mayor Max Townson and the Cullman City Council earlier in the year. Mayor Townson plans to add a concrete platform around the marker and a light to highlight its beauty in the near future. Townon was at the ceremony and fondly recalled his memories of the plant from his childhood.

Cullman is lucky to have such a rich history, and folks who truly enjoy making that history known. Many thanks to Mayor Townson and the McPhillips family for helping to keep the memory of the King Pharr Canning Company alive for generations to come. Again, the marker is located on the site of the former King Pharr Canning Company Plant between Depot Park and the Cullman Police Department.