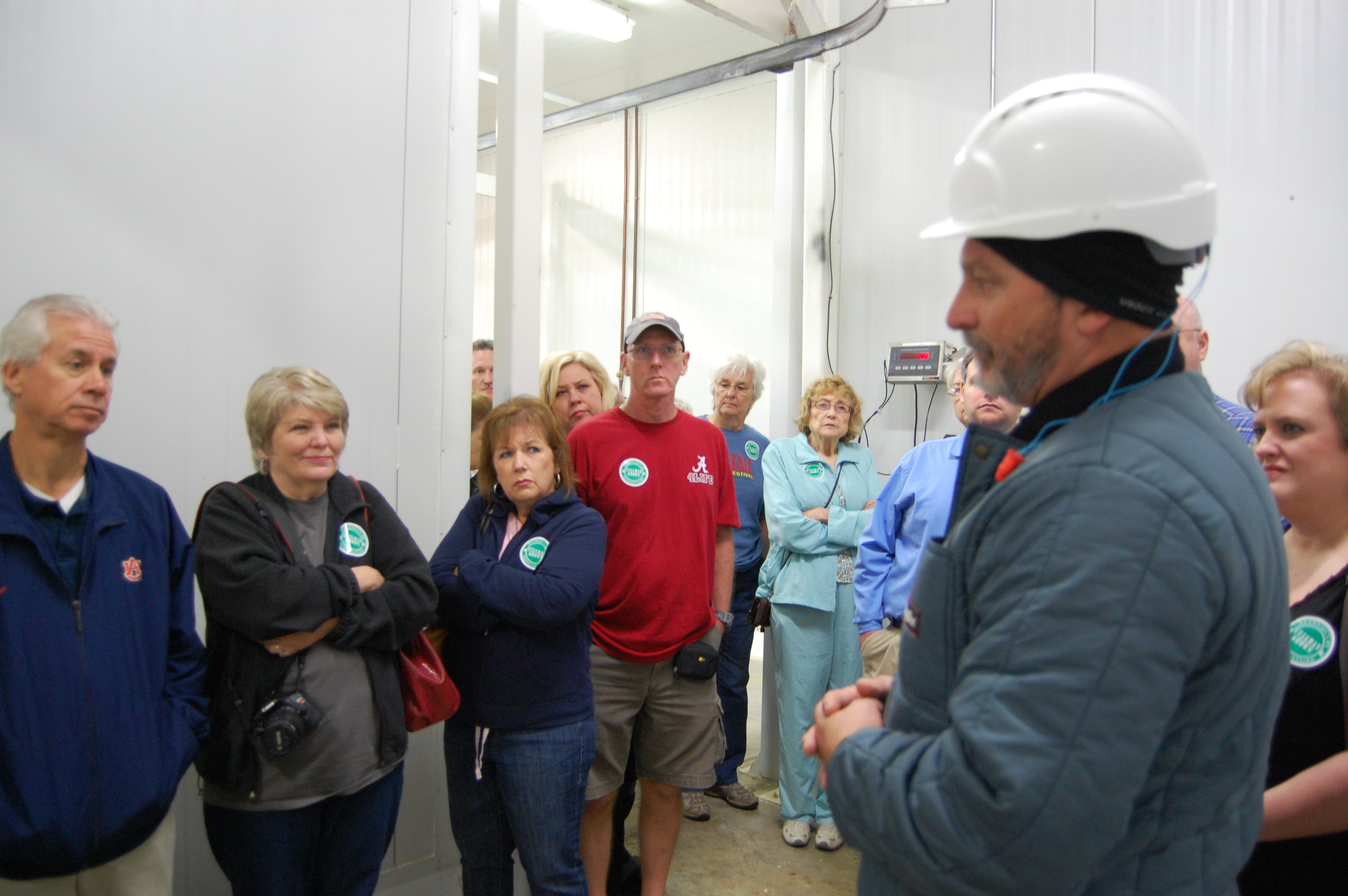 EVA – Recently, folks from all parts of Cullman County loaded a bus and traveled to the Fatback Pig Project Processing Plant. The trip was part of the 2014 Pasture to Plate Tour, which celebrates Cullman’s rich agricultural heritage.

Fatback Pig Project Processing Plant, located in Eva, plans to reintroduce the pork industry back to North Alabama. They support the regional production of heritage pig breeds and the ranchers who raise them humanely. In doing this, they plan to increase access and provide pasture-raised, high quality, heritage breed pork to high-end restaurants. This is done by working closely with local producers who make the availability of heritage breed pork possible.

“Our company killed its first pig in January of 2013,” explained Raymond Kimbrel, plant manager. “We’re a relatively new company, a small company with only 13 employees. We slaughter one day a week, usually on Fridays, then process the meat throughout the rest of the week. We have several varieties of bacon, bologna and Cajun spiced sausages.”

“We realized really fast that we cannot compete against Premium Pride or Carolina Pride where they go through a thousand pigs a day so we went for the niche market,” smiled Kimbrel. “We tried to find something a little bit different.”

The pork that is processed through the plant is a little higher cost due to the many protocols that are implemented. Their meat is used in many higher end restaurants and stores such as Jim ‘N Nick’s BBQ, Whole Foods stores and Inland Seafood restaurants.

“Times are changing. A lot more people are interested in where their meat comes from, what it’s been fed and how it was treated. That is a growing trend and we are trying to perpetuate, for lack of a better word. Like everybody else, it’s a challenge. People have budgets and food is part of that budget. Our pork is very expensive. I’ve wanted to eat my own pork here but I can’t afford it,” he chuckled.

One of the long-term goals for Fatback Pig Project is to provide their customers with an affordable product, which was raised by local farmers who practice responsible animal husbandry according to their strict protocol. They also plan to provide those farmers with a guaranteed rate of pay.

If you or someone you know would like more information about Fatback Pig Project they can go visit the processing plant in person. They are located at 130 Daniels Chapel Road, Eva, AL 35621. You may contact  Mr. Kimbrel at raymond@fatbackpig.com. Feel free to go online and read all about them on their webpage at www.fatbackpig.com.