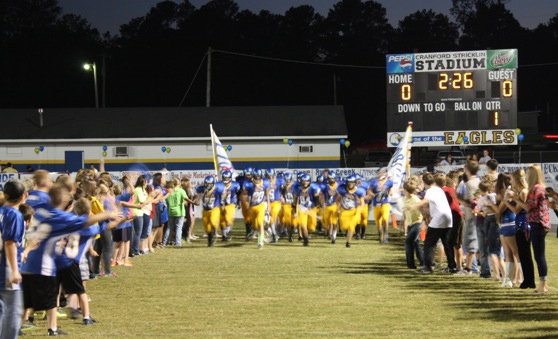 COLD SPRINGS – Six victories by the Cold Springs Eagles last year were as many as they had combined from 2006 to 2008. Winning has not been something that has been a part of the Eagles' program. A 6-4 record last season was the first time in nine years that Cold Springs enjoyed a majority of Friday night encounters.

Now the Eagles are hungry, hoping the momentum they built from last year continues. With half of the starters returning on offense and defense and half of the squad having game time experience, the Eagles are out to have consecutive winning campaigns for the first time since 2003 & 2004.

That happened under Rod Elliott. Elliott left the sidelines after 2005 and stayed away from the game until he was asked to run the program back in 2012.

From consecutive 0-10 seasons, the Eagles have gained a competitive edge in Elliott's second term, winning nine of 20 and coming within a game of making the 2A state playoffs.

Now the Eagles are working hard to keep it fun in the Southwest part of Cullman County. Cold Springs is optimistic about 2014. They will have to move on without running back Logan Campbell.

Campbell ripped through the opposition for over 1,800 yards and 22 touchdowns. He was a main part of the offense that scored a school record 369 points, ending the season on a tremendous outburst in a 60-7 rout at Carbon Hill.

The Eagles will continue to display the running game even without Campbell. Running the show this season will be sophomore Cayde Elliott, coach Elliott's second son.

Elliott has been working hard under the controls in the spring, during summer time and was Tuesday.

Coach Elliott had the Eagles in several 7 on 7 passing camps in July. If the Eagles have to go to the air, they feel comfortable in attacking with Elliott a left hander.

After consecutive seasons playing in Region 4 of Class 2A, Cold Springs was placed in Region 6 after reclassification in January.

The Eagles have a tough region schedule that features defending state champion Tanner and two teams from neighboring areas in Addison and Falkville.

Both of these teams reached the second round of 1A postseason last year and look to be contenders for the regional title along with Tanner.

Cold Springs is like several other programs that will start on the third Friday of August.

The Brilliant Tigers come to Cranford Stricklin Stadium for the first time ever on Aug. 22.

A week later, coach Elliott and his crew go into Danville, taking on a Hawks' team that just hired a new coach in Josh LouAllen from Austin.

The Region 6 opener is Sept. 5 at home with Southeastern playing the Eagles for the first time ever.

On Sept. 12, it will be a challenge for Elliott and his team in traveling to Tanner.

Sept. 19 the Eagles get Falkville on the home field and a week after that, Vinemont meets Cold Springs for the first time since 2001.

The first Friday in October (Oct. 3) will send the Eagles to Addison in an important game in the region. After a week off, the Eagles play at Sumiton Christian Oct. 17, host Tarrant Oct. 24 to close out the regional part of the schedule.

Elliott is 31-31 in six years coaching the Cold Springs program. He is tied with former coach Tommy Youngblood in having winning seasons in command of the Eagles, a total of three.

Good things came true last year. Now the Eagles want to show everyone they mean business when they buckle up the helmets and go to war on Friday nights.