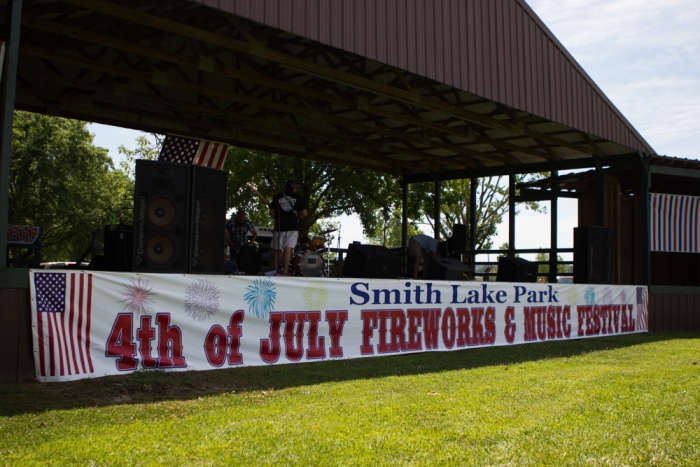 CULLMAN – Smith Lake Park celebrated Independence Day Friday with its exciting annual Fourth of July Festival. Admission was $5 per person, which included the festival, putt-putt golf and the pool.

This festival was packed with entertainment. Vendors were set up as far as the eye could see. Art work, games, henna tattoos, food and anything else you could think of were part of the celebration. From 1-5 p.m., a deejay took over the stage, followed by Coal Rain and Down South.

Five Bakers, a pizza food truck who was vending at the festival, is a family business owned by Trevor and Valetta Baker and their three children. This Vinemont family served up deliciously hot pizza, and when things got slow, Valetta played guitar in front of their set up.

“It’s been a good, steady day,” stated Trevor. “The weather is great and the festival is fun.”

The afternoon also included contests such as a golf cart decorating parade. A string of Smith Lake’s best golf carts paraded around the park, proudly displaying their reds, whites and blues.

An ice cream eating contest froze the brains of several contestants. The winner ate eight heaping bowls of ice cream in three minutes, with second place behind at seven bowls. A Pepsi chugging contest left some sick to the stomach, but the winner chugged eight cans of Pepsi in two quick minutes. Impressive.

The Smith Lake beach was packed with happy Americans swimming in the lake and listening to music. The summery smell of sunscreen filled the air and floats were scattered on the ground.

“Swimming is the best part!” said one happy participant with floaties on her arms.

Swimming was the best part, of course, until that night. People began swarming to Smith Lake Park around 7 p.m. to see the fireworks. Boats drove as close as they could, and everyone picked a spot to sit and watch.

The show began at 9 p.m. and was a magnificent display of colors and lights and noise and freedom.

The Smith Lake Park’s Fireworks and Music Festival on the Fourth of July was a success again this year. Everyone appeared to have a blast at this Independence Day celebration.