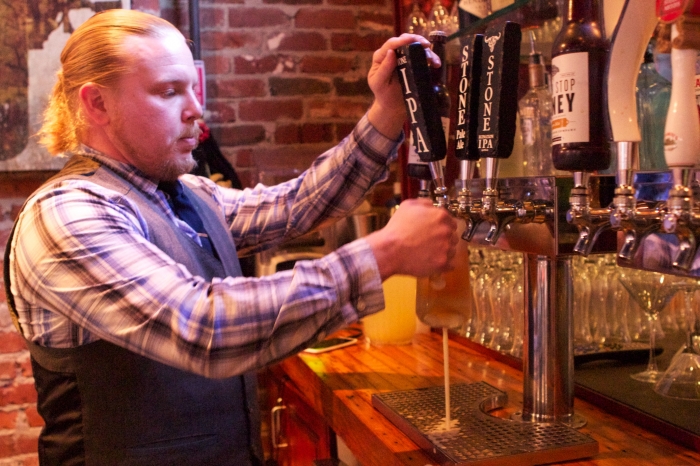 Craft beer is pouring into restaurants all over Cullman and with these beverages comes a delicious new hobby – reviewing beers. This can be a great way to bond with friends and family members or simply another way to disagree with them. It's also a great way to develop your taste for beer and to determine what kind of beers you like or dislike.

If you're new to the world of craft beer, I suggest starting out with a lighter beer such as a pilsner or an amber ale. The hoppy bitterness of an IPA or the bold flavor of a stout beer can be a shock to the tongue of a first-time beer drinker.

All beer falls under two general categories: ales and lagers. The main difference in these two types of beer is the type of yeast used to make them. Under the ale category falls several types of beer such as pale ales, brown ales, amber ales, IPAs, porters, stouts, wheat beers, some German specialty beers, and of course, Belgian Ales (the king of all beers.) Ales have a rich and hearty flavor.

Lagers, on the other hand, can include pilsners, bocks, dopplebocks, Oktoberfests and several other German style beers. Several of the most well known beers fall under the lager category. Maybe you've heard of Bud Light? They tend to have a less intense flavor than an ale.

So, you've picked out a beer and you're ready to review it. It's a good idea to use a beer-reviewing sheet because there is a lot to consider when reviewing a beer. There are several on the Internet to choose from.

The All Steak recently started serving Stone IPA. IPA stands for Indian Pale Ale and it is a strong, hoppy beer (just in case you were wondering.) I'm going to show you step-by-step how to review a beer, using Stone IPA as an example.

The first step is aroma. Beer can smell malty, hoppy, yeasty, and more. Don't start drinking your beer just yet. Smell your beer. That's nice, isn't it? Does your beer smell malty? If it does, mark it on your beer review sheet and explain it. Does it smell like bread or cookies? Maybe it smells more like grain, caramel, chocolate, or even coffee. These are all malty smells. There are no wrong answers.

Beer can also smell like tons of other things: fruit, bubble gum, smoke, butter, vegetables, or even cardboard. Write down what your beer smells like. To me, Stone IPA has a malty aroma, sort of like cookies or bread, as well as a light to moderate hoppy smell.

The second step is appearance. No, you still cannot taste your beer just yet. Be patient. Now, we have to look at our beer and observe its head, clarity, and color. The head on a beer is the foam at the top. Look at the head on your beer. How big is it? Is it rocky, creamy, or frothy? Maybe it's fizzy or maybe there is no head at all. Write that down. What color is the head? It will generally be white, off-white, or light brown. Now, look at the beer itself and pay attention to its clarity. It will either be somewhat clear or somewhat cloudy.

Wheat beers are usually cloudy, while ales and IPAs are usually clear. Make a note of your beer’s clarity on your beer review sheet. Finally, notice the color of your beer. This is exactly the moment kindergarten was preparing you for. Is your beer yellow or amber? Maybe your beer is orange, red, brown or even black? Unless you are color blind, this should be a fairly simple task.

Another important thing to consider about the head on your beer is lacing. But this can't be determined until after you've drank some of your beer and you haven't, right? Don’t worry, we are almost to this step. Stone IPA has a small, white head. It is clear, almost sparkles, and has a beautiful amber color.

The third step is flavor and finish. Here comes the fun part. Go ahead and taste your beer. That's good, isn't it? The two main things to note about the flavor of your beer are the initial flavor and the finish. The initial flavor could be sweet, acidic, bitter, or even sour. Write that down and explain it. If it's sweet, how sweet is it? Maybe it's both bitter and acidic. Once you have taken a few sips, stop. Please, don't chug good beer. Notice the after taste or the finish. This can also be sweet, acidic, bitter, or sour. The taste of beer can intensify or even change after lingering in your mouth for a few seconds.

Note the duration of the finish. Was it short, average, or long? Alright, it's time for lacing and longevity. Do you remember what the head on your beer is? Yep, it's the foam. Lacing is the foam that sticks to the side of the glass as you drink your beer. The more lacing, the better. Write how good the lacing on your glass is, from excellent to virtually none. Also, note the longevity of the lacing. Did it last until you finished your beer or was it mostly diminished? I thought Stone IPA's initial flavor was lightly sweet and moderately bitter. Its long lasting finish is very bitter.

The fourth and final step is judging your beer's palate. How does it feel in your mouth? Consider the body, carbonation and finish of your beer. The body of your beer is how thick it is. Judge this on a scale from water to syrup. Of course, beer will generally be closer to water than syrup. Next, consider the carbonation of your beer. Is it fizzy, lively, soft, or flat? Write it down. The finish, again, is the after taste. What taste lingers in your mouth after you finish your beer? Is it metallic or chalky? It could also be simply alcoholic or anything else you taste. For me, Stone IPA had a medium body, a lively carbonation, and a deliciously bitter finish.

So, there you go. You've finished reviewing your first beer. Spread this knowledge onto your friends or simply take delight in the fact that you now know more about beer than they do. Either way, please drink responsibly and remember – never review a beer while under the influence.