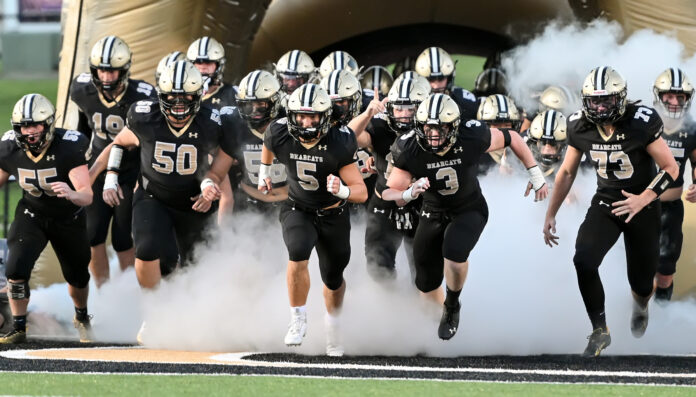 HUNTSVILLE, Ala. – Cullman hit the road Friday night for a non-regional matchup against the Generals of Lee Huntsville and the Bearcats took advantage of several turnovers and a great night on the ground to put together a 53-13 performance and return home with a win.

The Bearcats got things started with a 5-yard touchdown run by Evan Dye that made it a 6-0 game early in the first quarter and following a Sawyer Trimble interception, Ryan Skinner burst up the middle for a 25-yard score to stretch the lead to 13-0. Dye’s second touchdown run came at the start of the second quarter and gave Cullman a 20-0 advantage over the Generals. The ‘Cats extended their lead to 27-0 at one point when Skinner connected with Cooper Ogstad through the air for a 43-yard touchdown before Lee was able to get on the board midway through the second and make it a 27-7 game.

A 45-yard touchdown pass from the Generals trimmed the lead to 27-13 later in the second quarter but just before the halftime break, Skinner dumped a screen pass off to Tyler Owens and he ran took it into the end zone from 27 yards out to give Cullman a 34-13 lead going into the locker room.

The Bearcats added to their lead early in the third when Jackson Sessions picked off a Lee pass and ran it back 65 yards for a touchdown to make it a 40-13 game early in the second half. Skinner capped off Cullman’s next drive with an 8-yard touchdown run that stretched the lead to 47-13. The Generals muffed the ensuing kickoff and the Bearcats recovered. Just a couple plays later, Skinner scored from 8 yards out once again to put Cullman in front 53-13 late in the third quarter.

Following an interception by Tiger Flanigan on the next possession, the Bearcats got some younger faces into the game to finish off the win and Cullman left Milton Frank Stadium with an impressive, 53-13 win over the Lee Generals.

The ‘Cats improve to 3-2 with the victory and they’ll be back home next week to host the Blue Devils of Mortimer Jordan.