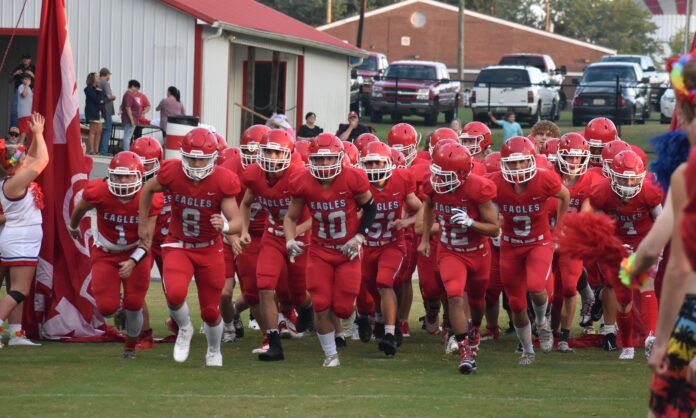 GUNTERSVILLE, Ala. – The Vinemont Eagles traveled to face off against the Lions of Brindlee Mountain in their region opener and returned home victorious with a 47-6 win.

Brindlee Mountain received the opening kick-off but four plays later Tai Shurtleff intercepted the ball and returned it to the 16-yard line which set up a 16-yard touchdown run by Toby Hill on the first play for the Eagles offense to give Vinemont a 7-0 lead with 10:15 left in the first quarter. The ensuing kick-off was fumbled and recovered by the Eagles, two plays later Hill found the endzone from 9 yards out to put the Eagles ahead 14-0 with 9:17 remaining in the opening quarter.

After Vinemont forced a punt, they went on a lengthy drive capped off with a 1-yard touchdown run by Ayden Thomason to make it 21-0 late in the first quarter. Vinemont forced a three and out and two plays later Thomason raced 35 yards to put the Eagles up 28-0 with 9:55 remaining until halftime. Once again, the Eagles defense forced a punt which led to a 15-yard touchdown run by Isaiah Pair to make it 34-0 with three minutes to play in the first half. Vinemont’s Kaien Earnest got an interception to give the ball back to the Eagles, which ran the remainder of the clock out sending it to the locker room.

Midway through the third quarter Isaiah Pair was able to add to the Eagles led with an 18-yard touchdown run putting the Eagles up 41-0.  Early in the fourth quarter the Lions scored on a lengthy pass to cut the led to 41-6. With 4:14 remaining in the game, Earnest scored from 3 yards out to wrap up a 47-6 win for Vinemont.

The Eagles will be back on the road next week for another big region matchup against Susan Moore.