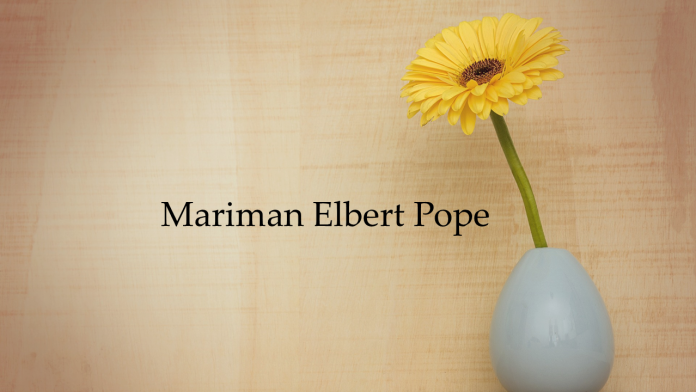 Mariman Elbert Pope, 86, of Cullman, Alabama, passed away at Cullman Regional Medical Center on June 12, 2021. Mariman was born in Clay County, Alabama on May 8, 1935, to Elva McKay and Ethelyne Smith Pope.

He graduated from Clay County high school in 1953 and received a degree from Alabama Polytechnic Institute (Auburn University) in 1957 while playing shortstop on the baseball team.

Mariman married his high school sweetheart, Bobbie Jean Waits, on July 1, 1956; the two were married 65 years. Following graduation, Mariman enlisted in the United States Army, serving as a clerk with the 31st Infantry as part of the 567th Medics Company in Korea. Mariman wrestled on a team in the Army and served as a ship barber, cutting hair to earn extra money. He returned home from deployment and was discharged in 1960.

Mariman and Bobbie moved to Cullman, Alabama, in 1961 with their two daughters, Denise and Juanita, to work as an Alabama State poultry inspector in pathology, serving the North Alabama region for over 30 years.

During that time, Mariman became more than a jack of all trades enjoying botany, bird watching, genealogy, taxidermy, and of course, Auburn football. Over a span of 50 years, it was a rare occasion that Mariman and Bobbie missed a home or away ball game for the Tigers.

Upon retirement from the state, Mariman’s taxidermy studio continued to serve the community, notably contracting work for legendary country singer, Hank Williams Jr., and the Cullman County Museum. Winning many state, national and international awards, Pope Taxidermy remained a fixture in the area until it closed its doors in 2015.

Arrangements are being handled by Cullman Heritage Funeral Home.