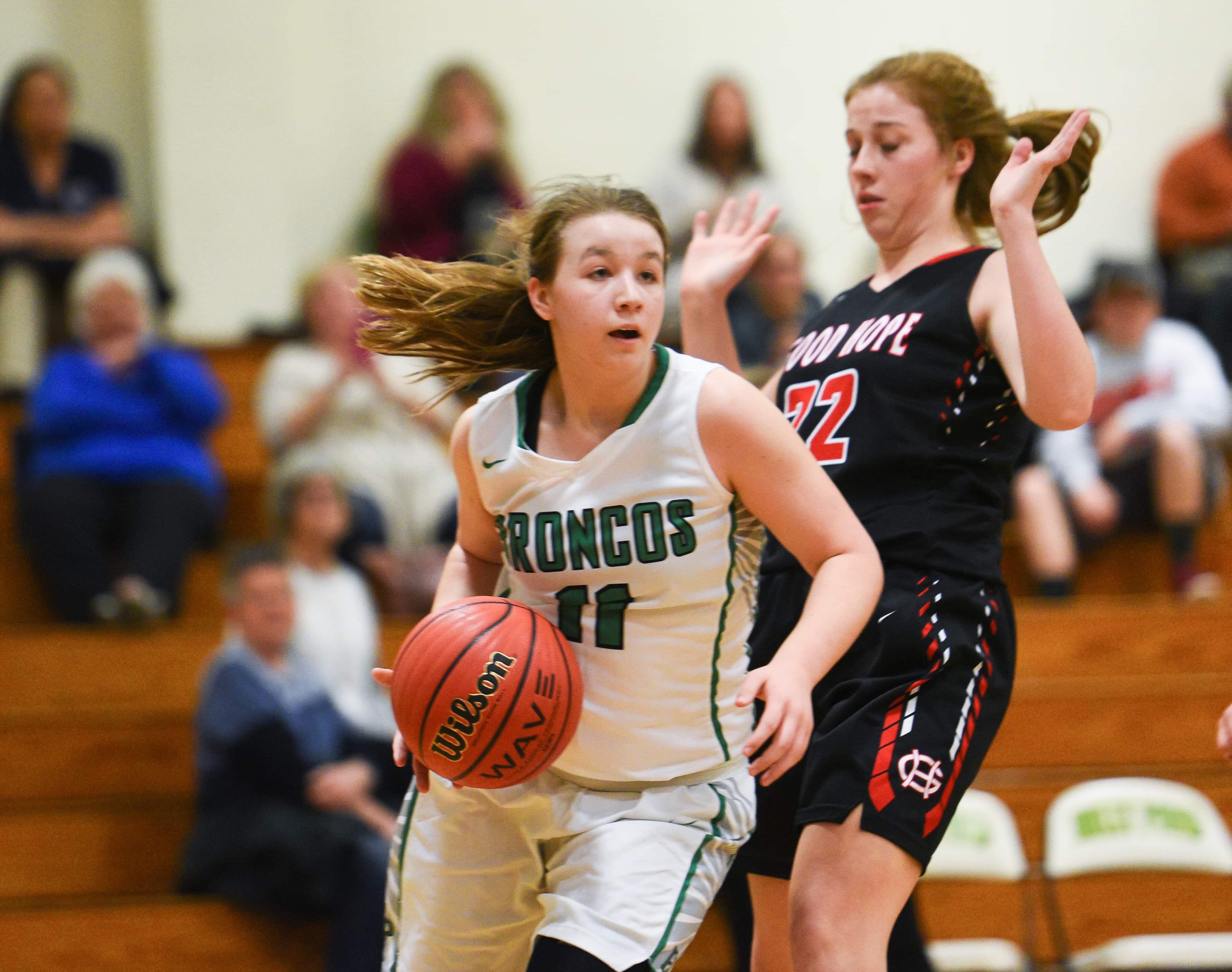 Maddi Ham led the Lady Broncos with 10 points in their 46-38 win over Good Hope Thursday night. (Martha Needham for the Cullman Tribune)

HOLLY POND – Good Hope traveled for a matchup with the Holly Pond Broncos Thursday night and the two teams split their varsity matchups. The Lady Broncos knocked off the Lady Raiders 46-38 while in the boys' game, Cole Maddox’s 32 points led the Raiders past Holly Pond.

Holly Pond had a huge first quarter, drilling four 3-point shots. Kara Hollis and Tate Duke each hit two, and the Holly Pond held Good Hope to just two free throws and two baskets as the Lady Broncos took a 14-7 lead into the second period. The Lady Raiders quickly made it a 14-12 game to start out the quarter, but Holly Pond stretched its lead out to seven at 19-12. After a Desiree' Odachowski trey made it a 19-16 game, the Lady Broncos answered right back by scoring the final six points of the quarter to take a 25-16 lead into the half.

A pair of Maddie Heatherly free throws made it 27-16 Lady Broncos early in the third quarter. Every time Good Hope started a run to get back in the game, Holly Pond had an answer for it and the Lady Broncos held a 37-27 lead after three and wound up winning the game, 46-38.

Maddi Ham led the way for Holly Pond with 10 points, five rebounds and a steal. Hollis added nine points, while Duke and Kristen Campbell each finished with eight.

The first half was very evenly contested between Good Hope and Holly Pond as the score was tied at 17 after one. The second period saw both teams going back and forth, but the Raiders broke a late tie on an Eli Phares trey and a pair of Cole Maddox free throws to take a 41-36 lead into the locker room. Maddox had a huge first half, scoring 21 points. Kyler Chaney and Isaac Ludwig led the way for Holly Pond with 14 and 12, respectively.

It continued into the third quarter as both teams looked for that one run to pull away, but it never happened, and the Raiders took a slim 56-55 lead going into the final period. Good Hope started the quarter on fire as the Raiders went on a 13-0 run to make it 69-55, but Holly Pond answered right back with six in a row to make it a 69-61 game. The Raiders, though, quickly pushed their lead back up to double-figures and didn't let the Broncos back in the game as they went on to win, 80-67.

The first half was very low-scoring, but Good Hope was able to hold an 8-7 lead after one. A pair of baskets by Quincey Marks gave the Lady Broncos a 12-11 lead, but the Lady Raiders' Kyndall Seal answered with back-to-back threes and they went into the locker room up 17-12.

Good Hope quickly stretched its lead to double-digits to start off the second half as Rechelle McLeod hit a layup. Seal and Emily Speegle later answered with back-to-back treys to make it a 25-12 score and took a 29-15 lead into the final period. Holly Pond couldn't climb out of the double-digit hole until the game was already decided and Good Hope wound up taking the game, 35-28.

Good Hope couldn't ask for a better start to the game as they jumped out to a 15-6 lead. They took a 16-8 lead going into the second period and the Raiders scored the first six points of the quarter to make it 22-8. They didn't let up as the halftime score was 32-15. Holly Pond couldn't get a rhythm going offensively and Good Hope was able to shut them down and take advantage of some Bronco turnovers to pull away with a double-digit victory, 55-38.