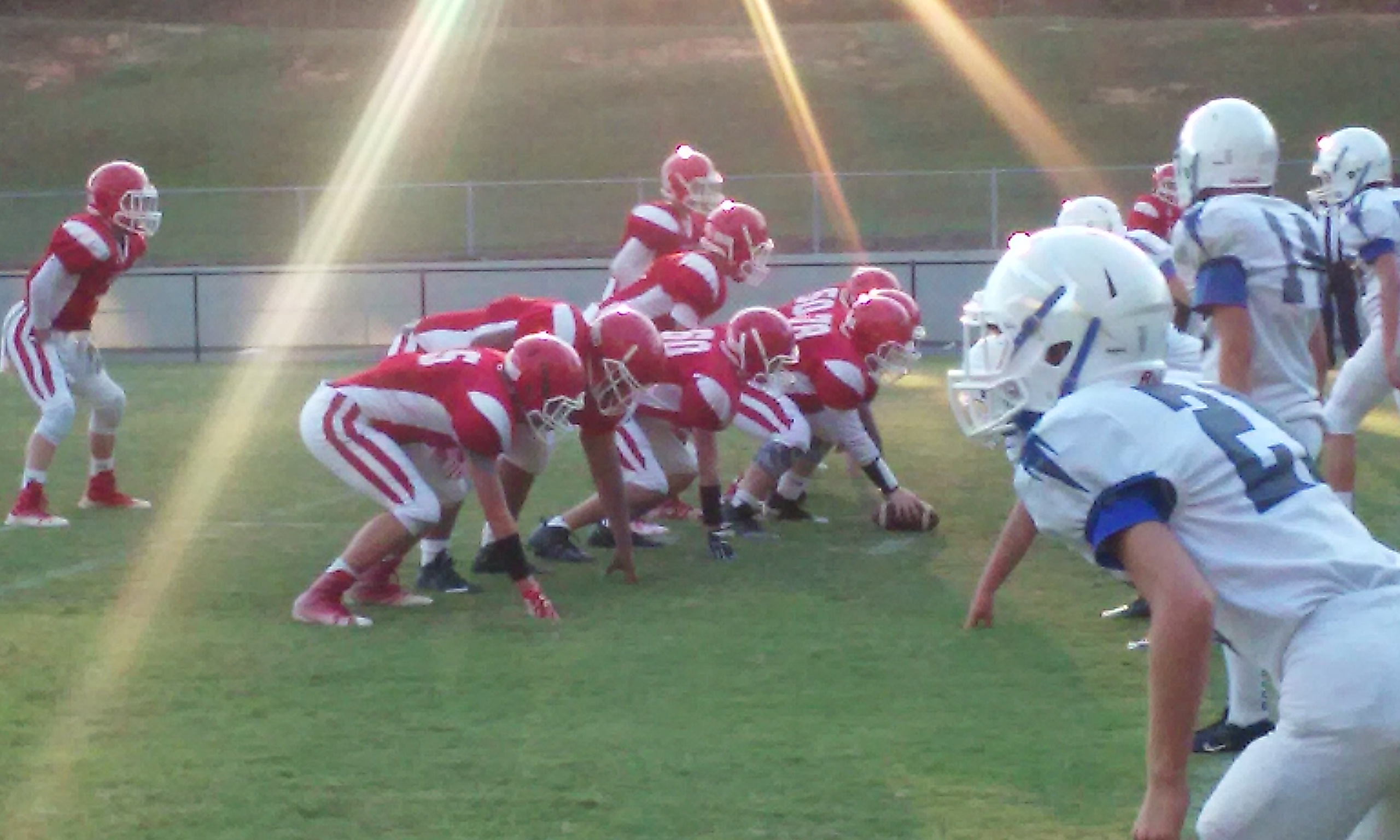 Monday-night football in Vinemont (Sammy Confer for The Cullman Tribune)

The Eagles didn’t waste any time finding the end zone on their opening possession as Isaac Moody started with a 52-yard run and Ayden Thomason finished the drive off with a 5-yard score to give the Eagles an early 8-0 lead with 6:07 remaining in the opening quarter. Thomason threw an interception later in the quarter, but the defense tackled Falkville’s running back in the end zone for a safety to make it a 10-0 score.

Moody then found the end zone on a 50-yard run to increase Vinemont’s lead to 18-0. The Blue Devils scored for the first time in the game on a 4-yard touchdown pass to make it an 18-6 game, which was the score at the half.

Luke Gay got things started for the Eagle defense to start out the second half when he sacked Falkville’s quarterback for an 8-yard loss, then later on in the drive, Connor Gibbs picked off the quarterback to set up Vinemont at the 44-yard line after a holding call. Long runs by Brody Speer and Thomason later set up a 21-yard touchdown pass from Thomason to Moody to increase the lead to 24-6. The Eagles later added to their lead on a 1-yard touchdown run by Kyser Campbell to put the final score at 32-6.

The first quarter saw both defenses dominate as the period ended scoreless. Hanceville started the second quarter strong as Bo Joles found Brodie Malcom for a 42-yard connection on the first play, then Logan Guthery broke free down the middle for a 26-yard gain. Joles finished the drive off with a 2-yard score to put the Bulldogs on the board with 6:48 remaining in the first half.

Later in the quarter, the Eagle defense forced the Bulldogs to turn the ball over on downs, and on the first play of its series Deacon Samples found Colby Miller for a 66-yard score to tie the game up at 6 with 2:17 remaining in the half after the failed two-point conversion. Hanceville quickly countered on its next drive when Joles connected with Garrett Riggs for a 73-yard touchdown pass on a third-and-18 play. Hanceville took a 12-6 lead into the half.

The third quarter went like the first, scoreless, and it was 12-6 going into the final stanza. On the first play of the quarter, Hanceville fumbled, and Chandler Reese recovered the ball for the Eagles; they quickly capitalized on the turnover as Samples found Nathan Whitney for a 15-yard score to tie the game at 12 with 6:32 remaining.

On the Bulldogs’ next possession, Joles pitched the ball to Guthery, who couldn’t quite handle it and Easton Whatley ended up recovering the ball for Vinemont; the Eagles picked up a huge first down on a fourth-and-1 play, which put them at the 28. On a third-and-7 play from the 25-yard line, Samples found Miller for the biggest pass off the game as the two connected for the big score to put Vinemont up top, 20-12, with 1:25 remaining in the contest after Samples scored on a huge two-point conversion.

But there was no quit in the Bulldogs as Joles ran for 17 yards to start off the next drive, then he found Guthery for 31 more. Two plays later, Joles found Riggs for a 15-yard touchdown pass to cut the lead to 20-18 as they looked to tie the game on the 2-point conversion. But a bad snap forced Joles to fall on the ball and the Eagles hung on to win.

Joles completed five passes for 171 yards and a pair of scores, plus one on the ground, for the Bulldogs. The defense forced two Eagle turnovers in the game. Malcom added an interception for Hanceville.

Samples completed six passes for 117 yards, had three touchdowns and an interception for the Eagles. Miller caught three of those passes for 101 yards and a pair of scores. Whitney added a 15-yard touchdown reception in the game as well. The defense forced three Bulldog turnovers, two of those coming in the final period.