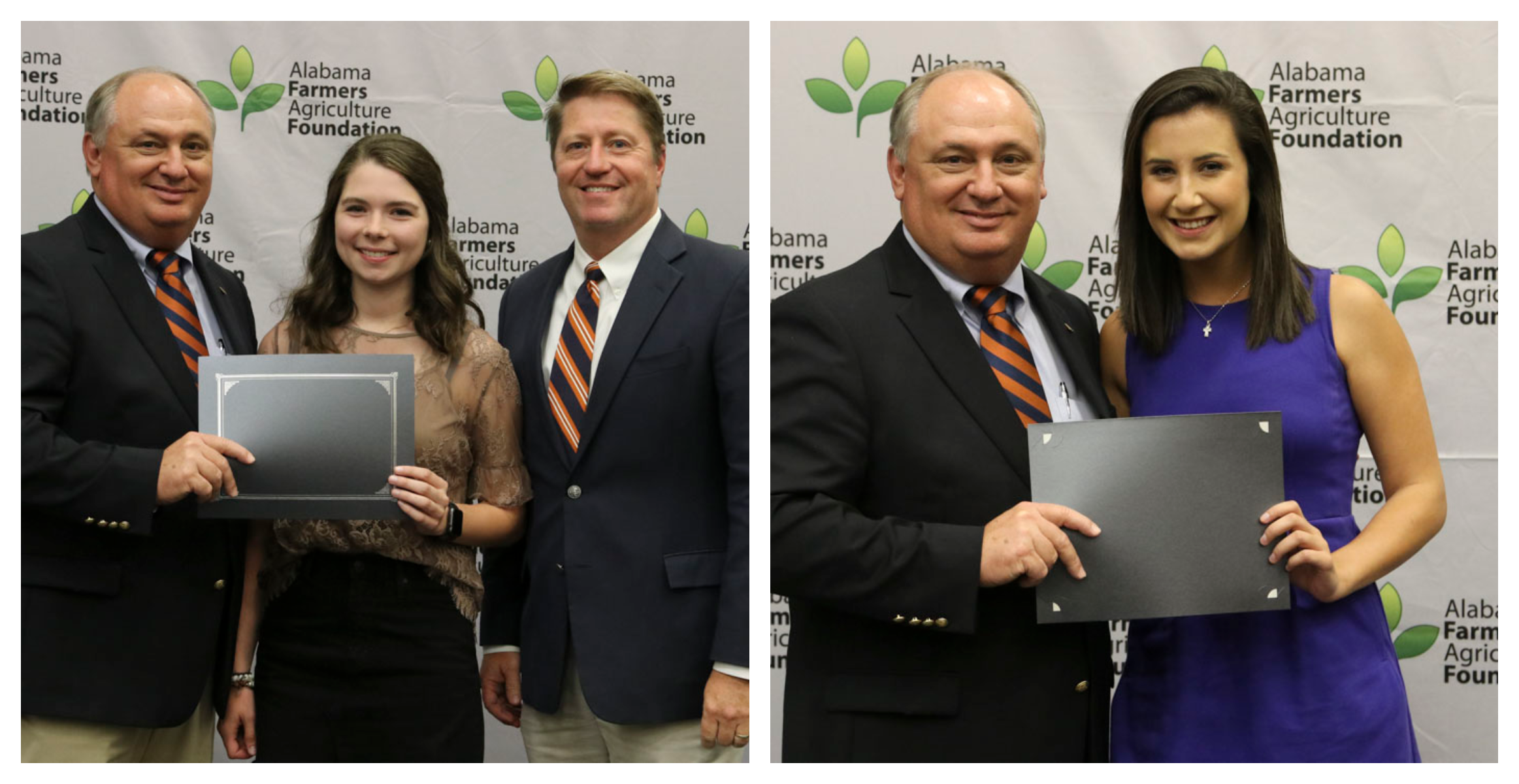 Left: Auburn University student Olivia Benefield of Cullman in Cullman County received the $1,000 R.W. Donaldson Endowed Scholarship at the Alabama Farmers Federation’s Scholarship Reception at the Ham Wilson Livestock Arena in Auburn Sept. 20. Benefield is a sophomore studying agricultural science. The scholarship is given in memory of Ronny Donaldson and was established by family, friends and members of the Cullman County Farmers Federation, as well as the county Cattlemen’s Association chapter. From left are Federation President Jimmy Parnell, Benefield, Federation Executive Director Paul Pinyan.

Right: Auburn University student Kacie Donaldson of Cullman County received a $1,750 scholarship from the Alabama Farmers Agriculture Foundation and Cullman County Farmers Federation. She was recognized at the Alabama Farmers Federation’s Scholarship Reception at the Ham Wilson Livestock Arena in Auburn Sept. 20. Donaldson is a sophomore studying agricultural business and economics and is from Cullman. From left are Federation President Jimmy Parnell and Donaldson.

AUBURN – The Alabama Farmers Federation previewed the next generation of agricultural leaders during the organization’s scholarship dinner in Auburn Sept. 20, where over $130,000 was awarded to 79 Auburn University students from 55 counties.

The scholarships fund tuition, housing or books for students majoring in agriculture, forestry or related degrees, such as crop and soil science sophomore Daniel Carter.

“This scholarship means the world to me,” said Carter, a native of Prattville in Autauga County. “It’s always been my desire to take the burden of college off my parents. This scholarship is making that dream possible.”

At the reception, Federation President Jimmy Parnell highlighted the importance of putting down roots at Auburn through educational excellence and by building connections.

“I know firsthand the connections students make at Auburn follow them throughout their career,” Parnell said. “Our recipients are future county and state leaders, and these scholarships are an investment in the future of Alabama, agriculture and the students as individuals.”

“These scholarships helped financially, but they have also given our students confidence — that someone believes in them, that they can finish their degree, that they can be successful,” she said. “I’ve seen our children grow up at Auburn. They entered as teenagers and left as young adults excited about agriculture and ready to serve their communities.”

Henry County native Kaitlyn Chestnut echoed the Adcocks, thanking the Federation for empowering her beyond covering a tuition bill.

“The Alfa community is so willing to pour into us and give us life experiences and advice,” said Chestnut, a sophomore in agricultural communications. “Every little bit counts and helps to get us through Auburn and into our careers.”

The Alabama Farmers Federation is the state’s largest farm organization with over 357,000-member families and is an affiliate of the American Farm Bureau Federation.