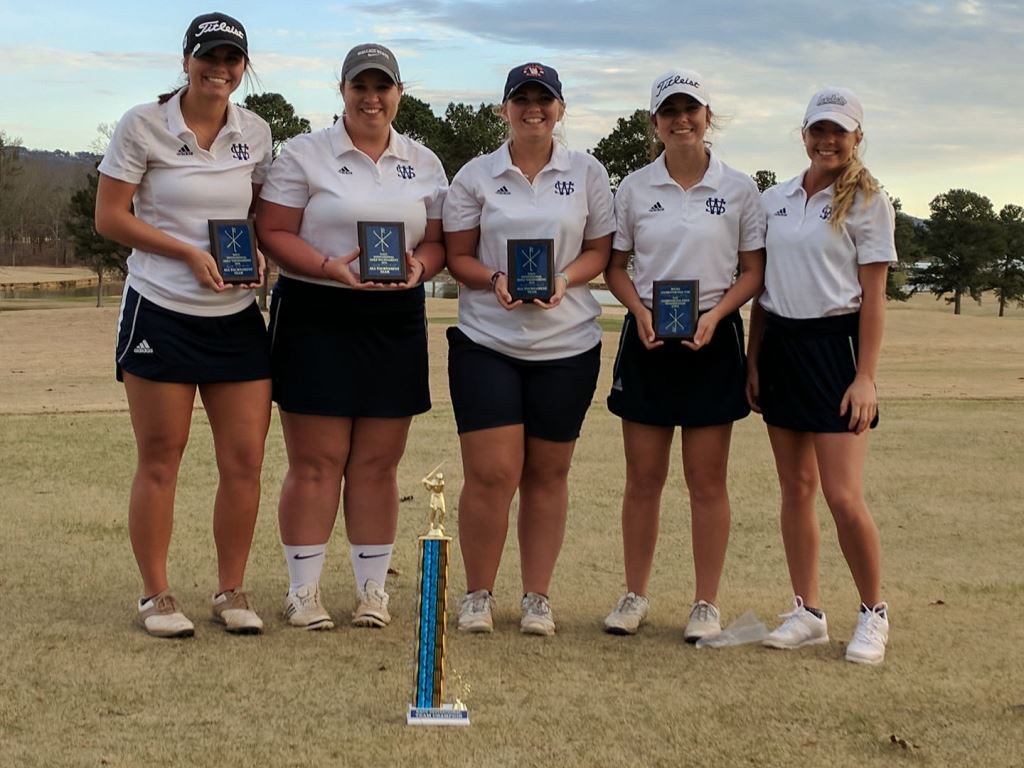 Wallace State had four golfers place on the All-Tournament team.

Annalee Stephens was the tournament’s low medalist by carding a 157 (84-73). The sophomore from Jasper was also the ACCC Tournament low medalist last April.

Wallace State’s Anna Seahorn, Michaela Bryan and Dalys Mullican each joined Stephens on the All-Tournament team. All four teammates were separated by just seven strokes overall. Seahorn finished with a 160, Bryan with a 162 and Mullican with a 164.

Anna Williams rounded out the field for Wallace State.

“It’s always great to get off to good start and win your first tournament. Our women are excited about it,” said Wallace State coach Dan York. “They now go down to Louisiana on Sunday, and we’ll see how we stack up against some four-year programs.”

The Lions are coming off a fourth-place finish in the Coastal Alabama Invitational on Feb. 18, and sophomore Brandon Lacasse was the individual tournament runner-up at Rock Creek Golf Club in Fairhope. Lacasse finished with an even-par 144 (74-70), placing one shot behind Eastern Florida State’s Fraser Davren.

Wallace State’s Anthony Lumpkin finished 10th with a 4-over 148 and sophomore Luke Wilson carded a 9-over 153. Thomas Gevas (155) and Cody Maddox (165) rounded out the field for the Lions.

Sophomore Joy Sadler registered her ninth double-double of the season for the Lady Lions in a win over Snead State this week, pouring in 27 points and collecting 14 rebounds as Wallace State finished the regular season 8-2 in Alabama Community College Conference (ACCC) action.

Before the contest, Wallace State (22-7, 8-2 ACCC) had already clinched the North Division’s No. 2 seed for next week’s ACCC Tournament at Lawson State. The Lady Lions play at 1 p.m. on Tuesday against the Coastal-North/Snead State winner.

“I think the second seed is important for our team and especially the sophomores. We didn’t have it last year. I think it gives us confidence knowing we are one of the top teams going in. We are excited about it and know it’s a big deal,” said Wallace State interim coach Jessica McBrayer.

“These ladies have been important to our program because they endured a lot of change this season. They have been consistent. They’ve consistently worked hard and consistently bought into what they were asked to do. I know I can lean on them, and I’m excited to see what they can do next week,” McBrayer said.

Wallace State’s men closed the season at 15-15 after the top-seeded Parsons used a big second-half surge to pull away for a 74-58 victory.

Wallace State freshman Demarkus Lampley poured in a game-high 30 points in the game, reaching the 30-point plateau for the third time this season and capping an impressive freshman campaign with the Lions.

Snead State, the ACCC North Division champion, used a 20-0 run to begin the second half.

Geordon Walker scored all 12 of his points in the first half for Wallace State, and Dee’Quan Fleming added six.

Fleming and Trevoris Waugh, both sophomores, were recognized before the game.

Wallace State’s baseball team travels to Andalusia on Friday, where the Lions are set to play LSU-Eunice and Lurleen B. Wallace CC this weekend.

Freshman catcher Easton Kirk collected nine RBI’s last weekend and is third in the league with 18 RBI’s thus far in 2018.

The Lions have the weekend off after being rained out at Chattanooga State on Thursday.

Wallace State softball (13-6) has won three games in a row after splitting a doubleheader against Columbia State on Monday and sweeping Coastal Alabama – North on Tuesday with wins of 3-0 and 12-9.

Wallace State softball travels to the College of Central Florida on Tuesday.