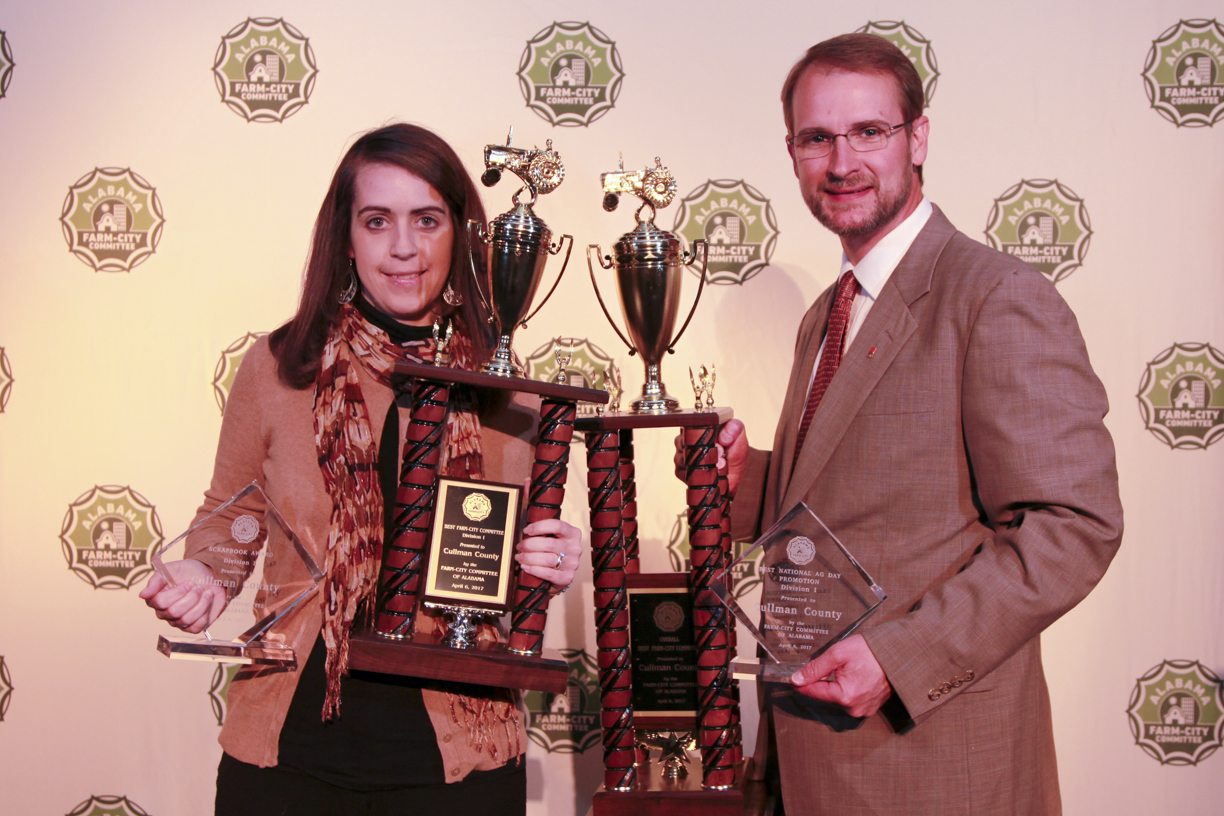 BIRMINGHAM – In 2013, Cullman County’s Farm-City Committee claimed its first state award for Overall Best Farm-City Committee. The group has not relinquished the top spot on the podium since, as the committee received its fifth overall award during the Alabama Farm-City Awards Luncheon April 6 in Birmingham.

Many in Cullman County attribute their sustained success to 2014 Cullman County Farm-City Chairman Doris Patterson, who was named the 2016 Volunteer of the Year. The retired school teacher has been involved in Farm-City for over 30 years and held almost every position on the county committee.

“I just love Farm-City. My vanity tag is for the University of Alabama, but it says Farm-City,” Patterson said. “Cullman is such a wonderful ag community.”

Patterson added that the best part of Farm-City is learning from and with hard-working Cullman County volunteers.

Houston County was named runner-up for Division I Best Farm-City Committee and won an award for Best Special Activities.

Lawrence County’s Linda Robinson was recognized with the Service Award, which is presented to an individual who goes above and beyond to promote Farm-City as part of their job. Robinson recently retired from the Cooperative Extension System after 36 years, and she served as her county Farm-City Committee chairman for 16 years.

Farm-City Week is traditionally observed the week before Thanksgiving. The program started in 1955 and continues today with county committees hosting educational events to encourage greater cooperation and understanding between farmers and city folk.

The artistic flair of kindergartners through seniors was featured at the Alabama Farm-City Awards program in Birmingham April 6, where Houston, Lamar and Shelby county students took home top prizes in poster, essay and multimedia contests.

“Participating in Farm-City contests is one way students learn about Alabama agriculture’s bounty at a young age,” said Alabama Farm-City Committee Chairman Jeff Helms. “These students are the future of our industry, and it’s important they learn the impact forestry, agriculture and related industries have on our state and planet.”

This year’s theme was “Agriculture: Stewards of a Healthy Planet.”

Each received $200, as did their schools.

In the essay contest, Shelby County’s Marion Bell of Hope Christian School took home first place in the seventh- through ninth-grade division, while her sister, Kinley Bell, placed first in the 10th- through 12th-grade category.

Marshall County’s Kaleigh Backstrom of The Way Home Christian School received an honorable mention in the multimedia contest. She and her school received $100.

Rickard’s video can be viewed on the Alabama Farmers Federation’s YouTube channel.

The luncheon was held in conjunction with the Federation’s Women’s Leadership Conference.

County Farm-City volunteers were also recognized and Alabama’s 2017 Farm of Distinction was named during the awards luncheon.