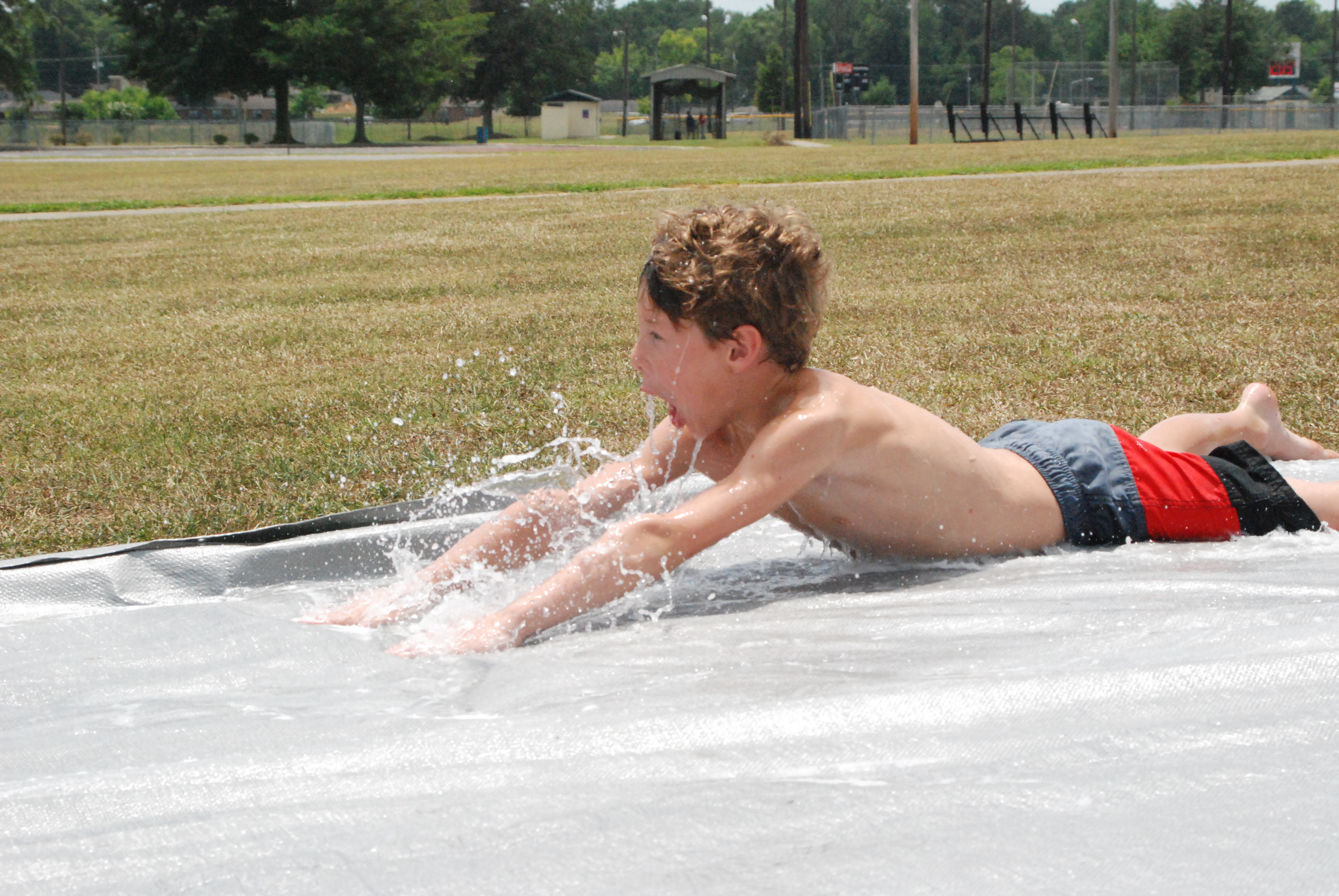 It’s easy! All you have to do is flop on your belly and fly!”
6-year-old Ansley

CULLMAN – A giant slip-n-slide on a brutally hot day? Yes, please! On Friday, children from all over Cullman met at Nesmith Park and took turns sliding across the massive slip-n-slide that was set up for the afternoon. Although the weather was steamy hot, the water was refreshing and kids of all shapes and sizes stayed cool as they sailed along the wet, soapy slide on their tummies. Squeals and laughter filled the air as the children played. The event was part of Cullman City Parks & Rec’s weekly Just Play! program.

Just Play! is a free weekly program for children ages 5 to 12. It offers organized time at the various parks and includes things such as scavenger hunts, water balloon fights, slip-n-slides, capture the flag, kickball, relay games and more.

“This is part of our free Just Play! program,” said Waid Harbison, Cullman Parks & Rec marketing, programs & events coordinator. “We do it every Friday in June and July from 1-3 p.m. We do it at a different small park and have something different for the kids to do. A lot of people are not enrolled in a summer camp, so this is a way for them to get out and have some fun and still be active during the summer. Plus, it’s free, so it’s a good thing. I think it’s a great way for the community to get together and do things with each other.

“One of the biggest things Parks & Rec did back in the day was going around to the different playgrounds and having different activities each week during the summertime,” he continued. “They did that a lot back in the 1970s and 80s, so we are really trying to bring that back; doing something fun every week at a park, something active that keeps the kids engaged.”

The children were great. They stood in line and took turns running through the grass, building up speed for the drop. Speed is a really important thing for those who want to make it all the way down the slide, you know.

“I just run and dive as hard as I can,” said 7-year-old Mason after he zipped all the way to the end of the slip-n-slide. “This is really fun… And it doesn’t even hurt when I flop on my stomach at all,” he grinned happily.

“It’s easy! All you have to do is flop on your belly and fly,” said 6-year-old Ansley just before she took off across the grass toward the water.

There were lots of mothers and fathers at the park, too. Most were cheering their children on while offering tips and tricks for the perfect slide.

“We have really been looking forward to today,” said Mary Posey, who was there with her 5-year-old son, Wyatt. “He wants to play in the water, but the first time he got on the slide, he fell and bumped his head so now he just wants to sit and play,” she smiled. “If I was prepared and weren’t so breakable, I would get out there and do it, too,” she laughed.

“We plan to keep coming to these as much as we can. He starts school in the fall, so he hasn’t been around a lot of kids,” she said. “That’s what I like; him being able to be around other kids, have fun before school starts and meet more kids.”

Friday’s Just Play! day at Nesmith Park was a success. The kids were wet, happy and pooped! If you missed this week’s event, you missed a good one! Never fear though, there are still several FREE Just Play! days coming up. Here they are: