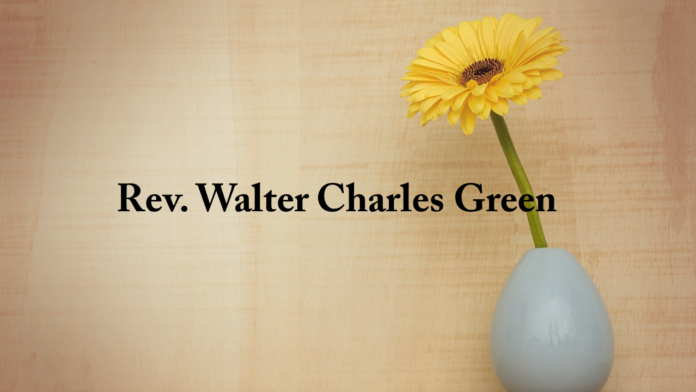 Walter Charles Green was born on Hog Mountain near High Rock Methodist Church April 7, 1938. His parents were John Robert Green and Mae Belle Johnson Green. He was the youngest of their seven children. They were a close-knit farming family who grew up working and playing together. He attended Nectar and Hayden schools. He loved his classmates and reminisced often of their good times together. W. C. graduated from Hayden High School in 1956 and began farming in the Cleveland/Nectar community.

W.C. pastored several churches after beginning his ministry in 1975. He celebrated 45 years in the Gospel ministry. He has been called the Jesus preacher. In the beginning, he was determined not to preach, and ran like Jonah. But God had other plans. In February 1975, he was being dealt with by our powerful God. He went up behind the house in the woods to pray. As he sat under a tree, a little spider on a single web came down in front of him. He reached out and smashed it between his fingers. Then he heard God say, “That’s what I’ll do to you if you don’t carry my word!” He surrendered that day and announced his call at Nectar Baptist Church.

He enjoyed his family and friends, loved talking, sharing family stories, singing, and preaching. His love for his Savior was evident in his ministry. He enjoyed farming, hunting, fishing, and watching his grandchildren in their activities.

His family was by his side during his illness, along with many friends. We are very grateful for all of the kindness shown to us during this time. His church, Fellowship Baptist Church in Cleveland, Alabama, has supported him in every way, monetarily and prayerfully. We are very thankful to our Lord for all his blessings!

W.C. passed away Feb. 10, 2020 at his residence in Rosa, Alabama. His funeral service will be held Saturday, Feb. 15, 2020 at High Rock Methodist Church with interment at High Rock Cemetery.