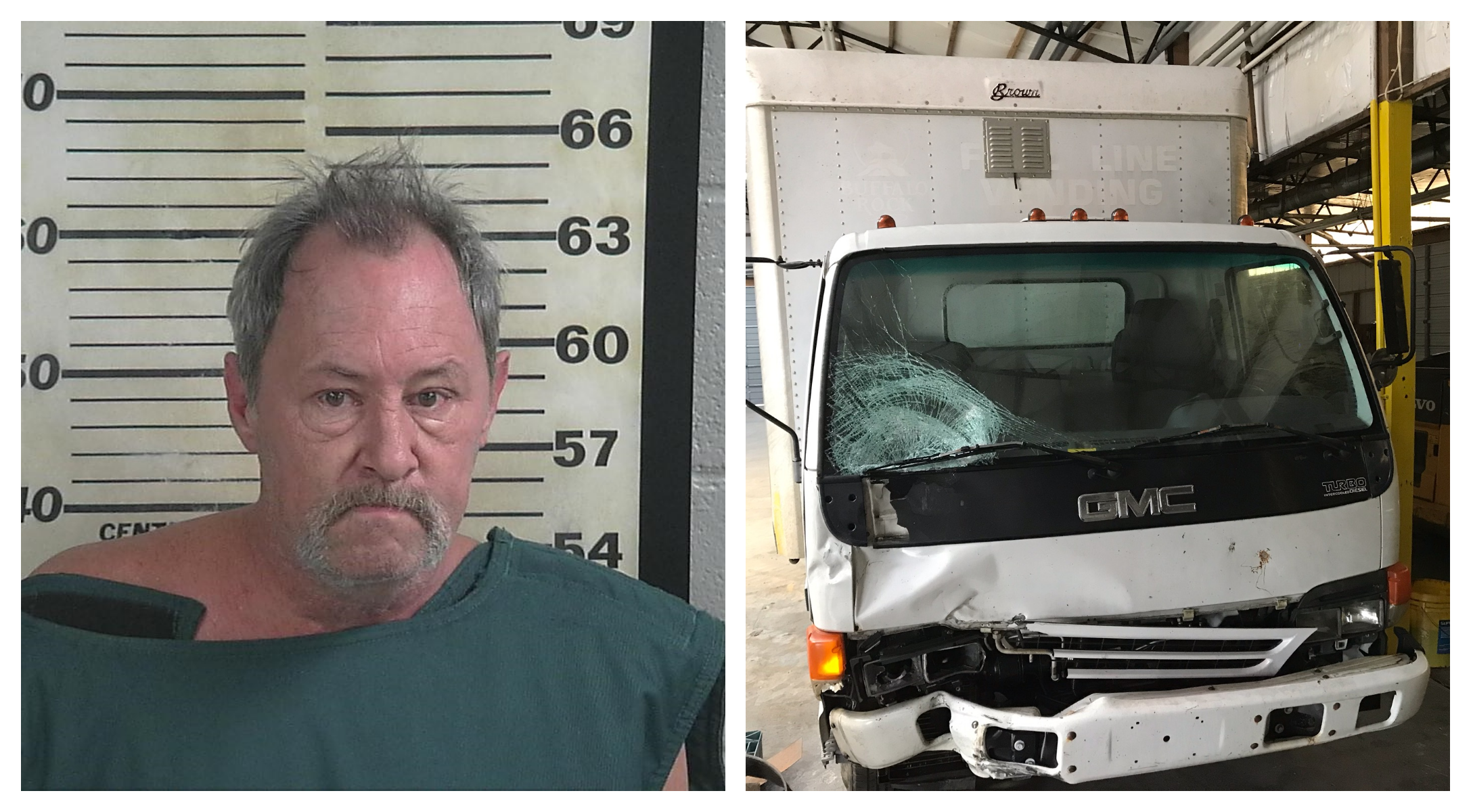 Brett Steven Amerson, left, and the box truck he was driving when he was involved in the fatal hit and run crash in Cullman County (Cullman Police Department)

CULLMAN – The Morris man charged in the Dec. 18  fatal hit and run on Alabama Highway 157 in Cullman County has now been charged with murder, manslaughter, criminally negligent homicide, homicide by vehicle or vessel and leaving the scene of an accident. Brett Steven Amerson, 54, was initially charged with, felony DUI, failure to yield right of way, operating a motor vehicle at night without headlights and driving with a revoked or suspended license. All charges stem from the hit and run crash that claimed the life of Bradley Ray Patterson, 39, of Holly Pond.

The additional charges followed a special bond hearing held at the Cullman County Detention Center on Thursday, Dec. 20 in which Amerson was denied bond. Amerson will remain behind bars until his trial. Cullman County District Judge Rusty Turner presided over the bond hearing.

Amerson was allegedly intoxicated at the time of the Dec. 18 crash and court records show he has an extensive criminal history dating back to at least 1986, including multiple DUI charges, among them felony DUIs, an attempted murder charge and a charge for discharging a weapon into an occupied dwelling.

AlaCourt records also show that warrants have been issued for Amerson in other cases when he failed to show up for court dates.

The Cullman County District Attorney's Office presented Amerson as a flight risk who is a threat to himself and others.  Assistant DA Jeremy Cline wrote in the motion, “Pretrial detention is the only option to prevent the Defendant from driving intoxicated and taking another innocent life,” and, to the degree it needed to, the court agreed.

Two other alleged drunk drivers who were involved in fatal accidents in Cullman County in the last two years have been charged with reckless murder. (See www.cullmantribune.com/articles/2017/10/30/ohio-man-indicted-reckless-murder-deaths-cold-springs-student-rhianna-busbee-and and /www.cullmantribune.com/articles/2017/10/10/brad-meeks-indicted-reckless-murder-wreck-killed-chs-student-curtis-wilson)

According to Cullman Police Lt. Jeff Warnke, Patterson, driving a newer model Harley Davidson motorcycle, was traveling southbound on Hwy. 157 at approximately 5 p.m. when he was struck by a white 1998 GMC box truck that failed to yield the right of way when turning left onto Interstate 65 South. The driver of the truck, identified as Amerson, did not stop, instead continuing onto the interstate, prompting the Cullman Police Department to issue an alert to area law enforcement agencies in an effort to locate the vehicle.

Shortly before 7:30, Amerson was located, 21 miles away from the scene off I-65 Exit 291. Sgt. Cindy Rohrscheib said the truck was found at a truck stop off of Alabama Highway 91.

“Mr. Amerson was found due to the diligent hard work of Lt. Daniel Cummings of the Cullman County Sheriff’s Office,” said Warnke. “He made a traffic stop and was able to apprehend Mr. Amerson, 21 miles away.”

"The sheriff's department did great work in being able to locate and stop him," said Cullman Police Chief Kenny Culpepper.

Warnke said, "This is a felony hit and run. The case will be taken to the district attorney and then grand jury.”

Warnke said Amerson’s blood alcohol content (BAC) was “somewhere in the neighborhood of .26” on a partial breathalyzer done when he was found.

“He refused the test at the jail,” said Warnke, “the breath-testing device housed there at the jail that we can use at court. The portable ones (like the one done when he was found) we can’t. But we did do a forensic blood and urine kit on him that will be sent to the state and will be used as evidence at the trial.”