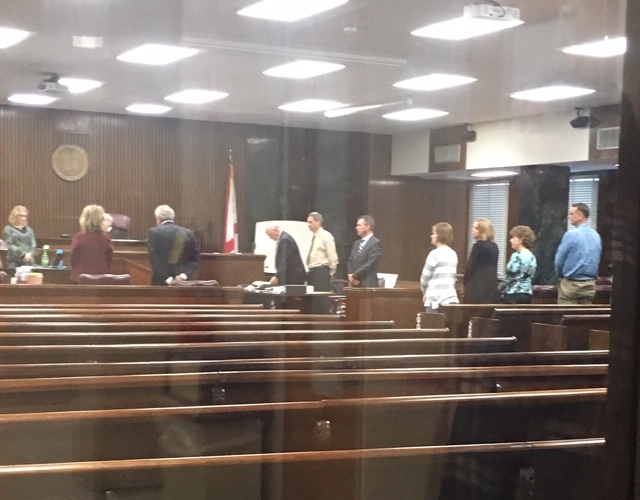 CULLMAN –  In a dramatic courtroom drama Wednesday morning, a mistrial was declared and charges dismissed against former Cullman High School Principal Dr. Elton Bouldin. The move came after a conflict of interest between a juror and a witness arose and allegations of false testimony by witness Justin Butts.

Former Cullman High School Principal Dr. Elton Bouldin was back in court Tuesday for a third trial, facing third-degree trespassing charges stemming from an incident in April 2016 when he and Cullman High School Assistant Principal Mark Stephens went to the home of a student, Justin Butts. The two educators entered the home- Bouldin says they were invited in; Butts says they were not. Justin Butts' mother, Julee Butts, later swore out a warrant against Bouldin and Stephens, who subsequently turned themselves in and were released the same day. The trial is being presided over by former Jefferson County Circuit Judge Scott Vowell.

Jury selection took up half of the day Tuesday, with testimony beginning after lunch. Justin Butts and Julee Butts each the stand. Bouldin is being represented by local attorney Champ Crocker.

The trial is set to resume at 9 a.m. Wednesday.

Bouldin was found guilty of the charges on Oct. 13, 2016 in a bench trial presided over by Cullman County Circuit Judge Martha Williams. Following the guilty verdict in his bench trial, Bouldin was sentenced to 10 days of labor and a $200 fine; however, Williams suspended his sentence and instead placed Bouldin on unsupervised probation for six months. On a second charge, failure to report an incident of school violence, Williams found Bouldin not guilty. He had two weeks to appeal the ruling. He appealed that verdict on Oct. 25, 2016, requesting a trial by jury.

Trial number two, a jury trial, ended in a mistrial on Aug. 22, 2017. That trial was also presided over by Vowell. It was originally assigned to Cullman County Circuit Judge Greg Nicholas, who quickly recused himself following the assignment.