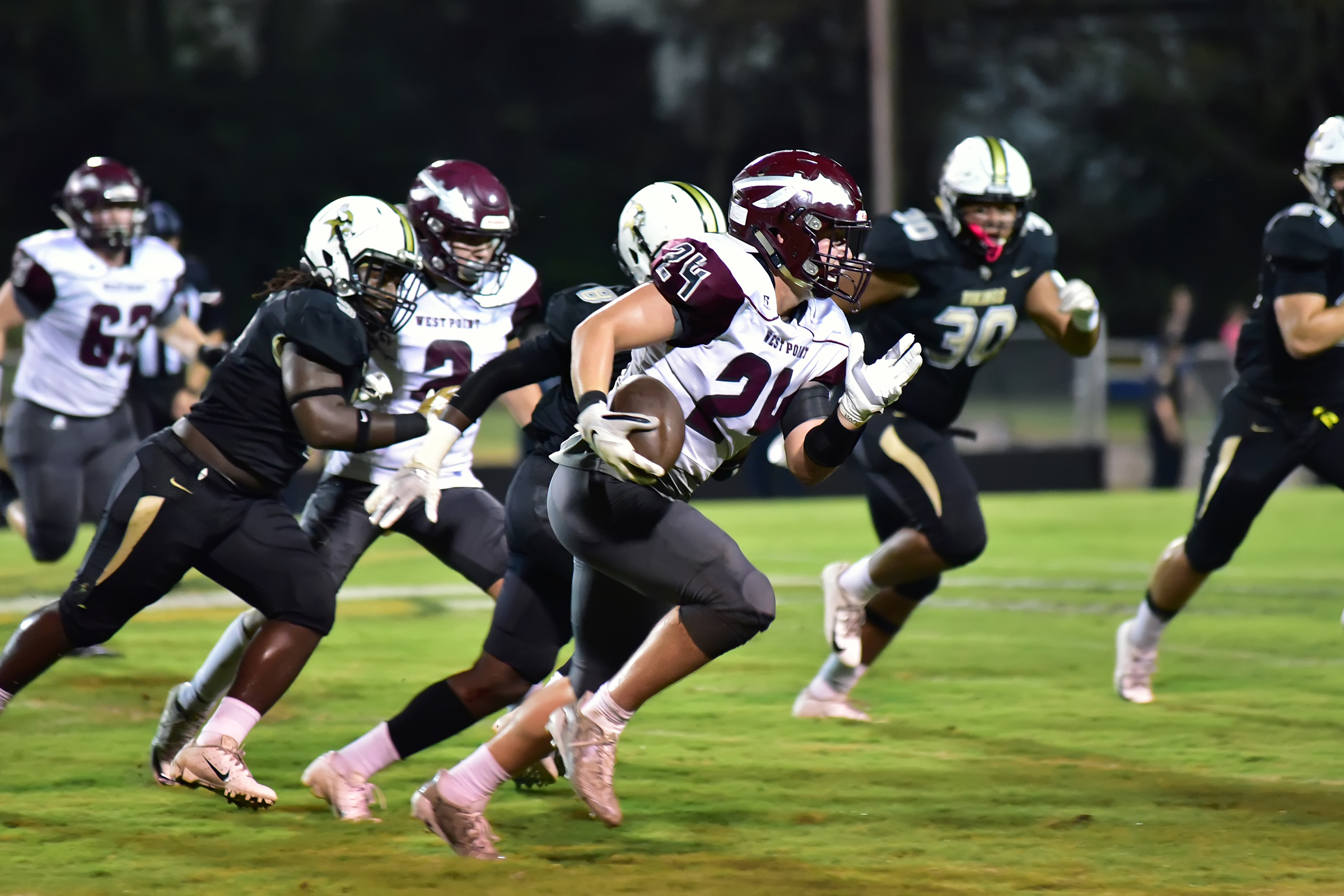 West Point running back Hunter Persall speeds past a Jasper defender during the Warriors’ 54-20 loss to the Vikings. (Bill Piper for The Cullman Tribune)

JASPER – The Jasper Vikings Improved to 5-1 on the season and remained unbeaten in Class 5A, Region 7 at 4-0 with a dominate 54-20 win on homecoming Friday night over region foe West Point.

“It is a region win, and it was a win on homecoming with a lot of other stuff going on,” Jasper Coach Bryan Moore said. “We did some things early that we can’t do as we move forward. We turned the ball over again in the first half. That is something that we have to correct. We had some bad penalties and made some bad decisions at times.

“We also did some good things,” he added. “We moved the ball well, and we put points on the board, but we left some that we should have had. I’m proud of our guys. We are 5-1, and we are undefeated in the region. That is something to be happy about.”

The Jasper defense held West Point to only 74 yards on the ground but gave up 201 through the air. The Warriors finished with 275 total yards.

The Vikings opened the scoring on the night when Crear hit Waldrop on a 9-yard touchdown pass with 9:14 left in the first quarter. Both offenses stalled through the remainder of the first quarter with Jasper leading 7-0.

Shelton scored his first touchdown on the night after only 46 seconds had passed in the second quarter to give Jasper a 13-0 lead. The Warriors answered with their best executed drive of the night when Hunter Persall scored on a 1-yard run to cut the lead to 13-7 with 6:56 left in the first half. A few plays later, Jasper answered that score with a halfback pass from Shelton to Waldrop. Both teams added scores before halftime with Lambert and Shelton scoring for Jasper and Rylan Jones scoring for West Point. The Vikings led at halftime 34-13.

Jasper scored on the opening play of the second half when Crear hit Bonner on a 66-yard pass. Jasper led 41-13. Lambert scored on a 3-yard run later in the third quarter to give the Vikings a 48-13 advantage.

West Point drops to 1-5 on the year and is winless in the region. The Warriors will play Dora at home next week.