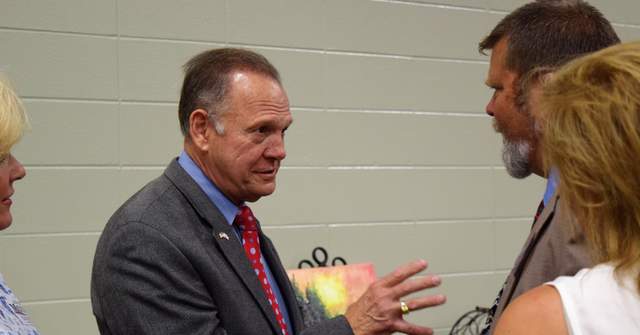 ALABAMA –  Political leaders from around the state are responding this afternoon to the allegations that surfaced this morning in a report from The Washington Post that Roy Moore initiated a sexual encounter with a 14-year-old girl when he was 32, and an assistant district attorney, in 1979.

These allegations are deeply disturbing. I will hold judgment until we know the facts. The people of Alabama deserve to know the truth and will make their own decisions.”

The allegations made against Roy Moore are very serious. If the allegations are true, then he does not need to be the Republican candidate for Senate."

The report says Moore approached the girl, identified as Leigh Corfman, outside a courtroom in Etowah County.

Further, it says Moore volunteered to watch the girl while her mother went in the courthouse for a hearing. It alleges that Moore asked for the teen's phone number, and that on a visit to see her, Corfman claims Moore removed her shirt and pants before touching her and guiding her to touch him over his underwear.

The Washington Post claims to have spoken to three other women who claim Moore pursued them while they were between the ages of 16-18. None of those women say Moore forced them into a sexual encounter.

Moore, who is just one month away from the U.S. Senate special election against Democrat Doug Jones, responded fiercely through a statement from his official campaign:

Today, the Judge Roy Moore Campaign for U.S. Senate issued a statement responding to yet another baseless political attack by the Washington Post, a paper that has endorsed Judge Moore’s opponent. Moore campaign chair Bill Armistead released the following statement on Thursday afternoon:

“Judge Roy Moore has endured the most outlandish attacks on any candidate in the modern political arena, but this story in today’s Washington Post alleging sexual impropriety takes the cake. National liberal organizations know their chosen candidate Doug Jones is in a death spiral, and this is their last ditch Hail Mary.

“The Washington Post has already endorsed the Judge’s opponent, and for months, they have engaged in a systematic campaign to distort the truth about the Judge’s record and career and derail his campaign. In fact, just two days ago, the Foundation for Moral Law sent a retraction demand to the Post for the false stories they wrote about the Judge’s work and compensation. But apparently, there is no end to what the Post will allege.

“The Judge has been married to Kayla for nearly 33 years, has 4 children, and 5 grandchildren. He has been a candidate in four hotly-contested statewide political contests, twice as a gubernatorial candidate and twice as a candidate for chief justice. He has been a three-time candidate for local office, and he has been a national figure in two ground-breaking, judicial fights over religious liberty and traditional marriage. After over 40 years of public service, if any of these allegations were true, they would have been made public long before now.

“Judge Roy Moore is winning with a double-digit lead. So it is no surprise, with just over four weeks remaining, in a race for the U.S. Senate with national implications, that the Democratic Party and the country’s most liberal newspaper would come up with a fabrication of this kind.

“This garbage is the very definition of fake news and intentional defamation.”

On Thursday, Judge Moore called the allegations by the Post “completely false and a desperate political attack.

Mitch McConnell and chorus of Republican senators call on Roy Moore to step aside in Alabama Senate race https://t.co/hhNCkSem06

While in Alabama reporting about supporters of Moore’s Senate campaign, a Post reporter heard Moore allegedly had sought relationships with teenage girls.

Over three weeks, the Post interviewed four women, all of whom were initially reluctant to speak. https://t.co/X5c03FPnXK pic.twitter.com/g0bVtHckG5