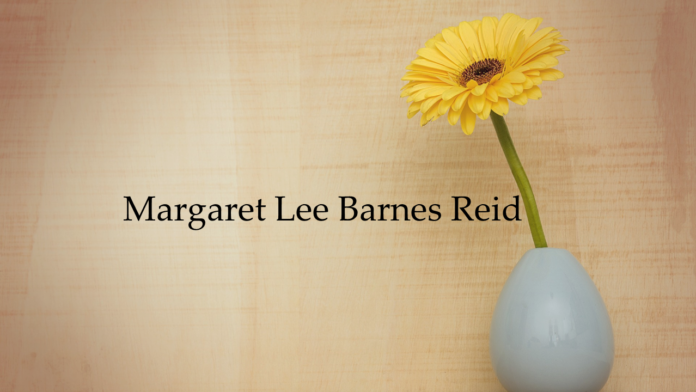 A native of Holly Pond, Mrs. Reid was preceded in death by her husband of 63 years: Austin H. “Pat” Reid; parents: Hobson and Florene Barnes and her sisters: Ruth Moore and Faye Nail.

She is survived by her sons: Austin H. Reid, Jr., (Jan) and Alvin Lee Reid (Pam); her grandchildren: Josh Reid (Jacqueline) and Hannah Bolton (Corey); her great-grandchildren: Lincoln and Juliet Bolton; her nephew: Greg Nail; her niece: Teresa Reid, as well as many more beloved family members and friends.

Margaret married Pat after graduating from Holly Pond High School. After his time in the Army, which took them to Virginia and to Colorado, they finally settled in Birmingham, Alabama, where they raised their two sons. They returned to Holly Pond, upon retirement, where they resided for the rest of their lives.

Margaret was a long-time and active member of Holly Pond First Baptist Church, as well as the Holly Pond Homemakers Club.

Margaret was the most generous and loving person ever known. She loved her family greatly, and everyone felt at home the moment they stepped into her house.

Visitation will be on Thursday, March 3, 2022, at 10:00 a.m., followed by a funeral service at 11:00 a.m., at Holly Pond Funeral Home with Pastor Benjamin Smothers officiating. A graveside service will follow at Holly Pond Cemetery, where Josh Reid, Corey Bolton, James Reid, Jarod Mayfield, Greg Nail and Norman Nail will serve as pallbearers.

Obituary provided by the Reid family.